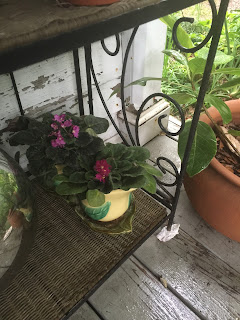 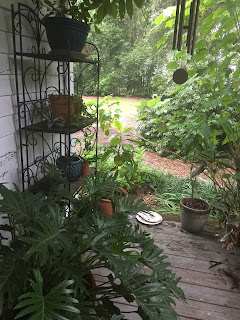 This is what it looks like at one end of my front porch in Lloyd, Florida today and I am, for the first time in over a week, alone. It is raining gently here and coolish and the chickens are pecking out in the rain and going about their chicken business and I had dreams like movies last night, one of them a sort of video-game science fiction thing where the only way to escape the evil was to make moves and figure out what my powers were and how to access them. It was frightening as hell and I had to protect Lis and I kept waking up and then falling back asleep and falling right into the dream again until I finally got up for awhile to shake it out of my mind.

Here is the end of the balcony at Casa Miranda where Lis and I stayed in Cuba. 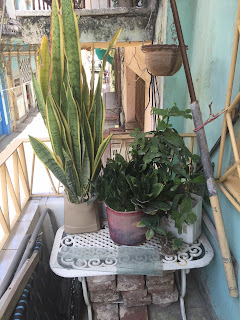 You can see why I felt a bit at home on that tiny balcony overlooking the narrow street between the old beautiful buildings, now cut up for housing into tiny, hot apartments with fans mounted on the walls. So much life spent on those tiny balconies where people came out to try and catch a breeze, to hang laundry, 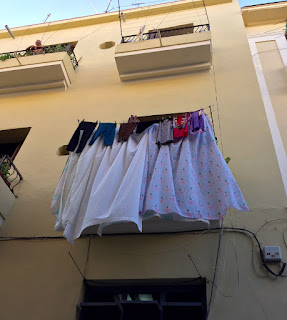 to keep some plants to provide a bit of green in that huge city, to simply observe what is going on and there was always, always something going on at every moment of the hottest hour of the day or the coolest hour of the night. 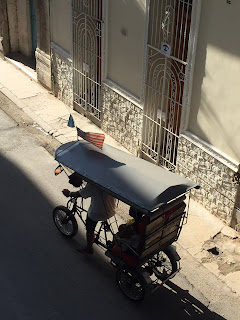 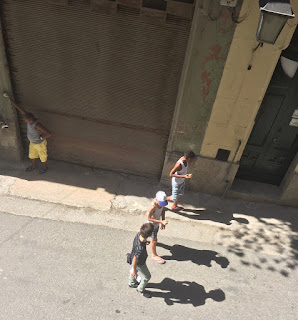 But wait. Let me go back.
And here's the thing- where is the beginning? It's so much like thinking of Cuba itself where I kept finding myself asking, "But what came before this? How did this lead to this? Where will it go? What does this mean? How is this possible? Why is the answer to this question different each time I ask it of another person?"

But. My beginning in this journey of course came from that phone call that Lis made me two weeks ago where she said, "There's a spot opening up. Can you come?"
And of course I dithered and pondered but there was really no time for that and finally it hit me with the force of a ton of bricks that the only answer to that question was yes because I am a human being and as such, am filled with perhaps even more curiosity than I am of trepidation and I would never get this opportunity again and the next thing I knew I was talking to a man named Yosi McIntire on the phone with his wife in the background (and they were in Sicily!) and I was finding documents online to fill out and print and panicking and yet, determined.
Yosi and his wife of forty-two years, Soledad Pagliuca, are absolutely some of the most amazing people I've ever met. They travel the world and they lead groups to some of the places they love. They speak several languages and as I ask myself another question- WHY AM I SO GLAD I WENT ON THIS TRIP?- one of the first answers to spring to my mind is that I got to meet and spent time with Yosi and Sole.

Lis and I were the last to get to Miami and got to the hotel where we were all staying right after the initial meet-up had begun in the lobby.
"You're buying the first mojitos!" said Soledad and I came to learn that whenever anyone was late, they were threatened with having to buy mojitos for all.
And then I noticed that Sole had...wait for it...a diamond in one of her front teeth.

Over the days we were with them, my respect for them and delight in their company only increased.
Here they are, dancing at a restaurant where music was being played. 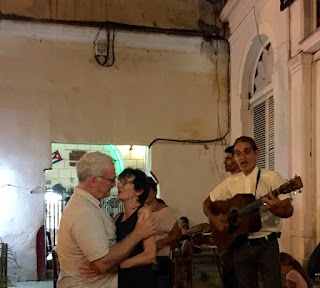 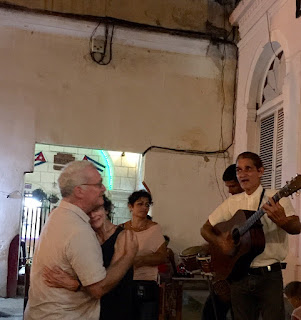 They had so many friends in Cuba. The first we met was our bus driver whom we called Sobe because when he wasn't wearing his official bus driver suit, he dressed like a guy from South Beach and he, like all of the men we met through them, is in love with Sole. They would flirt outrageously and Sole would curse in Spanish, rolling her r's, making him laugh. They not only kept up with the entire group, energy-wise, but when we'd all get back on the bus at one or two in the morning, one of them would crack a bottle of Havana Club rum and pass it around, continuing the merriment, the joy, the celebration of each evening.
And then, when I'd get up in the morning and go out to the little balcony, there would be Sole, standing at her balcony across the way. 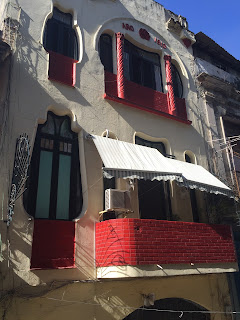 "Good morning, Mary!" she'd call. "Have you and Lis had breakfast yet?"
And so the day would begin and soon we'd all meet up again and get on the bus or go on a walking tour, always stopping for the best lunches.

But wait. Again. I've gone off my path. I am wandering around like the day Lis and Jim Quine and I stopped to talk to an old friend of Jim's when we were on our walking tour and lost the group and spent forty-five minutes trying to find the Street of Barbers where we knew our people were eating lunch somewhere.
Here is the friend. 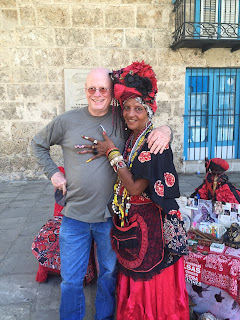 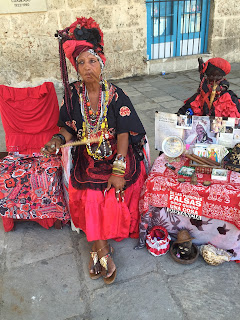 I mean- wouldn't you stop? How could you not stop? They are old friends and he has taken her photo many times and so there was much talk and laughter and hugs and hugs and hugs.
And then we were lost except that we knew we were going to the Street of Barbers and so we went from taxi driver to police officer to ordinary citizen asking, "Por favor, donde esta la Calle de Barberos?"
And no one knew but finally someone did and there was the street and there were our people, settled in to a beautiful little restaurant, just ordering drinks, and everyone was glad to see us but no one was worried although everyone was a bit worried about one of us whom no one had seen since the hotel where they sold cigars. We found him though, when we delivered the people back to the hotel where the non-musicians were staying. He was sitting at the bar, having a beer and again, all was well, and again, I have gotten so far off my train of thought that I'm going to have to take a break here, do a few domestic chores, enjoy this rain and solitude, collect myself and begin again soon.

I think I am not going to worry so much about the continuity of this story. Fuck continuity. Continuity may well be a human construct as everything is happening at the same time over and over again and will be and has been and it may all be a dream anyway.

Thank you for coming along down these wandering paths with me, for letting me tell you about this particular dream which is a dream of Cuba that I had. Truly, it might as well have been a dream with all of the vivid images of dreams and the lack of logic of dreams and the eternal questions of dreams which are...what did that mean and where did that come from?

See you in a little while.