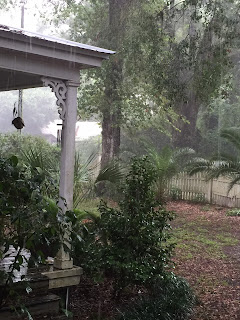 The rain pours down and twenty minutes ago I was in the garden with the chickens, pulling weeds as fast as I could because I knew the storm was coming. 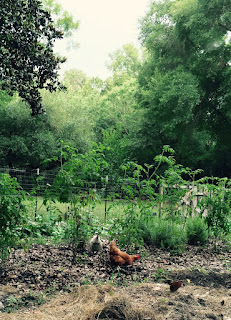 I didn't get a whole lot done but at least my bonsai okra is cleared out, the finished up cilantro pulled, and a few of the weeds pulled from around the cucumbers. I love to work with the chickens around me. They are so companionable, so busy scratching and bug snatching and pecking at whatever they can find. 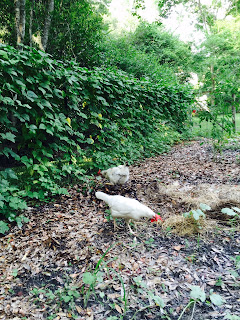 They neither ignore me nor pay attention to my presence unless I throw them a centipede. They know I'm there but I am of no more importance to them than the squirrels in the trees or the thunder beginning to rumble from the south. I wonder why I feel so soothed and comforted by this, by their mere uncaring company? Some people love the way dogs are so devoted to them, the way they listen to them, react to their every move, so obviously need them. Not me. I feel far more comfortable with the chickens and the cats who cannot be coaxed to do one damn thing they don't want to do but I will be honest with you- I feel honored when the cats do decide to keep company with me and like this morning when I woke up to find Maurice snuggled beside me in my bed, I am loathe to break that spell.

But the chickens fled for shelter when I did when the rain began to pour down upon us. I came in to find shelter myself, stripping myself of my muddy clothes in the laundry room and I set the tomatoes and cucumbers I'd brought in on the towel beside the sink after I rinsed them off. We are not getting a great harvest of either but a few. A few. Enough to goad me gently on in my garden efforts.

I did not do much today. I realized, a few hours after writing my earlier post, that my nervousness had bled into anxiety. I lived with it for quite a while and then took one of my precious hoarded Ativan and then got out my Old Navy dress and quite carefully and with unusual (for me) care, I measured and marked the hem where I wanted to cut it and did that and then got out the old, old Singer and hemmed it up. I am happy with it now, and even took in the seams a bit under my arms where it was a bit gappy. I will wear it with a sequined scarf that Lis gave me years ago when we go to the Fabrica de Arte Cuba which is where Lis and the other musicians will be playing which is supposedly the hottest place to be in Havana, where even Mick Jagger played and danced when he was there with the Stones. I found a video about it and watched it and I realized that it doesn't matter what I wear because like Asheville, it is way too cool for me and it doesn't matter, doesn't matter a bit.


And I tried on my incredibly glittery faux Birkenstocks and they pleased me with their golden hippie funk and I tried to imagine what it's going to be like to be there with Lis and with Sam Pacetti whom I've known forever, since he was eighteen and I gave him a shot of rum before he went onstage at the Gamble Rogers folk festival in St. Augustine and somehow I can't reconcile all of this but can you imagine what it's going to be like?
No. Nor can I.

I have been thinking about what my true role will be in this trip. Of course many, many Americans have visited Cuba already in the last few years and I have no music to offer, no charismatic musician glow or charm to shed. All I will have is my very own self. American, yes, but truthfully, I can be nothing more than a representative of what I am, which is a woman who is getting on in years, who has grandchildren and who grows things in the dirt and who cooks, loves, and keeps chickens.
Will this be of any value whatsoever?
Will I get to talk to anyone on a heart-to-heart basis?
I wish I could still dance the way I used to dance before I completely fucked up my hip (dancing). I wish I could speak Spanish beyond the merest tourist bullshit.
Gracious.
Por favor.
Muy rica.
Buenos dias, buenos tardes, buenos noches.
Gracious por tu hospitalidad.
Donde esta los banos?
Perhaps all I need to know is this:
Mi nombre es Maria Luna. Como te llamas?Estoy tan feliz de estar en Cuba. Su pais es hermoso.
And perhaps, Si, uno mas Cuba Libre por favor.
Or is that political?
I suppose I will find out.

The rain is still coming down. I swear, the very sky and air are green. Mr. Moon is off fishing for catfish. I am going to heat up last night's rice and green beans tangine.

Here is what I will supposedly be doing next Saturday:

Canon shoot? Really? Okay. Okay. But old Havana!
Why do I feel as if I have been there before?
Once again, I'll let you know when I return.