Life really is funny. Lately I've been wanting another plant stand to put on the front porch for smaller plants that need a little more exposure to light than what they've been getting, tucked here and there in protected places. But I haven't gone shopping for one because even the funkiest shops ask the most outrageous prices for such things, even the really old ones, and I'm cheap.

So this morning when I walked to the left instead of the right, I passed the home of a guy I've talked about before. I call him the "No Man Lord!" man because he had a homemade sign in his yard for years with that message on it. His yard changes daily. He collects things (and I don't know where or how- he has no vehicle) and makes little altar-like displays and he also sells things. Lawn mowers, old kid bikes, firewood, stuff in general. And today I saw that he had a plant stand out front. I did not stop but texted Mr. Moon about it and he said he'd stop on his way home and how much did I want to offer?
I said that twenty bucks would be more than reasonable if it was in decent shape and when Mr. Moon got home, he told me that the man wanted ten bucks and that he was going to go back and get it in the truck. And so he did. 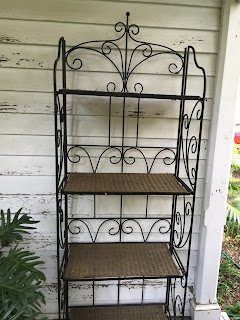 I made room on the porch for it and there it is. And Mr. Moon reports that the man was so grateful to get the money because he needed eight more dollars to pay his water bill and so ten was a blessing. He is strong on blessings.
So, in that way, he and I have much in common although he believes in the blessings of the Lord whereas I mostly believe in blessings of the heart.

And who knows? Maybe he's right. I sure can't say for certain.
But I love my new plant stand. Here it is in the initial plant-arrangement. 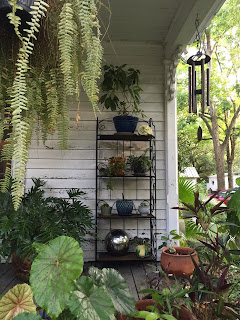 It pleases me a great deal.

It's been that sort of day. Everything has given me pleasure. All of the little things I've done around here from this 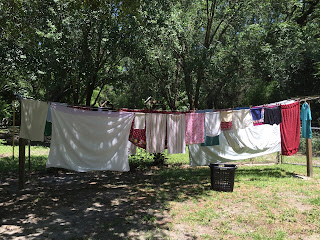 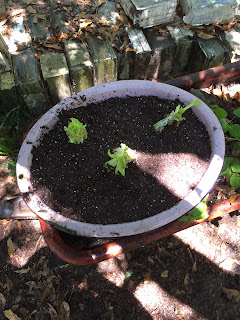 which is my silly little experiment to see if I can actually grow some damn romaine lettuce from what I would normally throw into the compost. I took the ends of the romaine and put them in a dish of water and let the new leaves begin to grow and have transplanted them into an old baby-bathtub which Mr. Moon brought me home from the dump which itself is set in an old kid's little red wagon which also came from the dump where I have lemon balm growing. Most likely either the chickens will eat them or they'll die because this is NOT the time of year to plant romaine but whatever- it gave me pleasure today, tucking those little plants into potting soil.

I also made a beautiful venison spaghetti sauce with every vegetable in the world in it (that's a lie but there are a lot of vegetables in it) which has been cooking in the slow-cooker for most of the day and a loaf of oatmeal/rosemary/kalamata olives in it for our supper.

I've wondered before if I am a bit bi-polar. NOT MUCH! But when I have a day like this wherein I can appreciate with true, simple bone-knowledge the beautiful life I have, I can't help but fear that the next day will bring me a swing downwards and I'll have to pay for such sweet contentment.

What will be will be and forty-years ago right now I was in labor with Hank and had been since early morning and tomorrow will be his birthday. I am remembering that. Twenty-one years old and having my first baby and all these years later and looking back, thinking what a life.