A Good Walk On A Pretty Day 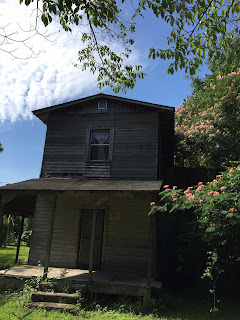 This morning instead of taking a right when I left the driveway, I took a left, down the sidewalk to the county line- something I rarely do. Not sure why I did it. But it's good sometimes to go left when you usually go right. I passed houses, both occupied and un-, houses that I drive past at least several times a week on my way to town. You see so much more when you walk though. Dogs and creeklets and yard decorations and blackberry bushes and you can wave and say "howdy" to people on their front porches.
It was a nice walk and I explored a little bit to see if my old blackberry picking place has been overtaken by the wild grape vines (it has), to check out an abandoned house set back into the trees a bit. Something about these old houses makes me want to fix them up and move into them and of course I'll never do that but oh! the stories they could tell and wouldn't they, the houses, love it if someone loved them again?

Ah well. I am happy to make-do with my own beloved house where I have laundry on the line, a cat on the table keeping me company, the fan going behind me.

So much going on in the world right now. Looks like Hillary is going to be the Democratic nominee and so many Bernie believers and supporters are losing their minds. Hey! I loved the guy but how can anyone in their right mind refuse to vote for Hillary because she's not Bernie? Are they insane? I stumbled on a pro-Trump FB post the other day (via a "friend" of mine who is, of course, no friend of mine at all) and was so horrified by what I read that I just had to stop reading. Believe it or not, there are many, many people in this country who support that "poorly formed wax sculpture of a person" (and check out the link because I love Trae Crowder and you will too) for whatever asinine, ignorant, stupid, racist, misogynist, assholiness reason or another and if people with some modicum of decency don't get off their disappointed butts and vote for Hillary, he could actually win.
As we all know.

But anyway, for right now, we still have Barack Obama as our president and Michelle Obama as our First Lady and hey! The Rolling Stones are playing Las Vegas in October!
Also, I have air conditioning, plenty of coffee, leftover pineapple chicken for lunch, sheets on the line, a husband who leaves me love notes almost every morning while I slothfully slumber, and two grandsons who are coming to spend the night tomorrow, one of whom asked me on Tuesday night if someday he will have a big butt like mine.
This was far easier to answer than his question about whether or not he would someday get old and get deaded and I laughed and laughed.
And told him that yes, he most certainly will.

But we can vote. And sometimes as much as we want to walk as far left as we can, we have to remember that some left is better than completely insane right.
Which makes little sense but you know what I mean.