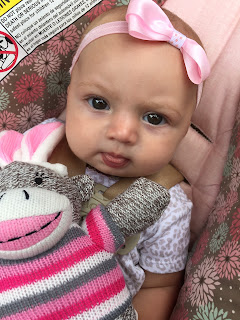 It has been quite a day here for me in my little world. First off- I got to spend some time with that girl. Is there a cuter baby in the world? I dare you to show me one you think can compare.
Well, unless it is your child or grandchild and then I am certain that that particular baby is just as cute (almost) as this one.
The little tongue. The rosebud mouth. The pink hair ribbon. The monkey-bunny. The eyes. Oh, those eyes, so big and thoughtful! At this point in my life you would think that I would be reasonably inured to such baby charms.
But oh, I am not. Nor will I ever be.
When I am on my deathbed, bring me a baby and plenty of morphine and I will go out the happiest woman who ever lived.

We had a good lunch, Hank, and Lily, and the boys and Maggie and I. Hank is planning on having Owen and Gibson over to spend the night next Friday and they were busy over lunch making plans, discussing what they would eat (pizza) and what they would watch on TV until late, late at night. Owen is beside himself with joy over the prospect and Gibson is highly intrigued.
After lunch I did some more shopping. Fuck that shit, I am done, done, done.
I went to Marshall's and got a shirt and some glittery, faux Birkenstocks. Then I finally bit the bullet and went to Old Navy where some sort of high-frequency sound was whistling and babies were crying and it was hell, Dante's hell, or at least some level of it, and I found the almost exact replica of that Sundance dress but in a fabric so cheap and weird that it may have had its origin as a plastic picnic table which had been made from recycled water bottles and another dress that was similar and I bought them despite their weirdness and the horrible, sure and certain knowledge that they were made by enslaved toddlers in a country I've never heard of and that I am personally destroying the planet and violating every human right known to humankind with my selfish, needless purchase.
I bought a T-shirt too and I'm not even going to discuss the linen overalls.
I am sure that the Cubans will be mightily impressed by my sartorial ways.
Or that, more likely, they will never even note my presence. I am, of course, an old woman and therefore, invisible.
Which is vaguely and yet truly reassuring.

Oh god. I finally got home and had a message from the guy in charge of the Havana trip and my e-mailed documents were unopenable and my real, for sure documents have not arrived in their envelope and so I've re-sent all of the e-mailed ones an assured him that the real ones would arrive tomorrow and then I went out and picked green beans which are apparently not nearly close to the death I had imagined them to be two weeks ago. A startling and miraculous recovery! 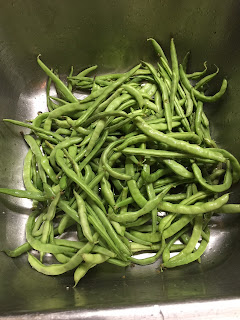 There are more there than it looks like and the mosquitoes swarmed me as I picked and I probably got one bite for every bean represented. Oh well.
Perhaps I will make this with them tonight. 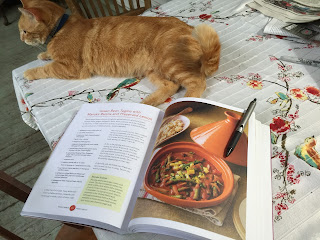 which is to be found in this cookbook 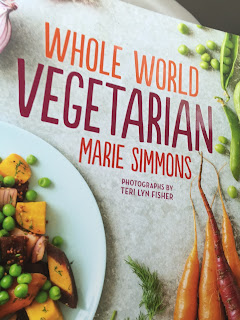 which I received in the mail today from Rebecca and I swear to you- I want to make every recipe in that book.
Every. Recipe. In. That. Book.

So tonight I believe I will start out with the Green Bean Tagine (wouldn't that be a good band name?) with Manuka Raisins and Preserved Lemon.
I do not have any Manuka Raisins but I have some regular ones and I also have preserved Meyer lemons that Jessie and Vergil made last year and gave us for Christmas.

I wonder what I'll be eating for supper next Friday night?
Here is what the tentative itinerary says we'll be doing that specific night.


Friday June 24:
Morning: free
Afternoon: guided tour to the magnificent Cabaños Fort + sunset cocktail at the famed Hotel Nacional
Evening: dinner at private restaurant
F.A.C. with our musicians or any of the exciting clubs in Havana (optional)

I can't think about that right now or I'll pass out. No I won't. I've never passed out in my life.
I don't want to start now.

Good God, y'all! as James Brown might say were he still alive.
I'm glad I have a tiny life because I sure couldn't handle a big one.