Who Cares What We Eat For Breakfast? 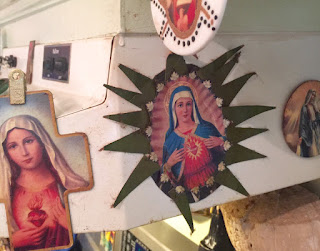 My closest-to-me-in-age brother says
NO IT DID NOT HAPPEN, NEVER, SHE WAS HAPPY AND SHE WAS A HAPPY SOUL!
He said, he says, he screams these words at me.
Not any more. We have parted and he lives as far away from me as he can
Which he has done for all the years of his adult life

Here's the thing of which I am sure
Mother was so angry at all which had befallen her
And she had every reason to be.
God knows she did

It's just that a child whose mother is angry
(so, so angry)
Believes
(knows)
in her heart that the anger is hers, earned in some mysterious way.

This morning I poached an egg, still warm from the chicken.
I watched it in the water.
It looked exactly like a jellyfish at first
It's translucent edges around that golden eye gracefully ruffling
given life in the bubbles
of the small sea in the pan
and then it turned the ruffling edges and jellyfish skin
white

I toasted two tiny rounds of sourdough bread and buttered them
And placed the perfect egg atop one of them
Cut it all up into bites, fork and knife flashing
I ate it all slowly and it was good
(So good), then
set the bowl in the sink with water to soak

Mother
I am sorry you were so angry
(I am)
but I wish I had not thought your anger was mine
to bear.

Simmering, simmering, brought to a boil
The sacrifice of the egg
Still warm from the mother's body
Consumed
(I ate it up)
But to no good purpose
(not one good purpose)
at all.