Someone Needs A Rubber Duckie

Okay, okay, okay, okay, I'm fine, I really am.
It's been one of those days where I just did the tiny things like scrub toilets and sweep floors and hang laundry and repot a plant and eat crappy food.

I did get to see Owen and Gibson and Magnolia for a few minutes. When I got there, Owen and Gibson were trying to fix their road. Owen had a shovel for said purpose. Their road is horrible. The Waste Management company throws tantrums and refuses to pick up their trash. It's a feud by now. Owen, however, decided that no, he could not fix the road but his mother thanked him for trying. It is a rather large job for one boy and a shovel, even with Gibson's help.
Magnolia joyfully smiled for me and rested her head against mine for a blissful moment or two and slobbered all over me and spit up on me and let me kiss her over and over again.

In order to try and negate some of the crappy food I ate today, I am going to make one of my favorite recipes tonight, Creamy Cashew Butternut Squash soup, although I use acorn squash and sweet potatoes. Let's bring it on down south, y'all. Mr. Moon does not especially like it but he'll eat it because he's sweet like that. I bought new turmeric today and the lady checking me out, whose name was Geeta, asked me what I was going to cook and we got into quite a discussion about turmeric and how she uses it and its health-giving properties and also cumin, etc.

So I suppose I better get in the kitchen and start cooking onions and cashews and ginger and squash and sweet potatoes. I hate peeling hard squashes. Do you? Cutting them up is no picnic either. 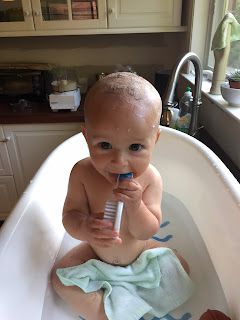 All of a sudden he's sitting up like a boss and he got a new bathtub. She sent me an even cuter picture before that one but it showed his precious little pee-pee and you know I can't disrespect my grands by showing more than an occasional little pink butt so I requested one that covers the preciousness up.
Is there anything in this world cuter than a naked baby in the bathtub?
If there is, I surely would like to know about it but I'm not sure I could handle it.