It's Too Beautiful A Day To Feel This Sad 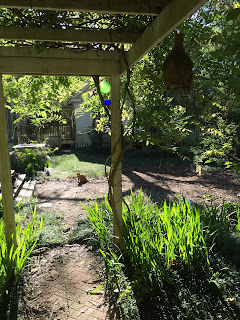 I woke up to another perfect day, but haunted by dreams and it would seem that I've taken to chewing my tongue at night, or at least biting down on it. But up I got and knew that today was the day to take the little chickens out to the new outside shelter and that was cheering.
But when I went to let the big chickens out, I found Miss Lucille on the ground, flat and breathing hard. I thought perhaps Mick had just mated with her because sometimes after sex, the hen does just lay there, still, for a moment before she stands up again and shakes it all off.
But no. This was different.
And she didn't move and I noticed that her comb was turning black and I picked her up and could not find a wound on her but it was so obvious that she was in the process of dying and I had no idea why and didn't know what to do. And so I did nothing but stroked her soft feathers and Nicey stayed in the hen house with us and watched her 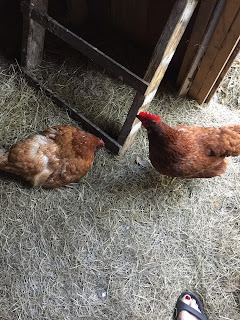 and then looked at me as if I was supposed to do something and sang a little song and now she's on the nest by her dying friend. I keep going out to check on Lucille, to stroke her feathers, tell her what a fine hen she's been and I am so sad.
I have no idea what is wrong with her. Did she eat something she shouldn't have? Did a snake bite her? I don't know. I don't know. But she doesn't react to my touch at all.

Damn. These chickens have made such a nest in my heart.

So I'm going about my day. What else to do? Supposed to meet kids and friends in town for lunch and I'm washing sheets and I did put the baby chicks out. 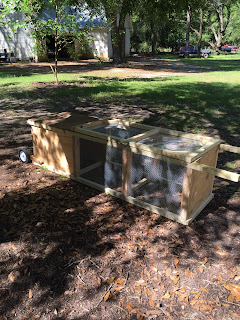 Here's the new daytime coop for them that Mr. Moon built. You can move those wheels at the end down and lock them into place and use those leg-looking things on the other end to wheel-barrow the entire thing to another spot. It's tight and safe, no gaps for things to get in or chicks to get out. There is a shaded area should the sun get too bright or they want to feel protected, and plenty of room for them to run around and scratch in the dirt. I can hear them peeping now. 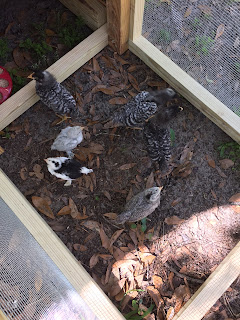 And so life ends and so life goes on and it's only a chicken. Only a chicken and there are probably billions of chickens on this earth but there are only sixteen in this yard, each one named and known and yesterday Lucille was out and about and running with the flock.

I just went and checked on her again and she is still breathing but that is all. Nicey is off the nest but keeping watch and that is the saddest of all. Don't tell me that chickens are brainless creatures. Even Mick has gone in to see her. In his rooster talk he told her to get up but she did not. He walked around her for awhile, and then went back to his flock. I have no idea what these birds think but I know that they do think and they do know when something is wrong.

Sometimes we can't think about it too much. We just have to keep watch.
And so we are, each in the way that we can.