Yesterday was just a shit day and I didn't get much done but Jessie did come by with Prince August and I had a lovely time holding him on the porch. He had just woken up from a nap and was completely content to sit on my lap and try to get my necklace off of me and into his mouth and to accept my kisses and snorgles and to look around at all the hanging stuff on my porch- the mermaid, the glass disks, the mirror, the funky junk I surround myself with. His big eyes took everything in and then I handed him back to his mother so that I could look at him. 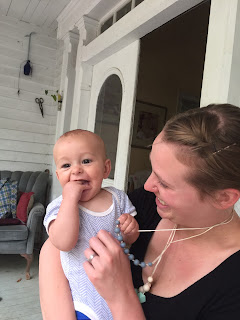 I have the baby chicks now where I can see them from my seat on the porch and they amuse me no end. The larger chicks, the Barred Plymouth Rocks, have begun a rather distressing activity which involves flying towards each other and bumping into each others' chests with great fluttering of wings and much peeping.
I fear this may mean they are all roosters but we shall see.
This is not a great picture but it's what they look like today. 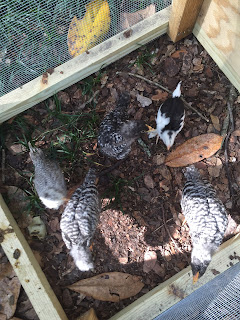 They love being outside and they love the greens I chop up for them and deliver at regular intervals. The cats and the mature chickens still seem to be ignoring them.

Last night I made a potato and kale and collard gratin. I'd never made a gratin before and the recipe called for me to massage the greens "aggressively" with olive oil and salt and pepper and garlic and so I did. I thought the dish came out lovely. Not sure my husband agreed so much. When one has a garden full of greens, however, one must step outside of one's comfort zone occasionally to try new things.

And so it went and here it is Friday and I've already been on the phone with my health care provider because I am literally OUT of my medications and despite being contacted at the beginning of the week, they had not responded even though I went to see them about this a few weeks ago and then had that horrible anxiety attack and dear god, I have to find another provider.

Prince is still dead. Donald Trump is still running for president, bluebirds are flitting about my yard, Jack and Maurice seem to have become friends or at least hang out together for much of the day, I have to go to town, tomorrow we are going to spend the night in Apalachicola because Lon and Lis are playing there and it is almost Lis's birthday, the baby chicks are trying to figure out how to escape from their coop, the mosquitoes here are as fierce and large as I've ever seen them, and it might rain today which would be good for the garden.

Life is such a mixed blessing of it all, isn't it?