Pictures From A Good Day 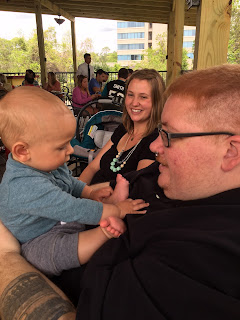 Another lunch in town, another opportunity to pass around the babies! Oh golly, it was fun. Hank's dear friend, and ours too, joined us today. Her name is Joanna and she is, and I'm not going to lie here- about the sweetest, dearest woman I've ever met.
One of the best things about being the mother of awesome people is that those awesome people bring other awesome people into your life. Here's a picture of the awesomeness which is Joanna hugging the awesomeness which is Hank. 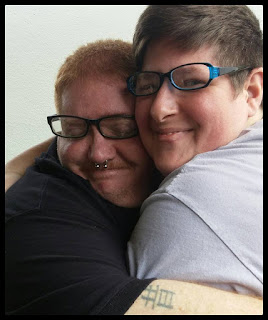 And here's a picture of her holding August who was the very merriest boy today. 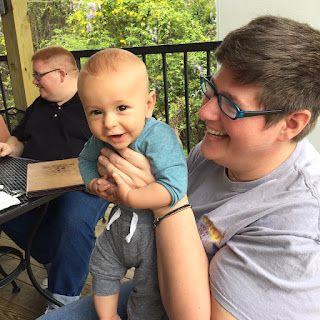 Oh gosh. I have so many pictures. 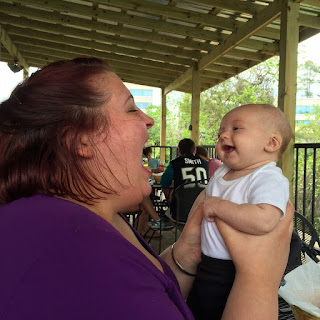 Maggie is three months old today and is laughing now! Oh, how I love her! 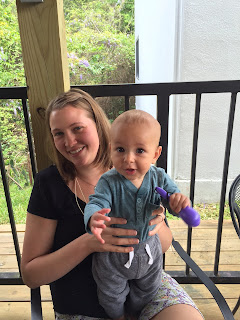 August and his mama. 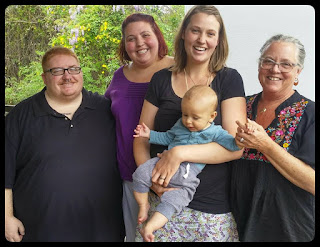 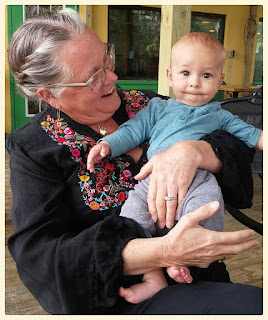 Jessie calls this August's "turtle face." It's one of his favorite expressions. 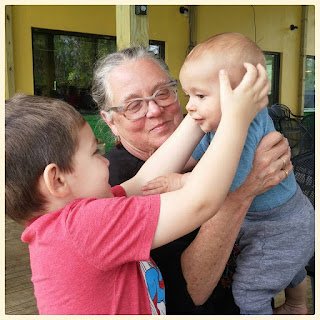 Gibson just really wants to squish August with his love. 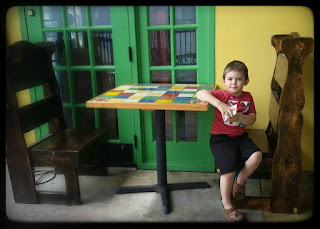 Speaking of Gibson, isn't that a beautiful picture? Thank you, Joanna! He is such a man cub, that boy. He kept hugging me today, over and over. One time, when he was hugging me and I was hugging him back he said, "That's enough," and it was but he gave me another one soon.

And so that was our lunch and the food was delicious and to top it all off, it was a beautiful day and this was blooming behind our table where we ate. 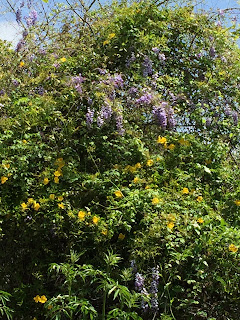 Wisteria and some yellow flower- a yellow wild rose? I don't know. We couldn't get close enough to tell but it was glorious.

After we all went our separate ways, Lily and I and Gibson and Maggie went to pick up my Owen at school and then I took them to their house and came on home where stuff like this is happening. 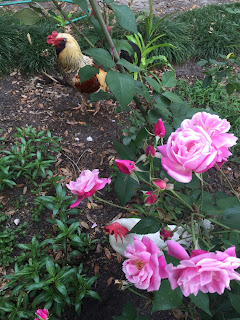 Roses and a rooster. Those roses are blooming themselves right to heaven! And they smell exactly like roses are supposed to smell.

I did a little palm trimming and that was about the most productive thing I did all day.

Since this appears to be picture day, here's two more. 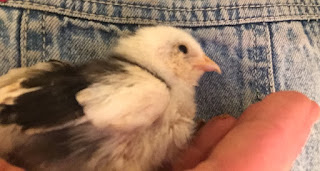 Tiny little Dearie who is looking good and 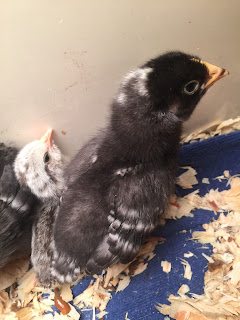 Diamond who is getting her/his tail-feathers. Can you see the fluff back there? Oh, probably not. But it's there. They are all getting true bird-like wings and it's so funny when they stretch them out because they are longer than their bodies. And amazingly, look exactly like wings!

So it's been a good day here although the world is full of crazy and of cruel. All I can say is to gather your loved ones and have sweet times together whenever you can. Smell the roses, of course, and the tea olive as well. Kiss the babies until they laugh, hug long and hug hard and say "I love you" as much as is appropriate and then just a little bit more. But don't squish anyone with your love. That would be wrong.