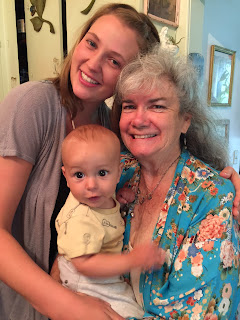 It's quiet here in Lloyd right now and I'm alone but two hours ago it was not quiet and I was certainly not alone. We had a little birthday brunch for Lis. I made a frittata-like thing with the leftover potato and greens gratin and eggs and cheese and made toast of homemade bread and cooked bacon and set out the apple butter I made from Vergil's mama's apples.
And then we ate prune cake which had already been cut into last night after our shrimp supper.

Okay. When I said it was quiet, I was sort of lying.
I can still hear the sad, sad, pinging "Happy Birthday" song that the Magical Candle I put on the cake last night is playing. That fucking candle. I am DONE with Magical Candles. This one sort of exploded and the petals fell off and it wouldn't really go around the way it's supposed to and I felt terrible. I mean- I was trying to introduce MAGIC into the situation and it was a damn disaster.
Glen put the candle outside last night and it was still playing this morning and Lon found it and tried to smash it to no avail and he put it in a trash can out by the shed and by god, that thing is still playing and I can still hear it.
Oh well. It was a fun night anyway.

And a fun morning as well. Lis got to hold the babies. Here she is with Miss Maggie, the dumpling child. 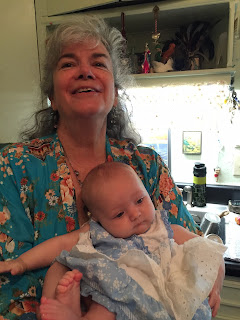 Owen couldn't be here as he has school but today was a field trip to Wakulla Springs so I'm sure he's cool with that. Gibson was here in force, as he always is. He asked me what we were going to eat and I said, "eggs with potatoes."
He got terrifically excited and told his mother that we were going to have EGGS AND TOMATOES but when it came time to actually eat, he declared the frittata to be "disgusting" all mixed up the way it was but he ate some bacon and toast and loved the prune cake. I put new regular candles on it this morning and we all sang Happy Birthday with our real voices and Gibson got to blow out one of the candles.

Lily and Jessie have gone home and taken their children with them and Lon and Lis have packed up and gone home to Gator Bone where Lis is taking two days to work in her garden which is a huge treat for her, and Lon has promised to be her garden slave.
"I'm gonna wear the man out," she said this morning. She was smiling when she said it. I don't think Lon is too afraid.

We went out to check on the baby chicks before everyone left and we picked them some mulberries to eat. They were not sure at all about those mulberries and eyed them with grave suspicion. 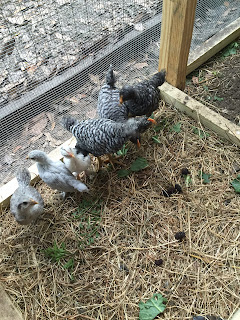 "THAT DIAMOND IS REALLY GROWING UP!" yelled Gibson and then, "WHICH ONE IS DIAMOND?"
It is getting hard to tell the two lighter colored barred Plymouth rocks apart.
In line there we have Blossom, Violet, Dearie, Diamond (I think), Mona Lisa (I think) and Sally.
Pay attention people. There will be a quiz later.

And so- another Lis birthday and it was a good one. I just feel so lucky to be able to spend birthdays with Lis. We discussed the possibility of going up to Asheville this year for mine as Jessie and Vergil and August are going to spend a few months up there this summer and I doubt I'll be able to last the entire time without seeing August.

I think I might iron today which is such a good excuse to watch TV.
Or go to bed. Either one.
One more picture. 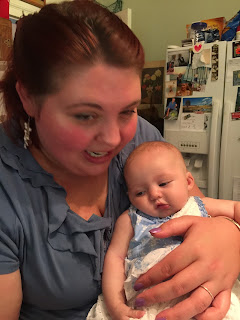 Look at that little mouth. Don't worry. I kissed her for all of us.

Happy birthday, my darling Lis. Thank you and Lon for sharing your shining, beautiful presence with us again.