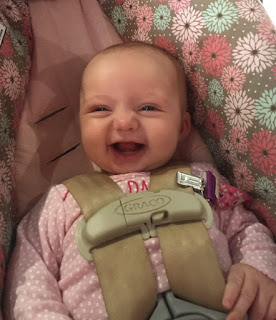 Maggie's smiles. They are as big and full and brilliant and gorgeous and joyful as any smile on this earth which has ever been smiled. She is beatific, imparting, as the dictionary says, "holy bliss."
You cannot look at that face and not smile back. And she laughs, too. Those funny deep baby laughs that make you just want to keep on doing whatever it is you are doing to make her laugh for as long as she'll keep responding.

We met up for lunch and our friend Liz Sparks came too and she held both babies, loving on each of them, sniffing heads and making goo-goo eyes. August stood on Uncle Hank's belly and stretched up tall, with Hank holding him, waving and flapping his arms like a baby eagle, ready to take flight. It was hysterical and beautiful and you'd think by now that just thinking about my grandchildren wouldn't make me tear up but it does.
It does.

Well. Yes. Lucille died sometime between noon and two-thirty which was when I got home. I came in and changed my clothes and got a shovel and dug a little grave under the giant oak where the honeybees hive and carefully laid her in and covered her up.
Still no idea why she died. She was young, a young hen.
So it goes. So it goes. I am glad she was not suffering for long and honestly, I do not think she was conscious when I found her this morning but far into the process, moving along that path.

The baby chicks loved being outside. Or at least it seemed as if they did. I gave them garden greens and they tore at them with their dinosaur beaks and they scratched in the dirt with their dinosaur feet. I thought the other chickens would pay them more attention than they did but I only saw Lisa Marie peering at them through the screen and I saw neither cat giving them even a glance but you know cats- they are clever and sneaky and if the did have interest in them, they would pretend otherwise. And the babies can run into the boxed in part of the coop if they feel afraid where the cats can't see them at all and it would take a far bigger cat than either Maurice of Jack to breech that coop. Like a lynx. They're back in their bathtub home now for the night and tomorrow I shall take them out again.

Speaking of cats, I just saw Maurice staring intently at the bluebird box where I am almost sure there are babies. I whistled at her and yelled, "Maurice, NO!" and she broke her stalking stance and now she's back in the house and I gave both her and Jack some Temptations for being such good cats and not killing birds and because I'm a fool.

I really do not consider myself to be an extreme animal lover on any level and yet, the animals which I do love, I simply love. Not like I love my friends or my husband or my children or my grandchildren and perhaps it isn't even love at all but simply a respect and appreciation for the other creatures who share my life and make it so much more interesting. And that would include the bluebirds.

I'm going to shut up now because I'm only rambling.

I'm tired. Let us all sleep well tonight and perhaps, if we are as lucky as lucky can be, we will dream of smiling babies.