It's The Little Things. And The Big Ones 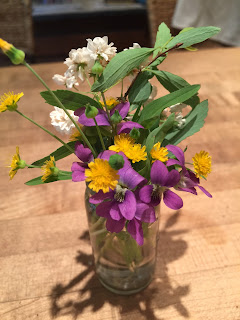 That's one of my tiny bouquets right there, made of wildflowers, the yellow ones probably labeled as a weed. I do not know their name but they are beautiful and if you don't look closely when you are walking about your yard which supposedly needs mowing you won't ever even see them.
Fairy flowers.

It has been a good day. I actually got out of bed early enough this morning to go to one of Owen's T-Ball games. I am NOT a good grandmother when it comes to these sorts of things but honestly, T-Ball is my favorite level of children's organized sports. There is no score-keeping, each child is praised for any effort and half of the coaches' job is to remind the children to pay attention and not play in the sand in the outfield. Or in-field. Or whatever those places are.
And here is what I mostly did and which made getting up at such an ungodly hour on a Saturday morning so worthwhile: 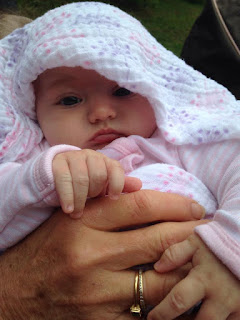 I got to hold my Magnolia who, despite her solemn face in that picture, smiled a lot. We covered her in her little blanket because it was chilly and we joked that she looked like a nun. A baby nun. Little Sister Magnolia.
After the game I got all three of the children to pose. 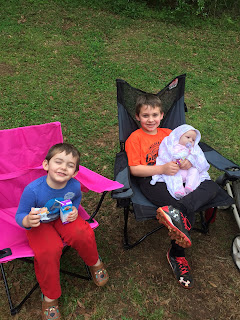 I continue to be stunned at what good and loving big brothers Gibson and Owen are. Gibson, at four, can give his sister a bottle in the car as we drive from one place to another. He actually asks to sit next to her. And Owen- well, he's a pro now. Oh! How I always wanted a big brother.
In some ways, my grandchildren are fulfilling all of my own dreams in their own ways.
I can't tell you how that feels.

Boppy helped coach today and if you've never seen a six-foot, eight-inch tall man give a five-year old a high five on the baseball field, well...let me just say that's a beautiful thing. Jason is the coach of the team again this year and the assistant coach was a man with piercings and a beard and a car that bore an equality sticker and as well as one for Bernie. Made my heart happy, all the way around.

Hank has organized a family and community picnic at the Wacissa River tomorrow and although it's going to still be too cool for me to go swimming, I am going. Owen asked me if I would bring turkey roll-ups from the Costco because last summer when we all went to the Wacissa for swimming and lunch, that's what I brought. And so of course I went to Costco and bought two types of turkey wraps/roll-ups/whatever they are. It's going to be fun.

Mr. Moon is out in the garage making what I am calling a Juvenile Poultry Protected Outdoor Training Facility. I jest. And yet.
I thought he was just going to build a little box thing like the one he made before which we used for previous baby chicks. I went out and checked on his progress after I woke up from a nap and it's...well, let me just say that Mr. Moon does nothing by half-measures.
"Darlin'!" I said to him. "What in hell is this?"
"A tractor coop," he said. We can use it again if we raise more chicks and the kids can use it if they get chickens."

I sure am glad that I was wearing that angora sweater I borrowed from Sue-Sue that kept falling off one shoulder the night he set his sights on me.

We aren't as young as we were then but in a lot of ways, it's sweeter now than ever.

A fairy tale if there ever was one, bouquets to prove it.