Deep Greens And Blues For The Colors I Choose 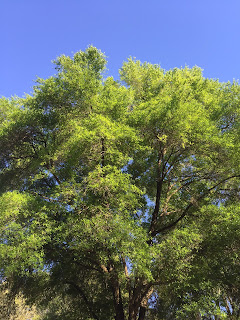 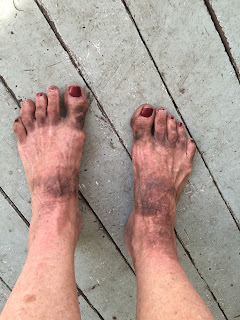 That's what my feet looked like when I finished up in the garden. It's been a gardening day. I finished up the mulching and got my sweet potatoes planted and my cucumbers, my squashes and my zipper cream peas. Oh y'all, I can't wait to eat some more of those luscious beans. Remember last year when I was shelling peas and cooking them as fast as we could pick them?
I'll be planting another row of a different bean when I pull the rest of the greens out because there's just nothing better. Field peas, black-eyed peas, purple-hull peas, crowder peas...
That is what I like about the south.

Here's something I didn't like today and maybe I was just too sensitive or...something.
I was on my walk and passed Ms. Shelly's house. I've spoken about her before. She grew up as one of thirteen children and spent her childhood taking care of babies and working in the fields picking peanuts and doing every sort of hard job there is and now she's retired and lives in her own house and never had children (her choice) and her joy is in keeping that house and her yard as tidy as a clean white handkerchief. Since she was out raking, I said hello and stopped to chat a moment and we were talking about raking (she can't abide leaves in her yard, cannot abide it) and gardening and pollen and sinus infections and kale and all sorts of things when a truck pulled up next door and two white guys got out of it. I'm not sure what they were doing there. One was younger than the other, more boy still than man, but they had some business with the owner of that house whose yard is also spotless and while they were waiting on that man to get them something from the house (perhaps a donation for a clothing drive- I think I saw him pass over some boots and maybe some clothes) the older man looked over at us, having our little chat, and he said, "I sure wish I had y'all's job!"
And out of my mouth flew the words, "You have no idea what our jobs are. Why would you say that?"
And Miss Shelly said, "I'll be glad to trade you any time."
I mean, here we were, two older ladies, one with a rake in her hand, the other with a walking stick, having our own little talk and he felt like he just needed to say something. I have no idea why that pissed me off so much but it just did.
He was taken aback and said, "Well, I just mean, you're both outside on such a beautiful day!" and I wanted to say, "Well, so are you, motherfucker," but I didn't. We went on with our talking, ignoring him and then he said to me, "I'll bet you're a teacher, aren't you?"
"No, "I said coldly. "I am not."
And we went back to ignoring him and he finally shut up.

Maybe he was just filled with the joy of this beautiful day and maybe he was just trying to be friendly and maybe his remark got to me in the place where I feel inferior because I don't work at a real job in the real world. And if I were a more Zen-like person I would have kept my mouth shut and honestly, it didn't really bother me that much, just a little bit like when I'm walking in the woods and a horsefly starts chasing me and no matter how much I flap and flutter my arms, it just wants to land and bite me but if I keep walking, it won't.

So we finished talking and she told me that I could come and rake at her house any time, she had an extra rake and I told her that she could come and rake in my yard any time and we wished each other a good day and I came on home and surely had one, getting that garden in order.

It's the perfect garden right now, hardly a weed to be seen, the beans and peas coming up, the tomatoes planted, the kale and collards still fit to eat, the beets and carrots ripe for the pulling, the potatoes, both red and blue, looking damn good. 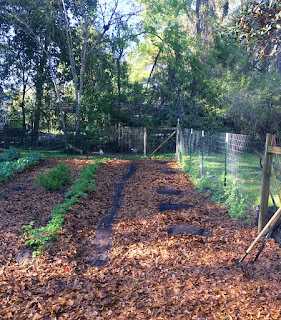 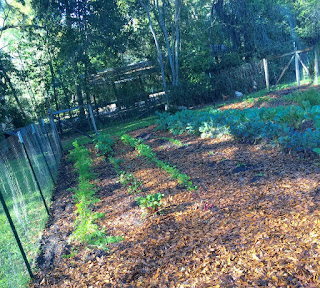 The carrots, the blue potatoes, the beets and cilantro, the new mustards and arugula.

I have clean, line-dried sheets on the bed, a book I'm reading with my eyes, about five New Yorkers I'm in the middle of, a brand new Vanity Fair that I pulled out of my mailbox today and a book I'm listening to which seems pretty tremendous although it's going to be hard to hear the truths it speaks of. Someone Knows My Name by Lawrence Hill. Also I have leftover tuna casserole from last night which has all of the vegetables in it. Plus noodles.

Have I mentioned that I have hot and cold running water? In my house?

Dedicated to Lynn and Brian.