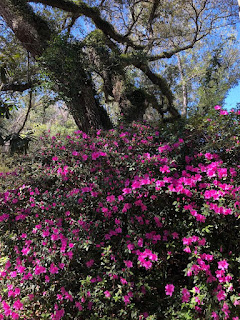 Well, I must be doing better because I've been pissy all day long and actually, I don't feel better. When I woke up I had a headache and my ears were stopped up so I guess that while I was sleeping the crud made its inevitable little journey up to my sinuses and all those connecting chambers and caves and underground tunnels that we have in our heads.
And I'm still coughing up crap and from what I've heard this could go on for weeks so I need to SNAP OUT OF IT and GET ON WITH IT and stop being A LITTLE WUSSY GIRL and so forth and so on.
Yeah, whatever.
The world seems to be going along just fine without me. Maybe that's what I'm pissy about. As Anne Lamott once said, "I am the piece of shit the world revolves around," and I related to that immediately. I swing from feeling as if the world will far apart without me, to feeling as if my disappearance would make no difference whatsoever and so far, the evidence seems to point to "no difference whatsoever."
Sigh.
I'm an insane person at the best of times and these are not the best of times although, to be honest, it's not been nearly as bad as I'm insinuating.
So one thing I did today that was fun was to plant a few things I've rooted in pots. I generally have bottles and jars and vases all over the house with things in them rooting. This brings me more pleasure than you can imagine. I have one plant that I've had since at least 1983 that I've taken so many cuttings off of and made so many new plants out of that I've taken to throwing the perfectly good trimmings on the burn pile. I think the plant is some sort of philodendron. But I did put some of one of the plants in an old blue Bombay Gin bottle and rooted that and today it went into a pot. I think I have at least five pots of it now. I'd also rooted three of my beloved giant begonia leaves and stuck them in a different pot. I started the mother plant of that from a few cuttings of leaves that I stole, with the permission of an employee, from a local nursery and now I believe I have, uh, let me count...just three pots of those. I have two different leaves rooting in another room though. The leaves are so gorgeous that just the sight of them in a vessel of water makes me happy. 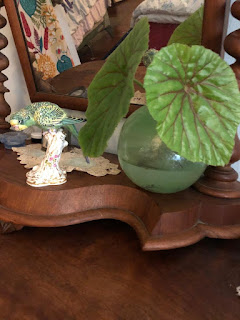 The other day on Facebook, Lily posted this meme and tagged me and Jessie. 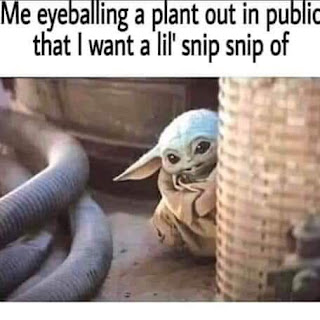 It's so true. And yet, I rarely do it. I go through a whole philosophical discussion in my head about the morality of taking the merest slip of a snip from someone else's plant. There can be a pot of succulents with babies spilling over and falling on the ground and I'll still hesitate. Okay, if it's on the ground I'll take it. Otherwise...
But I have done it. I will admit that.
And my very favorite plants, hands down, are the ones that I've dug up in the woods or started from seeds of fallen fruit or cuttings I've taken. And I swear- no plant was ever harmed in the process.

I have one more thing I'd like to discuss a little bit and that's the Coronavirus. Are we all going to die and/or is the country going to shut down and/or are we all being ridiculous and/or WTF?
I'm rather confused. On the one hand, it's just a flu. So was the Spanish Flu that killed over fifty million people but that was a different time and a different flu. And I get that this flu is more deadly than the "regular" flu but it's still not like the Black Death. The thing that reassures me most is that it doesn't seem to affect children very much.
People are stockpiling things like we're facing a nuclear holocaust or a hurricane. Is Publix going to be closed? Costco? Schools? Highways?
I just don't get it. I do get the fact that Trump has appointed Mike Pray-The-Gay-Away Pence to be in charge of things in the US concerning the flu. Is he the Flu Czar? This is troubling as is Trump's comment that "It's going to disappear. One day it's like a miracle, it will disappear."
Will that be before or after everyone dies?

I better shut up now and go make supper. I've already made the soup which doesn't excite me very much but it's full of healthful goodness. And as I told Mr. Moon, it may not be that good but there's plenty of it!