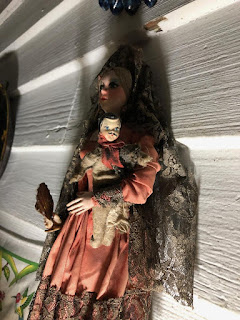 A few days ago I asked my husband why he hasn't filled the bird feeder lately.
"The chickens- remember?" he asked.
"Oh, yeah." I said.
They had started out just pecking up the seeds that fell to the ground but eventually they'd figured out how to fly up to the platform and get the seed at its source, gobbling up expensive wild bird feed as fast as we could refill the feeder.
Sigh.
But when he went to Lowe's the other day he bought some bird seed and this morning he filled up the feeder and before he'd even gotten it rehung, Miss Darla was running toward him.
She had remembered what I had forgotten.
And within seconds, the rest of the flock came running. 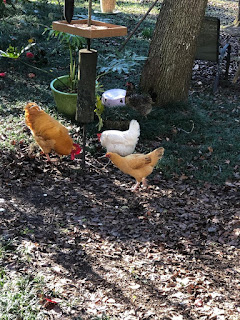 That's not the whole flock but part of it.
"Wonder how long it'll take one to fly up to the platform?" my husband asked.
Turned out, about five minutes. 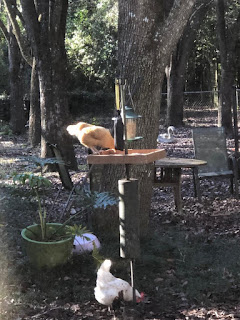 Miss Sissy was first. And then Liberace joined her. 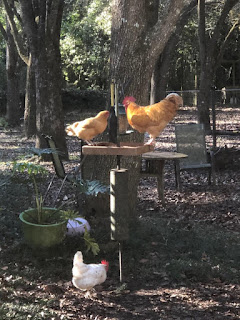 Mr. Moon was not to be trifled with. He got out another pole which he had stashed away somewhere and fixed the whole thing so it's about two feet higher. I did see Darla try to flap up there but she misjudged the height and didn't make it and squawked in frustration. And so far, none of the rest of gotten up there either. I know they can. I mean, Sissy and Susie sleep in a damn TREE! But for now, all is well. I even saw two lady cardinals dining, unmolested by giant poultry.

It's been a sweet, gentle day. I took everything slow and easy. I went across the street and removed the catheter from the Lidocaine pump that was in my neighbor's shoulder. And yes, deja vu all over again in that I did the same for her husband's Lidocaine pump two weeks ago. So I was a pro at it today. Just as I completely removed it, my neighbor asked, "Are you taking it out now?"
It was hardly a job that required the four years of nursing school education I had but I was glad to do it. I frequently dream that I had never finished nursing school and I never really took the time to wonder why because I most certainly did, until today. In a way, nursing education is in three (at least) parts. One is the classroom and clinical training you receive, one is taking and passing the state nursing exams and the third is actually working as a nurse because that's when you truly become a nurse in the sense that your education only provides you with so much and then it's time to actually learn as you do.
And I never really did the third part. The only nursing job I ever had was at a birth center and I think that I've probably always been a bit ashamed of that. Not of working at birth center. I loved being a birth attendant and helping the midwives and the mothers and greeting the new babies. I did that for years but it wasn't like working in a hospital. At all.
And honestly, working in a hospital probably would have killed me. Have I told you about my all-things-medically-related neurosis?
Haha!
So in a way, those dreams make sense. They are always tied to me needing desperately to get out of my mother's house and not having a way to make a living. I generally have children in these dreams and need to support them too. To add to the drama my stepfather is still living in the house with my mother and I am constantly yelling at him to GET AWAY!
Well.

I cleaned my back porch today. I didn't do a "deep clean." That would require a pressure washer and I'm not kidding you. But I did clean the dirt and dust off some tchotchkes 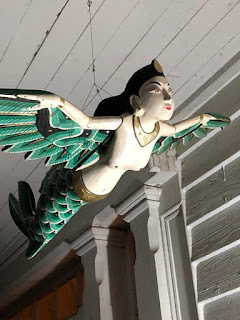 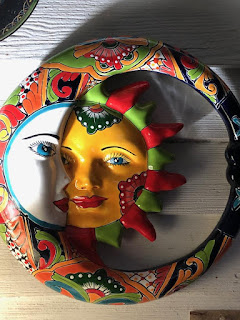 and wash some windows and scrape a little dried chicken poop off the floor and take out about twelve generations of spider webs and I also swept the corners and tidied up and put some things in my car to take to the dump including a perfectly good chair that needs re-caning which we will NEVER get around to, ever, in this lifetime.
So, not a deep clean but it's somewhat less disgusting.
You just don't realize how surrounded you are by filth until you start a project like this.
Okay. Maybe that's just me.

Anyway, that took all afternoon long although I will admit that there was a nap involved in the middle of it all. Somehow I also managed to wash all of my cashmere and hang it on the line which was a most sensuous and enjoyable experience. Cashmere is so amazing. Not only is it the warmest, softest fiber in the world, it also dries surprisingly quickly.

And now it's getting dark and I've seen a male cardinal at the feeder and Miss Darla is missing from the roost but I'm not too worried. I just told Mr. Moon this morning that it's about time for her to go broody again. She may well be sitting on some eggs somewhere. At least that's what I hope.

Time, as always, to make our supper. And I have to say that it's been a fine day, not just for a Sunday but for any day. May this upcoming week be as sweet.