Life And How It Goes 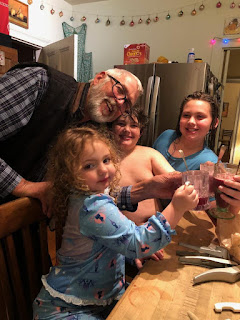 Well, the sleep-over went pretty darn well.
While I was cooking supper the boys played Wii with Boppy, and Maggie entertained herself with a few projects. One was washing Buddha who sits on my porch and was indeed, quite dusty. We drew a sink full of water and she soaped him up and scrubbed him good and then she dried him off with a nice clean towel. 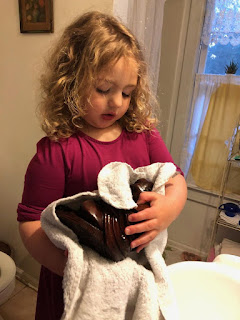 We left him to finish drying on the towel on the bathroom hamper and she insisted that he needed a cover and so we got him another towel and he slept there peacefully, all night.

She also played with old Zippy and the little sock monkey that her mama made for me many years ago. 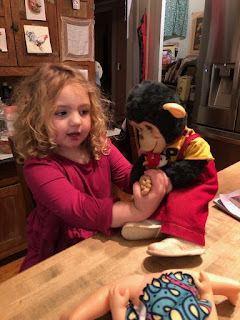 There was an entire scenario going on there.

Our supper was very good and then baths and showers were taken and purple cows were consumed. Magnolia, especially, loved hers. She kept saying, "This is the very best ice cream ever!" Then we read books. Well, Gibson and I read books. Owen fell asleep and Magnolia said she wanted to read her own books in her bed which was made up on the floor. There was practically a fight over who got to sleep on that little fold-out and Maggie won. So she read her books down there and Gibson and I shared the reading of The Little Red Hen Makes A Pizza which I am still not tired of after all these years and also, Banjo Granny which is a very sweet book and has a little boy by the name of Owen in it. Which reminds me that I read a book to August the other day that charmed me to my very soul. 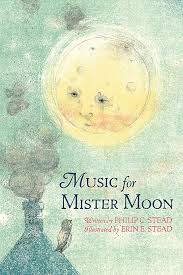 Not only is Mr. Moon in the title, but the little girl in it says, "Call me Hank."
And it's just as sweet a book as you'll ever want to read.

Anyway, the kids settled down quite easily last night. Maggie needed water and a snack and another kiss from Boppy but that was all taken care of and I tucked her in and yes, left the little light on for her and by the time I went to take my shower about twenty minutes later, she was in bed with "her boys," right in the middle, fast asleep.
So no one slept in the bed on the floor.

Mr. Moon got up early, early to go fishing this morning and blessedly, the children slept in until eight at which time they all presented themselves in my bedroom door. We had a few cuddles and then it was TIME FOR PANCAKES, of course. While I was making breakfast, Owen helped Maggie put on her shoes and her jacket and took her outside to let the chickens out and feed them their scratch. I was so impressed and proud of him! Finally, great quantities of sweet potato pancakes were consumed as well as some bacon and also, a few scrambled eggs. After breakfast there was a little more playing and Maggie put on some of the make-up she'd brought. 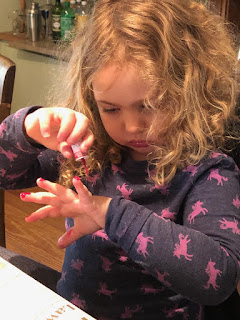 This is actually nail polish for children but as far as I could tell, it's just like regular nail polish. I honestly thought that this was a very bad idea but she insisted that she would be careful ("It's all right, I be careful, Mer") and she was. I offered to help her over and over but she insisted that she could do it herself. Which she sort of could. And I just stood by and when she was done and not happy with the results and wanted the polish off, I found some remover and took it off for her and we moved on to glitter lip gloss.

Before too long, Mama Lily came to get them and it was clean-up time and get-dressed time. After they left I did some tidying up myself and it was such a gorgeous day that I did laundry, mostly just for the pleasure of hanging it on the line. It's silly how much I enjoy that. There's something about pinning the sheets and napkins and clothes and towels so neatly and watching the breeze catch and play with them in the brilliant sunshine. I swear, when I am on my deathbed I am going to remember hanging laundry on the line as some of the happiest moments of my life.
I walked to the post office. I sewed up a pocket lining in a vest of Mr. Moon's and stitched a stuffed Teddy bear's neck where it had separated from the body. As I mended I watched a bit more of the Babies docuseries. I had been thinking about that brain-change thing since I'd seen it and I'm still pondering it. I wonder if the brains of other animals do the same thing. I imagine they do but who knows? Probably hard to do MRI's on birds and cats and lizards but maybe not.
Today I watched researchers as they determined that babies are set up from birth for social interactions. I remember when I was in nursing school and in the child development part of our education they were still teaching Piaget's theory of Tabula Rasa in newborns. I'd had two babies by then myself and absolutely disagreed with the theory, described thusly:

As far as I know they may still be teaching Piaget but more and more research seems to be showing that babies come from the womb with so much more than a blank slate. Which every mother in the world already knows. And has known.
Another thing I learned is that the composition AND supply of a mother's breast milk varies according to whether she's given birth to a son or a daughter. This is not just true in humans but also in cows and in monkeys and one may assume in other mammals.
How amazing is that?

And so it's been a full day. A beautiful day. I don't think it froze last night. The azaleas seem fine. But the cool temperatures and low humidity are heavenly and I am soaking as much of this weather into my bones as I can.

I feel lucky. I feel grateful. I feel like I'm going to sleep very, very well tonight.
I hope you do too.