In Which Light Poked Its Way Into The Darkness 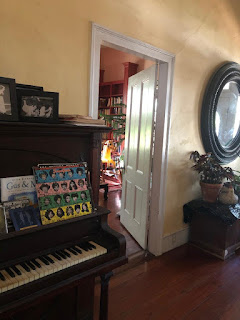 Today has been brighter than any day in quite awhile. After yesterday's storms the yard was littered with downed branches and twigs and limbs but the sky was a perfect cerulean blue. Liz of the West and I had tentatively planned to drive up to Metcalfe, Georgia to eat at Mary's Kitchen and we firmed up our plans and by noon I had my laundry on the line and was dressed in my finest overalls and we drove up the two-lane back road that's so small that there is no sign delineating when one has left Florida and moved on to Georgia. There are farms and farm houses, old cabins that one feels as if one could simply pull up to, get out of the car, open the front door and move into a completely different, sweet life. An old Methodist Community Church where the pastor is someone I used to be in plays with, his wife a woman I love and adore. As I drove I caught Liz up on what's been going on in my world and she caught me up on hers. We've known each other since before Jessie was born and indeed, she was with me when that precious little bebe came into the world, feisty yet content to be here.
She and I know where the bodies are, if you know what I mean.
We've been together through births, deaths, divorces, weddings, and profane poetry readings.
I love her.

I've spoken of Mary's Kitchen before. It's a tiny little cafe/restaurant across the road from a wood-processing plant on a railroad track. It's in a small old house and we usually eat on  the porch but it was just too chilly today to we sat at a table inside by a window, surrounded by other folks, local people, I would think.
Every day the menu changes and here was today's. 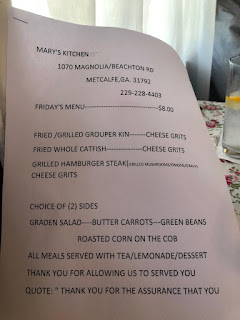 There's never a wrong thing to eat at Mary's. Never. Eight dollars (on Friday) for a main (which comes with a starch, aka delicious carb offering), two sides, bread of some sort, dessert, and tea or lemonade. I have no idea how they stay open.
Liz got grouper, I got fried catfish. 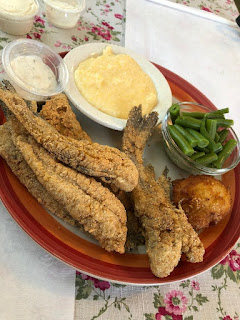 There was also a generous salad that I ordered that did not get into the photo. Catfish takes a long time to eat because, like mullet, you have to sort of filet it as you eat it. It's fried up, tiny bones and all and the sweet white meat is worth it. I couldn't even finish it all. We took our time and were the last people in the place and were brought two pieces of the most delicious streusel cake I've ever eaten. No crap dessert at Mary's. It's homemade. I had seen other people getting different desserts but I suppose by the time we had finished our lunch the cake was all that was left and I'm glad it was because I probably would not have ordered it, thus preventing me from having what will now be one of my best dessert memories of all time.

We paid up when we couldn't eat one more bite and drove down another back road, looking for a cemetery we'd found in the woods once but have never been able to find again. We didn't find it today, either, and mused that perhaps we had a shared hallucinatory experience that day although I'm almost certain I blogged about it. I should do a search. We didn't really drive too far because the road was somewhat of a mess- it's a dirt road and yesterday's weather had left downed branches all over it along with somewhat muddy conditions. But that was okay. We'll try another time.

Liz had to go meet up with some folks in town so after good-byes she got in her car and headed back to Tallahassee and I, in the spirit of lightness I was in, brought in the laundry and did a little ironing, a little crocheting. I'm enjoying this silly exercise of childlike needlework, making something useful with a crochet hook and cotton thread. Anything that keeps my hands busy while I watch TV makes me happy.

I got pictures from Jessie. Vergil's mama is in town and she and the boys are drawing track-hoes and playing violin. I know that August and Levon are thrilled to have her there. I'm glad the weather is good for her. It's going to be chilly tonight but warmer tomorrow and Sunday and sunny all the way through. I need to get out in my yard and pick up the detritus from the storm and perhaps try to do something about the Florida betony that's overtaking my yard.

It's been a good day and I've let the news unfold on its own although I see that Colonel Vindman has been relieved of his duties and escorted out of the White House under orders of our present dick-tator. Once again, just when I think that we've hit the lowest of the low, the floor drops down another fifty feet and it would appear that this particular cellar of evil and unthinkable actions knows no end to its depths and slimy demons.
Well, we know who sleeps among those snakes of slime and Colonel Vindman is not one of them and I hope that someday there is a statue of him in Washington labeled, A True American Hero.
I won't live to see it but perhaps my grandchildren will.

Friday night. The church is wailing, the temperature is dropping, the martini is cold, the bread is rising. Cake was eaten, my heart was lightened by time spent with a beloved friend.
There was laughter.