Live And Learn Or Live And Don't

Today started with me feeling so janky and jangled. Things that shouldn't even be the slightest bump in the road reared up before me as seemingly insurmountable as the Rocky Mountains appeared to the first settlers to cross the continent.
("Whoa!" they said. "I think maybe we'll just stay right here. Looks okay." This is how Denver came to be. At least that's my theory.)
But these things were not Rocky Mountains. They were things like having to drive Mr. Moon's car to town to sign some papers at two, needing to go to Publix, wanting to eat lunch with Lily and Maggie and how to fit that all in there, knowing that a repairman was going to be here sometime after three.
Theoretically.
Plus, Lon and Lis are coming on Thursday and I really have been making an effort to make things a little nicer for them. Today was the day I wanted to take on my bathroom, to tidy it all up and clean the sink and the shower, polish the wooden piece of furniture that the sink sits in, sweep and mop the floors and wash the rugs.
I know that those two dear people don't care at all if the rugs are clean but Lord, one should do one's best to at least get the mildew out of the shower before guests come and honestly, it's so nice to have it sparkling for me if for no one else.
So I just felt all kerfluffled as Lily described it but I made it to town and did my Publix shopping and then met Lily and Maggie for lunch. Afterwards we went to the Dollar Tree so that Lily could get kid valentines and I watched Maggie as she played in the toy aisle so that her mama could keep the valentines a surprise. For some reason there was a basket of loose toys right there on the floor and Maggie immediately began to play with those, using them to create her own story. 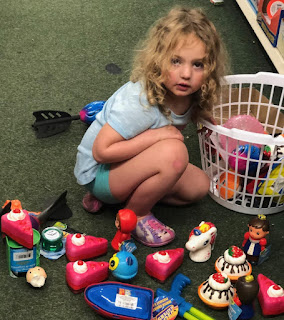 Sometimes the beauty of the child is more than I can bear.

I still had plenty of time after we were finished there so we stepped into Steinmart for me to look at rugs but they didn't have much in that department. Maggie found a chair though, and decided she needed a nap. 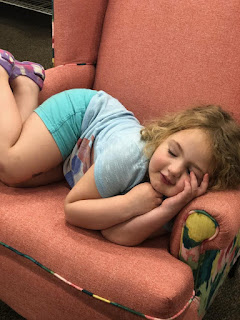 By the time we got her off the chair and out of the store, it was time for me to meet Mr. Moon. We got all of that done quickly and then I came home to wait for the repairman. While I was waiting I did attack my bathroom, mostly the shower, and although it's not exactly sparkling, you could perform surgery in there.

Finally, when I'd just given up hope that Mr. Fix Things was ever going to come, he showed up and I invited him in. You may or may not remember that we've been having trouble with our new(ish) freezer ever since we got it. The wheels have fallen off the rolling basket constantly. The thing never shut right causing it to defrost itself. And this was about the third time this particular repairman was here to do something about the problem. He's replaced the wheels, he's instructed me on how to close the freezer properly. Today he was going to replace the tracks that the wheels run on.
But.
He opened it up and started looking at it. He studied it from the front, he studied it from the side.
"I think I've figured this out," he said.
"Really? What is it?"
"The bottom basket is in backwards. See this slanted part? That's supposed to be in the back. And see those words that say 'front' on the back of it? Could be they're supposed to be on the front."
"Oh my god."
And yes, that was it.
We've had this refrigerator for what? Six months? More? I don't know. And no one has figured out that when they installed it, they put that part in backwards. I mean- it sort of worked. But I kept feeling like something was wrong. The design and function of the rest of the refrigerator was just so smooth and nice. Why would this part of it be so clumsy and funky?
And now it fits properly, the top basket rolls in its tracks nicely and easily, the front says "front," and it seals when you shut it without having to do anything special.
I can't tell you how many times it has been demonstrated to me by the repair guy and my husband how to properly close the freezer.
But hey- people get busy, they make mistakes. And now it's all figured out.

I am sure that somewhere there is a metaphor here for how I'm living my life. If there is, I don't exactly see it but I'm sure it has something to do with assuming that at the very least, my parts are installed properly while THEY MAY NOT BE.

I finished listening to Year of the Monkey and I hated for it to end. I think I'll listen to it again soon.

I tried on that flannel dress I made again today and it didn't suck nearly as much as I thought it did. I actually wore it to town. Maggie liked it because it has pockets. That's the main reason I like it too.
Perhaps pockets are the answer to life. If chimps had pockets they'd probably have invented something better than the iPhone by now.

By the way- Darla is fine. She was in fact, hiding somewhere in the coop the night I couldn't find her. Tonight she's sleeping in the same nest box as Liberace. And here's something I have learned about that rooster- he is a gentle lover compared to every other rooster I've had. His quick and non-violent approach to sex is enough to make me happy for all of my hens.