Childbirth As I've Known It 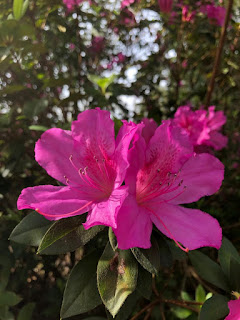 Last night I dreamed that I was dancing. It was clunky dancing but it was dancing and within the dance there were fragments of the way I used to feel when I danced and also, I was able to do a little low-level rising and hovering over the floor which is my dream-way of flying. There was a woman in the room and she said, "You are a good dancer."
"Thank-you," I said.
"But why do you fall so much?"
"Because I have not danced in a long, long time." 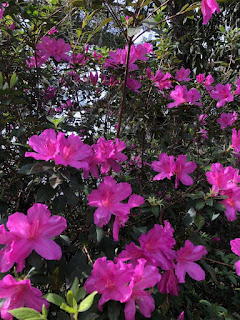 The azaleas, as I said yesterday, are blooming nicely and a few bees are humming about them. The spirea have acquired a few tiny leaves and even fewer miniscule beginnings of what look like bridal bouquets which is where this plant gets its name.
Bridal wreath spirea.
My native Buck-Eye has leafed out and soon it will be giving me its own blossom.

I did some weeding today in the yard. More crocosmia along with Florida betony. I will see betony roots when I close my eyes tonight. I have probably spent hundreds of hours of my life pulling this weed and I am not sure why. In the end, there will not be any less betony either in the world or in my yard and still, I pull it.

Jessie told me today about a podcast called The Longest Shortest Time which is mostly about childbirth and parenting, I think. She said that when she had first started listening to it, there was an interview with Ina May Gaskin and the woman who does the podcast had some difficult questions for her. For any of you who may not know, Ina May is the woman who spearheaded the homebirth-with-midwives movement back in the seventies and who has gone on to study and teach midwifery all over the world and to deliver many, many babies. She was a huge influence in my life. When I was pregnant with Hank I read her book Spiritual Midwifery which was a beautiful book and a groundbreaking book in those times of the completely patriarchal system of hospital childbirth. Just as things were changing in women's rights and civil rights and so many were questioning not only authority but the very systems that the authority had, well, authority over, women were rebelling against being restrained during childbirth (yes, really), separation from their partners during labor and delivery, the use of drugs routinely, the always-given episiotomy, the enemas, the shaving, the inability to move around during labor and perhaps most of all, the separation of mother and child immediately after birth and for long, long periods of time afterwards. At least that's the one I had the most problems with thinking about. Why should I be in one room after I had delivered a child who had been literally a part of me for nine months while the baby was in another in a plastic box under bright lights?
It seemed absolutely intrinsically and instinctively wrong.
Reading Ina May's book gave me an entirely different perspective- that childbirth did not have to be that way. And there were pictures to prove it! And statistics! And she had laid out a basic guideline on how to manage childbirth and delivery and with that and three friends, I decided to have a home birth.
I was a hippie.
I was twenty-one years old.
I was brave.
And I couldn't stand the OB who was doing my prenatal care. Of course I didn't tell him my plan to labor and birth at home. He would have kicked me out of his practice. Or had me arrested. Or something.
And to make a long, long story short, I did labor at home for twenty-eight hours at which point I said, "I need to go to the hospital," and my husband took me and within an hour of being there I had given birth to Hank, been told that if I tried to touch my "sterile" body or my baby I'd be restrained, and yes, separated from my child.
Sigh.
BUT, we left AMA after signing who knows how many documents and being lectured to sternly by both the head nursery nurse AND the OB and by that evening we were home and I was in bed with my baby, nursing him, and it was the most beautiful time of my life.
However, back to Ina May- she had made childbirth sound like something that, if one was spiritual enough and prepared enough and not fearful enough, would not be very painful. Women back then had been sold the idea that childbirth was SO painful that no modern woman could endure it without drugs. This was the party line for sure. But Ina May had said to not interpret what was going on in the body as pain, but as "An interesting sensation that requires all of your attention."
Well. I had tried. For twenty-eight hours I had tried. But what I felt was pain. The kind of pain (and I've said this before) that you think, "Please dip me in boiling oil in order to distract me from this pain."
No. Seriously.
And I was shocked and I was not prepared for that although I had taken a Lamaze class. Which did help.
So I ended up feeling a bit betrayed by Ina May. And also I felt somewhat ashamed of myself for bailing and going to the hospital. All right, truth- not somewhat ashamed. VERY ashamed. And somehow lacking in spirituality.
This was something that I struggled with for a long time. Of course I went on to have three more babies, all at home, all long and all painful labors but at least I knew what to expect. And I also got a nursing degree and went to work at a free-standing birth center assisting midwives.
So. Back to the podcast. This woman had also read Ina May's books and she had wanted a natural birth. Unmedicated and with no interventions and she had ended up with an epidural and I don't know what all but it was a horrible situation including an episiotomy that had been so poorly stitched that it had to be redone days later. And she felt as if she had failed according to Ina May's standards and she, too struggled with that. So in her interview, she talked to Ina May about this and Ina May, because she is an evolved and sensible person, listened and responded so positively that the woman felt much better. Ina May also said that she needed to update her book Ina May's Guide To Childbirth to reflect changes and the feedback that she'd just gotten and that she would appreciate more feedback from listeners and by golly, she came back on the podcast recently, five years after her first interview, and her book has been rewritten and is now published.
And I can't wait to read it.

Yes. I am sixty-five years old and I am most certainly never having another baby but pregnancy,  childbirth and early parenting have been and always will be passions for me. It is due, at least in part, to the home birth movement that changes in the ways hospitals deliver babies have slowly occurred although many of those changes are mostly cosmetic and we still have a horribly high Caesarian rate, even to the point that OB's are trying to educate themselves on ways to reduce it. But babies are not separated from their mothers until after skin-to-skin contact and breastfeeding have been accomplished if at all possible. And "rooming-in" is a real thing.
I got caught up in a discussion on Facebook yesterday about these subjects. A woman flat-out stated that the US doesn't train their midwives properly which means that home birth is not safe. I know that this is not true. That many states allow for and provide education and licensing for midwives to practice in homes. That there are master degree programs in midwifery. That women DO have safe options and that studies show that a low-risk mother who chooses a planned home birth with a qualified midwife are as safe as hospital births.
This woman refused to believe me and I finally realized that she just doesn't want to for whatever reason.

I remember when I was a young mother, attending home births myself, going to the capital when lawmakers were debating the legalization of midwifery and home births. The very doctor who had done my prenatal care with Hank and who had ended up delivering my baby was one of the people who was fighting the bill.
"What's next?" he thundered. "Are there going to be chicken sacrifices during these births?"

Eventually, the doctors lost a tiny bit of their hold on the birth industry and women and babies have been the better for that. Women can choose to have a home birth or a birth in a free-standing birth center or in a hospital with a midwife. Or, of course, with a doctor. The important thing is that we get to have a choice- a safe choice. We can make our decisions based not on fear or lack of options. We can educate ourselves and make our choices based on real facts and real studies with confidence.

One of the women who was with me in my labor with Hank went on to get her Master's degree as a  nurse midwife and then eventually to teach it. She delivered May before she got that degree. She was born to be a midwife. The last time I saw her, she had decided not to teach anymore but to go back to attending women in labor and to deliver their babies.
"I just felt like this is what I was supposed to be doing," she said.

The woman who delivered my last two babies, whom I saw last weekend, also went on to nursing school but never got certified as a midwife. Still, I trusted her and her skills and her knowledge so much that I had no doubt she could safely deliver my babies.
And she did.

Well. That's what I've been thinking about today as I've pulled weeds and gone about my chores. I've long since quit being ashamed that I chose to go to the hospital when Hank was born. In fact, I look back at that time and think that I was incredibly strong and brave. And plenty spiritual. And I am so grateful that I've had the opportunity to learn what my body is capable of. But mostly, I'm grateful for the fact that after my babies have been born, I could hold them and feed them in my own bed with my husband right beside me, my other children there too. To know the incredible and unreplicable experience of giving birth in the way I did. It is certainly not the only way. But it is a great way.
And my daughters have had this experience too.

Thank you, Ina May. Here's the Ted Talk she did about reducing fear in childbirth in US culture if you're interested.