The Mystery Of Chemicals 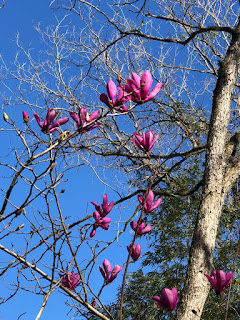 That is the only picture I took today. It's what we here in the south call a "Japanese Magnolia" and I did not plant this one. They do best when given lots of free sky and full sunshine and this one does not get either but it has grown since I've moved here. It is still here. It still offers its blooms to the universe.

It was so warm and springlike today. The sky was as clear as in that picture. And something about the light and the temperature and the soft warm air must have stirred something in me that would have best been left unstirred. I guess that's what happened. I don't really know but a profound sadness filled me even though I should have been thrilled at this weather, thawed out and rejuvenated.
It was not so.

I took a walk and No Man Lord was sitting at the table he's set up in his front yard with a glass candleholder and his Bible, a small wooden cross propped on it. When I walked past him on my way to the county line I swear I didn't see him underneath his neon-orange jacket and black hat. I saw the jacket and did not stare but I honestly thought he'd hung the jacket from the chair although I guess he was huddled underneath it all because on my way home, he roused up and appeared from the jacket and he waved and I waved back and said, "Good morning!" and went on.
Sometimes, when I am in sadness my eyes and brain don't seem to connect very well at all, or perhaps it's just that my brain doesn't process things the way it should. I know this is true. I can't make decisions, even the simplest ones like whether I should collect the trash from the bathrooms first or start the laundry. Everything seems huge even as nothing seems important at all.

I did gather up the trash and recycle things and found two old lamps I had stashed in a closet so long ago I'd forgotten about them completely and took all of that to the trash depot where I left the lamps and an old skillet that I haven't used in years, setting them where people leave things that others may be able to use. I went to the post office and did laundry and eventually, finally, I made it to the car and drove to Monticello to return library books. I drove around Monticello for awhile, trying to decide whether or not to stop for something to eat. I was at the point of low-blood sugar that, compounded with my brain fog, created a situation where I couldn't make a decision to save my life. Also, it would seem that most of the places to eat in Monticello are closed on Mondays. I finally just went to the farmer's market and bought some squash and some very plump and juicy-looking green Vidalia onions. On my way home I remembered the Hilltop and although I really wanted one of their chicken salad sandwiches, I just could not make the effort, came home and ate leftovers and managed to get the ironing board and iron out and stood and ironed and watched "Schitt's Creek" as mindlessly and automatically as a robot.

I listened to a less than an hour today of the wrap-up of the sham impeachment trial and that certainly did not improve how I felt. Trump's attorneys lied and lied again and again, defending what cannot be defended and the House managers tried and tried again and again to make a case for removal but they sounded defeated and even sadder than I was. I finally shut it off. I had no energy for anger yet I know it's there inside me, just waiting for its own chance to be stirred up, reactivated, recharged.

There's a stray cat who's been hanging around recently. Have I mentioned this? Most likely. Every evening, just after sunset, he comes in close to the back porch and cries the most plaintive of cries. Mr. Moon and I agreed that he's begging us for food, perhaps for shelter. Who knows? Perhaps even for love. And I want so badly to feed him but I know what will happen and lately Maurice has become even more insane in her attempts to keep Jack out of the house. They fight every day and it's not always Maurice who starts it but she does sit at the place where Jack comes in on the porch and waits for him to try and come in and if he shows his face she hisses and yowls and spits and curses at him. Last night as I was typing she wanted to get on my keyboard and I gently removed her whereupon she grabbed my hand with the force of a panther and bit down on it so hard that I swear she almost broke some bones within it. It ached for hours although strangely, her teeth and claws only left pinpoints of blood. I really don't know how she does that. But I can only imagine what would happen if we tried to bring a new cat into the fold.
It just would not work.

I feel like I should apologize for this post with its narcissistic dreary ramblings but look- this is sometimes how it feels when you're a person with depression. The sky can be so blue and yet, the heart can be so gray. And if you ever feel that way, you know what I mean and you may need to hear that you are not the only one. That this does not mean you are crazy but that you are a human being with what we so euphemistically may call "challenges." And that we may well wake up the next day feeling foolish and ridiculous for having wasted a day of this life feeling so hopeless, so helpless. Absolutely mystified at how these moods can come upon us.
And if you don't ever feel this way, perhaps someone you love does and these words can help to explain a tiny bit of how the person who suffers from depression can perceive things.
It is as mysterious to us as it is to you.

I'm going to go make up a loaf's worth of sourdough now. And I'm going to go to bed early. As Moira said in an episode of Schitt's Creek- "Let's go. I've had enough waking hours for this day."