I Was Like Mary Poppins Today But Without The Magic 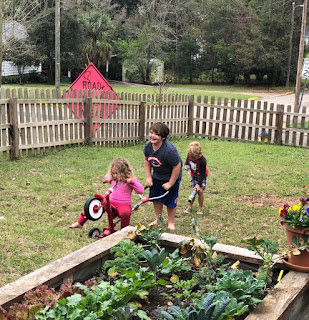 Mr. Moon did indeed get himself out of the bed at 2:45 this morning which is unspeakably wrong but at this moment, he is home and safe and in his chair and there is a very large van in my yard.
Bless his heart. I am so glad he's home.

I got up at 7:15 which is early for me but I went to bed early so no problem. I got to Jessie's at nine and just a little while later Jessie and Vergil left for the hospital. The boys were happy to see me and we started in on a day of books and conversations and back-hoes and track-hoes and pretend and snacks and so forth. Lily brought over her kids to play for a little while as you can see above. The boys were out of school for President's Day and everyone had a good time. Laughter abounded. 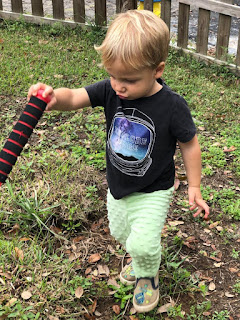 When Owen saw Levon's pants, he said, "That cloth looks just like the back of my quilt!"
I told him that it WAS the same material. He was highly amused.

It seemed unnaturally quiet when the Hartmann children left and the three of us still in the house ate our lunches and I knew that Levon was getting sleepy. Jessie told me, via text, that I could put him in his crib and see if he'd fall asleep. August told me that Levon needed his milk. "But you don't have any," he said.
"True," I said. "But your daddy doesn't either and he can get Levon to sleep."
I changed his diaper and asked him what he wanted to take to bed with him.
"The puppy? The soft monkey?"
"No!" he said. "Track-hoe!"
Well, of course. What was I thinking?

I put him in his crib and he was quiet for a bit but then he started up crying and neither August nor I could handle that so we went into his room and I picked him up and sat down in the rocking chair and that little boy put his head on my shoulder and he fell asleep. While I was rocking, August was being very quiet, or at least trying to be, but there was a running conversation, albeit whispered. At one point he made a sad face and said, "This is how I look at my dying loved ones."
No. Really. He said that.
Jessie says he's going through a worrying-about-death phase, asking the usual questions. Where do we go? Is there heaven? Etc.
He didn't dwell on the dying loved ones theme for very long though. He noticed that I had a tiny boo-boo on one of my toes so he disappeared and came back with a bandaid. He unwrapped it and carefully bandaged me up. I thanked him. It's so nice to be tended to, isn't it? 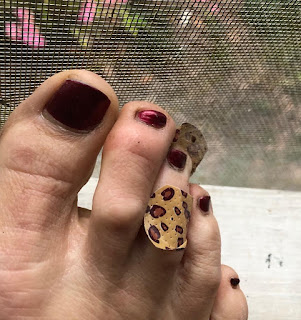 And then Levon was well and truly asleep so I put him in his crib and sent a picture to his mama so she'd know that he was safe and fine. 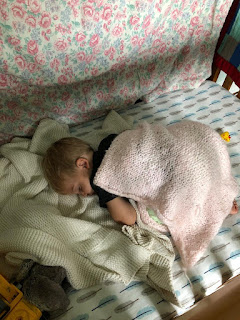 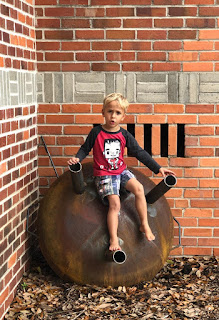 and we had more conversations. He has a lot to talk about. Many of these start with the words, "Mer, I have to tell you something."
And then he does and we go from there.
We read some more books and then we played a little of the "Monument" game on my phone which is the only game I have. It's very, very low key and you have to think and it plays ethereal music. Owen and I used to play it together. It's cool. Very problem-solving oriented.
And then Levon woke up and then Mom and Dad came home.
All was well.
By the time I left, Vergil was walking about and getting hungry and Jessie was attending to two boys and one man and she seemed to have it all calmly in hand.
I ran by Publix and got a few things, came home and unloaded my groceries, put them away. Then my husband came home. I know that when he gets off the road he's never very hungry and so I'd planned to just make a nice salad with some tuna on it, a sort of bastardized Nicoise salad and I told him that. He laughed.
"Guess what I had for lunch?"
"Oh god. What?"
"A tuna sandwich and a Greek salad."

Of course. He claimed that it had all been so tasteless that he'd love to try it all again.

Must be why our grandchildren are all so sweet.
When I was changing Levon and August was helping me, I said, "Isn't it funny to think that I used to change your mommy's diaper?"
August agreed that it was. And I said, "Well, everyone starts out needing their diaper changed."
"Even Boppy," he said. "I wonder if he had a beard when he was a baby."