We Go To The Doctor 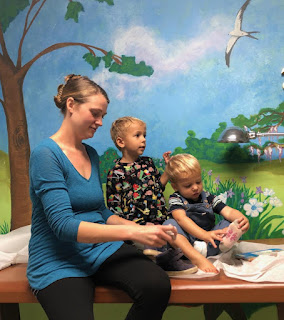 Another trip to town this morning, this time to go with Jessie and the boys to the doctor. They had an appointment for Levon to get his two-year old check-up and for both boys to get some vaccinations. There was a mix-up about the time and when we got to the office at ten, they told us to go away and come back at eleven.
Sigh...
So we drove over to a nearby coffee shop that has toys and books and Jessie and I got lattes and the boys got juice and we all shared a nice, toasty bagel with cream cheese. The boys played and soon it was time to go back to the doctor.
This doctor is so sweet. He never pushes anything.
"Would you like to discuss vaccinations?" he asked today after the check-up. Jessie's had her boys get their immunizations on schedule and she wanted to continue that but it was respectful of the doctor to not just assume. He also blew up an exam glove and put a face on it and gave it to Levon to play with while he and Jessie were talking.
Levon needed two shots and so did August. August had gotten a flu shot last fall and he was full of bravado because he claimed it had not hurt one bit. Being the honest mother that Jessie is, she told him that some shots hurt a little worse than others but it's never as bad as a bee sting because once it's done, it's done. Levon went first and it was as awful as it ever is. Not really awful but that sudden wail and that look that says, "You've betrayed me! Mother, you have betrayed me!"
She took him in her arms and gave him some mommy milk and it was August's turn so I held his hands. I knew he was nervous, despite his brave words because he kept saying, "Mer, I want to tell you something."
But the moment had come and they have three nurses to do the shots. One to hold legs, the other two to give the injections. August wanted to watch and so he did and he did not cry although afterwards he told me that it had hurt. More than a pinch. But he was fine.

And that was that.
We were supposed to meet Hank and Rachel for lunch at El Patron but Jessie decided that she would just take the boys to get a Wendy's kid meal to treat them for being brave and dropped me off at my car. I met my boy and his girl and another friend and we had a good lunch. Then on to Costco and Publix where Lily was working so I got to see her too. We discussed her kids coming to spend the night with us tomorrow and when I asked her what they would like for supper she said, "Barbecued chicken in the oven? Macaroni and cheese?"
And so that's what we will be having.
And broccoli. Which Maggie loves.

It is raining. The frogs are making their shrill whistle. The temperature is dropping. When I left the house this morning it was spring and by the time I was on my last stop at Publix this afternoon the weather had changed enough that I felt silly in my Croc flip-flops until I looked around and noticed that I was hardly the only woman wearing inadequate shoes. The forecast calls for it to be in the high thirties tonight, the low thirties tomorrow night.
Oh, Florida! Make up your mind!

I have bread "rising". Somehow I have lost my touch or else my starter needs some sort of rejuvenation. The last several loaves have been disappointing in their rise. I believe I may be making the dough up too far in advance of when I want to bake it. I shall experiment but meanwhile, tonight's loaf will be one of those but-it-tastes-good! offerings. Hell, what doesn't taste good with butter on it?
I better get back to that and there is also laundry to fold, a smoothie to make for tomorrow, a dishwasher to unload, the rest of the supper to make.

Let's all be brave. Let's all rest well tonight.