Knock, Knock. Who's There? The Four Horsemen Of The Apocalypse. That's Not Funny. I Know 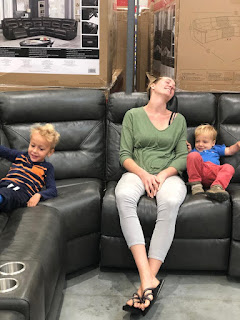 I went to Costco and met Jessie and August and Levon this morning. I didn't need a thing but I pushed the cart and talked to August while Levon held on to the cart and walked with it, thus pushing it in his mind, I'm sure, while holding his mom's hand on the other side. It was a slow ride but we made it through.
We're not sure what's going on with August's hair. Something's up with it. It's not exactly curly now but it's pretty wild. He just truly discovered knock-knock jokes.
This one made him laugh longer and louder than I've ever heard him laugh:
"Knock, knock."
"Who's there?"
"Lemmy."
"Lemmy who?"
"Lemmy in, I have to poop."
There's also the "Lemmy in, I have to pee" version which makes him laugh almost as much.
Two real belly-rippers there, y'all.

I was so glad to be with them. This anxiety has its claws in me. But what do you do? Staying in bed and trembling would be the worst thing possible. So a trip to Costco with Jessie and the boys was a lifesaver.
After we finished there I had to go sign a contract with my husband on a rental agreement. That didn't take long and then we met up with the Jessie and the comedian and the track-hoe-guy at Maria, Maria's. The food was was wonderful and a couple came in and sat next to us and had no idea what to order so they asked us what we were eating and we told them and that's what they ordered.
I hope they enjoyed it as much as we did.

After lunch I went to three thrift stores. Shopping at thrift stores is a decent distraction from anxiety or at least it's something you can do with anxiety for short periods of time. The first place had a cat named Sampson who followed me around and asked for scratches and I gave him plenty. I didn't buy anything there. They had some cashmere but in either the wrong sizes or the wrong color and it all cost too much.
The second place was one of those godly places. They play Christian music on the speaker system.
You can only imagine how little time I spent there.
And then on the way home I stopped at the Bad Girls Get Saved By Jesus thrift store which is also a godly place but they don't play any music. They didn't have much inventory either.
So. Three thrift stores and I didn't purchase so much as a martini glass or a children's book. I removed myself from the sticky web that had seemed to capture me and got in the car and drove home the long way, past many trees and farm houses, up and down the rolling road.

When I got home I took the trash and I cleaned out the chicken house.
Same as it ever was, always and always.
I listened to a few moments of the vote count on public radio. I have to stop here and say that Mitt Romney is far more of a man than I ever gave him credit for being.
Last night I listened to a few moments of the SOTU speech but I couldn't go on with it as the Republicans cheered and yelled for their Anti-Christ-ian Donnie Johnnie.

Jessie and I were talking today about different Democratic candidates and I said that I didn't think it mattered. That I think that Trump will win again, either through election interference or the fact that his supporters can't wait to do it again.
I got behind this vehicle today in traffic. 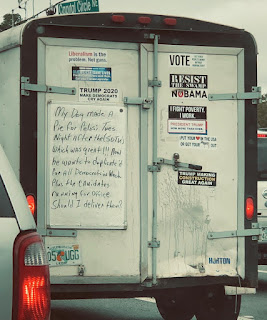 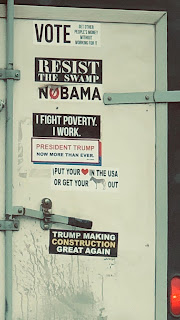 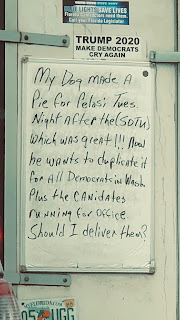 So clever. So classy.
This is where we are.
Not to mention in a place where the president refuses to shake the Speaker of the House's hand and where she, after the speech, rips her copy of it in two.

We're supposed to be in for some big weather tomorrow. Not metaphorically. If I don't post tomorrow night that'll probably be the reason why.
Probably.