When I walked into my bathroom this morning I was struck by how lovely the sun streaming through the front windows and filtering through the blues and yellows was. How cheerful and glowing. The clouds have finally disappeared and we had sun all day long and it was a joy. I do love the rain but after days of cloudy gloom and drizzles, it's just a small but true miracle to see the sun again.

Last night Lily asked Jessie and me if we'd like to go get pedicures today. Both girls had dad-childcare going on and could get out of the house on their own which is of course another small miracle and this morning we stayed in touch as to schedule and so forth and when I'd finished most of my chores I got dressed and drove to Lily's and picked her up and then drove to Jessie's and we picked her up and we went to a nail salon which advertises as "organic" but that may refer to the fact that anything which contains the carbon molecule is, in chemical terms, organic unless UPI nail polish has suddenly changed its formulas.

Remember the last time I got a pedicure and the old guy who did my feet told me that they were "so dirty"?
That was such a horrible experience. But today was completely different. Again, I had an older guy, older than let's say thirty but far younger than me. But he was so very, very nice. By the time he was done with all of the magic, my feet looked as good as they've ever looked in my life and I have a new friend.
When we left the salon, he called out to me, "Good-bye, Mary!" and I called back, "Good-bye, Stephen!"
I felt so special. 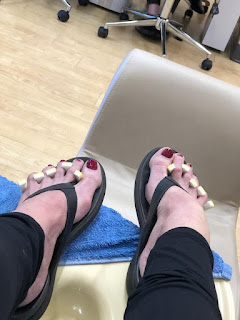 My long-time favorite nail color, "I'm Not Really A Waitress" by OPI.

Then we went and had some extremely good middle eastern food and then we went to Goodwill! But the most interesting thing we found there was Ms. Melissa who was also shopping.

While all of this girl-gadding-about was going on, Vergil and Boppy and August and Levon took the small boat out to go fishing on the St. Mark's river. This of course thrilled my husband and I hope it made Levon and August and Vergil happy too. Here's a picture that Vergil sent. 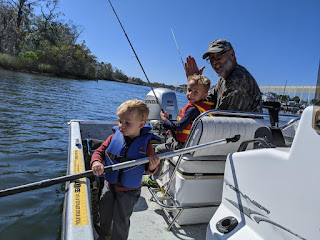 Glen told me that Levon had that paddle in the water almost the entire trip. That's what he wanted to do and why not? It wasn't hurting a thing. No fish were caught, not even a nibble, which is sad but Mr. Moon brought home the little bait shrimp and just boiled them and I've made a cocktail sauce so there is that.

I hear that the Super Bowl is on tonight. I mean, you just can't not know somehow although I have no idea who's playing in it and couldn't care less. Mr. Moon will be watching it but in a vast and grave disappointment he discovered that our patchwork TV reception options do not include the network which is showing it although I'm pretty sure he can watch it online. Stephen, my new friend, told me that he does not get it either but will be watching it at a wings place which makes sense because wings seem to be the Super Bowl food to enjoy while watching the game. I've never really grasped the pleasure in eating wings anymore than I've grasped watching the Super Bowl but I am aware that tastes and pleasures differ.
I respect that.
If I watched a football game I'd be constantly worried about brain injuries amongst the players and I don't need that sort of stress. I do like the fact that many players now have dreads and other long hair coiffures (mostly because I believe that the more hair, the better protected those heads are) and those guys have some nice butts but neither of these things interest me enough to keep me glued to a screen. I have done my job in that I made a snack of nachos for my husband and that's more than he asks me to do.

Yes. It has been Sunday but it was a fine and pretty one. I got to hang out with two of my daughters and have learned more about them and have laughed a lot while at the same time, my husband got to go fishing with his grandsons which is something that makes him so very happy. I haven't looked at the news all day and it would appear that the sun still rose, shone, and set.

Off to go make supper.