I Got Dirty Knees 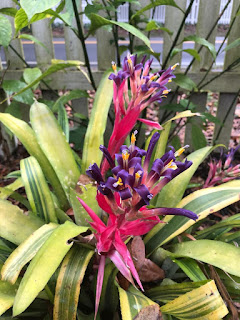 I need to walk around my yard more. I almost missed those beauties which are the blossoms of the bromeliads growing in a rooster planter on our dearly departed Elvis's grave. Red and purple together are almost an embarrassment of richness, don't you think?
Today was a day I needed to be outside and that's mostly where I was. I was going to get up and go to Maggie's first hair cut but I overslept and had been having the most godawful dreams and it occurred to me that it was a day for me to rest my soul. I had drained the well of social and human interaction. The dreams were full of much of the same old stuff- a huge house filled with foul garbage and dirty laundry and a filthy kitchen. Somehow it was three o'clock in the morning in this dream and I needed to write a poem for a college exam (about love) and I could not settle down to write until I'd at least tried to clean up some of the horror in the house and there were people everywhere, milling about, who seemed to live there and they were all obviously pigs and not concerned in the least about the state of the house.
The new thing there was the poem- I've never been given that particular dream before and also, my mother and real father were in the dream although neither one of them resembled my parents. My mother refused to listen to me about the state of the house but my father (and this was really weird) did.
"Daddy," I told him, snuggling up a bit to him, "This can't go on. This house is unlivable! And it's all...his...fault."
I meant my stepfather. And my father, who somewhat resembled Wilford Brimley, said, "I know honey, but we're not done with him yet. There are still things we need to get out of him."
And he meant that in some sort of financial way.
Another different part of the dream was that there was one woman there, a young woman, who not only seemed concerned about the state of the house but also managed to create a little order in the garage.
There was another part of the dream where I had to somehow get myself from deep in the woods to Monticello at night without a car and I have no idea where that came from. I don't think we need to consult Freud about much of these dreams but there are parts which mystify me.
But needless to say, I woke up exhausted and defeated and completely unable to drive to town.
So I called Lily and wept a little on the phone telling her that I wasn't coming and I talked to Maggie who was so sweet and she told me she loved me. Lily took pictures and here are a few of them. 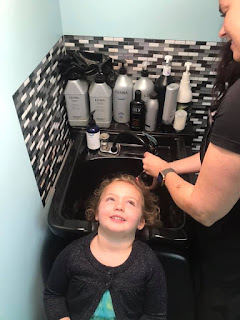 Looking at Melissa with eyes of love. 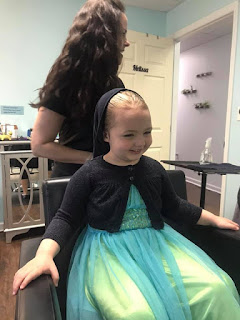 Doesn't she look like a little nun or perhaps a miniature Amish wife? 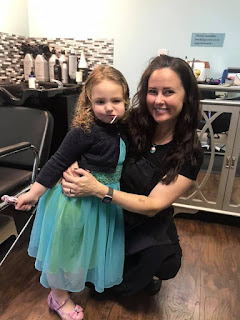 And that, of course, is the way all of the children's haircuts with Melissa end. Smiles and lollypops. Lily said that she only got a tiny bit trimmed. I swear- if you pull one of those ringlets, the hair goes down past her waist.

So I missed that and I just took it slow, slow. Eventually I went out to the garden. When Lon was here he suggested in the most gentle, kind way that if I thinned my plants more that they might get a little bigger.
"I know," I sighed. "I just have so much trouble doing that. It's painful. And honestly, this is the best I've ever done at thinning."
We looked at the stunted collards spaced approximately four inches apart (they're supposed to be eighteen inches apart) and busted out laughing.
So today I determined to go out there and do some radical thinning.
Well. Okay. I thinned a bit.
Then I did the same for the mustards. And then the carrots and baby arugulas.
Maurice helped me with that. 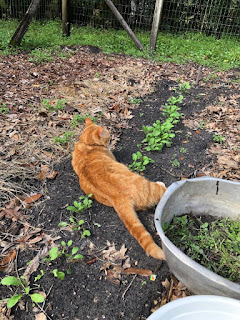 BY CRUSHING THE SEEDLINGS!
That cat.
I discovered that my broccoli is actually making broccoli. 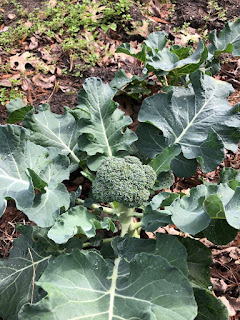 That is so pathetic but it's the best I've got. If I can just keep the worms off it, we will be able to get at least one meal's worth. I do have other plants but this one has the biggest crown on it.

I trimmed all that I had pulled and washed everything. 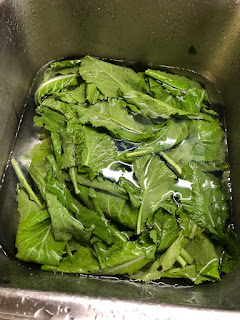 A sink full of collards. 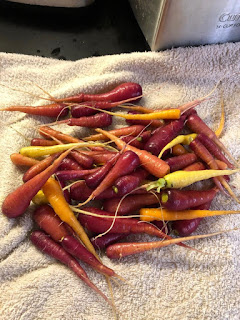 So now my refrigerator is filled with fresh goodness including much of the lettuces that Lon brought us from his (decidedly NON-STUNTED) garden. I will cook the greens tomorrow and last night's supper of salad was so good 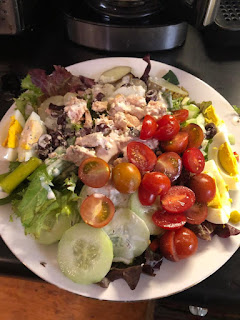 that I've decided to do it again tonight but with some sliced venison tenderloin that's only been in the freezer for a year and a half.
It'll be fine.

And although I'm tired, my soul feels like it's been recharged to at least one-third of a full battery. I used to get embarrassed about how much socializing exhausted me but now I just accept that that is part of who and how I am. Of course, in some ways, a weekend like last weekend is incredibly enriching and fills parts of my soul that no amount of house-nesting can do. There is no doubt about that.
But then it's time to rest and settle. To untangle and unwind. To be quiet and perhaps kneel in the dirt.

To top it all off, I washed our sheets and pillowcases today although Friday is my usual day. You know why I did that?
Because I could.