Gettin' Better All The Time

I have felt so much better today that I determined to go to Publix as soon as the Ibuprofen kicked in, which I did. I needed a few things and it was good to get out of the house although by the time I got home I was most glad to be here.
I've spent most of the rest of the day watching more cult-TV. Actually, I just finished watching Gloriavale which is what I was watching yesterday. It's a three part docuseries. Gloriavale is a religious community in New Zealand which, when the documentary was made, had about five hundred people in it. If you want to see the official website of the community, not the film, go HERE.
This is what the people look like. 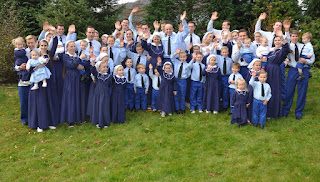 In the documentary, it was claimed that blue has no spiritual significance, it's just easy if they all wear the same color and blue is it. All the women wear the same dresses. All the men wear the same pants, shirts, and ties. Same for the children. They wear these clothes for all occasions including swimming. And running. And biking. And working. Although the men do wear cover-ups when they're working with machinery or in the fields or in construction. And the women can wear either pink or powder-colored dresses when they marry and the groom gets to choose which color. Most of them choose pink.
It was interesting how the film was made. It was narrated about like a wildlife film but with less dramatic flair. Very, very matter-of-fact. No judgements although differences between life in the community and life in the rest of New Zealand were sometimes pointed out. The community, as I said yesterday, is based on strict interpretation of the New Testament and is EXTREMELY patriarchal. God speaks to the men and tells them what to do. Men tell the women what to do. Everyone tells the children what to do. They all live in sort of dorm-like arrangements and mostly eat communally. The men do work as I described above and the women do all of the cooking, sewing, cleaning, laundry and teaching. No wages are paid to anyone and all serve for the greater good of the community and their god.Women have as many babies as "god gives them." They believe in using scientific methods including artificial insemination to keep their dairy herds top notch but don't believe in using any sort of birth control at all when it comes to their own breeding practices. Marriages are arranged. The "Shepherds," as the elder men advisors are called, keep records of who is related to whom and when a young man decides he's ready to marry and start a family, he goes to them and they select a bride for him from a pool of women who are not cousins of his and who their god tells them would be a good match. The man/boy then proposes to that woman/girl and she accepts because god has spoken and they court for six weeks WITHOUT TOUCHING and then they get married. The wedding is a big deal and everyone attends and the man promises to love God above all and to always instruct the woman on how he thinks she should act and to be a godly father. The woman promises the man to be a godly wife and mother and to be willing to be submissive to the man and promises to make him happy.
And basically asks him to now fuck her.
No. Seriously.
At this point, after they're declared married, the couple goes off to a specially prepared room where they "become as one flesh" and then they return to the wedding venue where everyone is waiting and dinner is served.
Because the Lord told them to do this.
And the divorce rate is zero. Because it's not allowed.
Watching a twenty-two year old woman marry a seventeen-year old boy and then sing a song to him that she wrote about how she wants him to always instruct her on how to live and be a good wife is enough to make you feel ill. 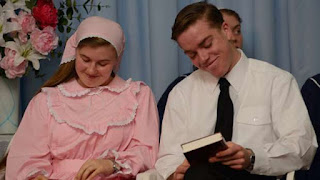 But hey! They do really believe in home birth! And you know I love that part! But get this- if the birth has complications, it's up to the HUSBAND to decide whether or not to go to the hospital. Not the woman, not the midwife, the husband.
Ooh boy.
The woman are given two weeks off after a baby is born and then it's back to work and the baby goes into the creche. Or nursery. Children are taught that their god is always watching them and that hell is very real. And if they're not good, that's where they'll go.
Needless to say, some people do leave. But when you're like second or third generation born there and you have very little access to the outside world via TV or internet or movies or news of any kind, it's easy to see how thorough the brainwashing can be. And from listening to the Mormon Stories podcast I know that one of the hallmarks of a cult is that they make it very, very difficult to leave.

SPOILER ALERT:  They are waiting for the return of Jesus. It could happen in the next ten years. Or tomorrow. Or in twenty years. But SOON! And then they'll all go to heaven! It'll be awesome!

So. The docuseries (three parts) is streamed on Amazon Prime if you're interested.

And that's all I've done today. Go to Publix, watch TV. Crochet. I did do a little yard walk-about and took some pictures of spring coming. 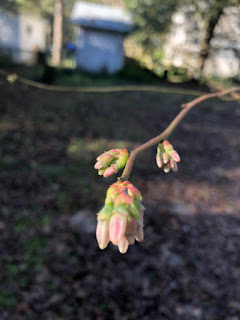 This pretty little bud is on one of the blueberry bushes. I never get any blueberries because they don't get enough sun to make more than a few of the fruits and the ones I do get are neatly snatched by jumping chickens. 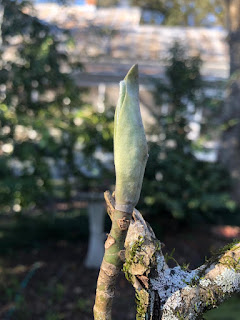 The Ashe Magnolia is putting on its velvet gloves. 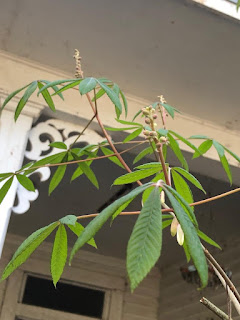 The Buckeye blooms are just about to color up. 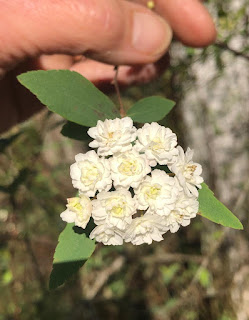 And this is the blossom of the Bridal Wreath Spirea. Now, if you were a fairy bride, what could possibly be better to hold as you walk down the aisle? Unless you're a fairy bride in Gloriavale in which case you'd only be allowed to carry a Bible down the aisle. A teeny-tiny fairy Bible.