WHY MUST LITTLE BOYS YELL AT THE TOP OF THEIR LUNGS ALL OF THE TIME????? 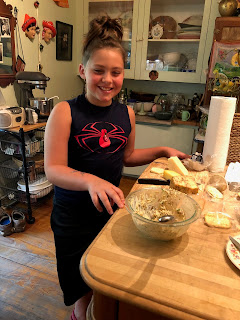 At one point today I had eight people in my kitchen not including me and that is the only picture I took. This was the most social day I've had in forever and we barely got out of that kitchen and as god is my witness, it's a sin and a huge mistake that I don't have a couch and a full table and chairs in my kitchen because no matter what's happening, that's where we all hang out.
Which is not a unique situation. The kitchen is where everyone hangs out in every house in the world, probably.
I'm sure it all started when people gathered around the fire at the front of the cave where the wooly mammoth ribs were cooking over the flames and no matter what design changes in human habitation have occurred, it's still the same story and that is that.

We didn't have any wooly mammoth ribs but Rachel did bring over some smoked mullet dip she made which Mr. Moon and I just now agreed was as good as any mullet dip we've ever eaten in our lives and we've eaten our share of mullet dip. I've even made my share of smoked mullet dip and Rachel's is better than mine and I'm not ashamed to admit it. She and Hank came out for a little Mama visit and not only did they bring the smoked fish but also crackers, cheese, and guava paste.
The perfect lunch.
Then my dear friend Liz and her son Leland showed up and the loaves and the fishes (crackers and mullet dip) somehow expanded to feed them too and Liz brought in some blueberries she had and then Lily came over with Owen and Gibson and Magnolia, and Owen ate his share of all of it and Gibson did too, I think, and Maggie played with toys and had a popsickle.

It was quite the Sunday afternoon.

All the time this was happening, Mr. Moon was painting his bathroom. This is the color he chose and I absolutely love it. It is called "Painted Turtle." 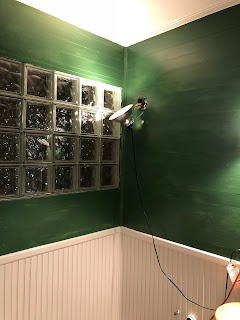 This is going to be about the coolest bathroom in the entire world and still somehow it's going to fit in with this sweet old house and be functional and beautiful, all at the same time. I just can't get over the skill and design-sense he's showed every step of the way in the creation of this bathroom.
I'm just in awe.

And all of that is what was going on here this afternoon. Eventually everyone headed on back to their own homes except for Lily who, with her daddy, was going to shuttle her van to the repair place in Tallahassee and so Owen and Gibson stayed with me and I was being mean Mer and wouldn't let them play Wii. I wouldn't let them play Wii because I am working on a needle project and wanted to do that and watch something that we could all enjoy which was difficult. I sort of forced them to watch an episode of the old, old Twilight Zone and Gibson had no use for it and Owen said he sort of hated it and sort of loved it. But one episode was enough. I mean...black and white? I told him though, that he will think about it later tonight and I'm willing to bet he will.
I hope I haven't damaged him.

So then we watched some of The Blue Planet and Owen was totally into that and when there were dolphins dancing through the seas I said, "Aren't they amazing?"  he said, "They are magnificent!" and I swooned a little because magnificent is one of my favorite words and he had used it so perfectly.

Then it began to thunder and lightening and rain and they wanted to go out to the porch to watch it and I said, "Fine, but you have to clean up all the toys first," and they did, believe it or not, and then we went out to the side porch with the swing where I spent so many hours holding them when they were babies and singing to them and then, when they were older, reading to them and then, when they got older than that, playing pirate ship with Owen who was always the captain and Gibson and I were always mates.

Today Gibson sat beside me and I cuddled him to my side and Owen danced like a crazed person in the rain run-off from the tin roof, his hair and clothes getting soaked and I did not care at all because that is exactly what kids are supposed to do.

This all sounds pretty perfect and idyllic and it sort of was but I will say that THOSE BOYS SOMETIMES YELL SO LOUD THAT I THINK I'LL GO INSANE, just telling each other things like, "OWEN! YOUR MAN BUN IS GETTING SOAKING WET!" and "I DON'T CARE!"

And so it was a most unusual Sunday but I got to visit with Rachel and Hank and with Liz and with Leland and with Lily, a little bit, and with the boys quite a bit. And Maggie was her most adorable self. When I told her who Liz was and who Leland was, she promptly went and hugged them as she knows that is what we do and also because she knows that whoever she may meet in the company of her family is family too, which they are. Lily reports that Maggie has been crying since she left my house after dropping off Boppy (she is borrowing his car) and picking up the boys because her mother is mean and did not let her go tell me hi. Of course it was pouring rain and still lightening and thundering and getting her out and back into the car seat would have been miserable.

She's just a tired little girl but I should have gone out with an umbrella and opened the door and kissed her. I won't make that mistake again.