From Mangoes To Memories 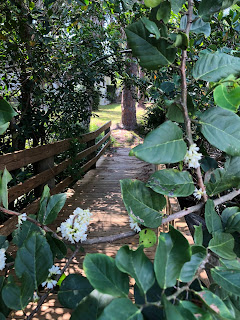 Mangrove blossoms by the dock at the Roseland Community Center

I woke up with the saddies today, as Sue would have said, for a completely illogical reason which was that I was already mourning leaving. And there was so much I wanted to do which I hadn't done and only two days to do it all in and oh, well, maybe a little bit of regular old birthday grieving as this is the last day of the sixty-third year of my life.

Roseland figures so hugely in my dream world. There are certain spots which are like like the sets in a play where the action occurs.
The river, of course.
The community center but dressed up as a library, which it once was in a way. A very, very limited and tiny way.
The lot by my grandfather's old house.
The little store where we bought Popsicles and bologna.
The railroad tracks.

And somehow, being here, in the real here, is disconcerting and wonderful and a little scary and most of all, amazing.

We took a walk after breakfast this morning, just a small one, down the white sand road on the river up to the community center which I only found out this year that my grandfather donated the land for. Actually, there's quite a long stretch of land beside it which is also park and I'm not sure if he donated that too or not. I had no idea that he and my granny had done that. As I told Mr. Moon today, I had always vaguely wondered why he spent so much time clearing and tending that bit of jungle where the community center was.

At the very west end of the park, there is a huge mango tree. 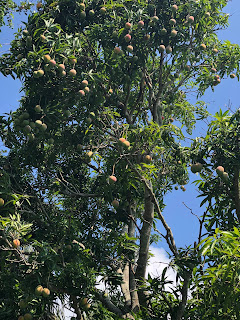 We stopped and picked up two of the fruit on the ground and peeled them by hand where we stood and ate them. 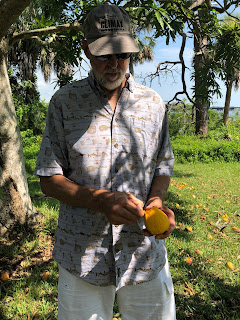 I bet that tree was growing when I was a kid but I don't remember that specific one.

We walked back down the paved road which had been the only paved road when I lived here, a skinny little slip of a road and I remembered each house, each yard, a memory or a million, attached to them all. Each one of them a portal to another time but the same exact place. 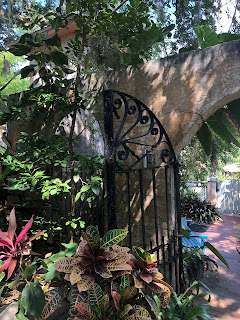 "Thank you," I told my husband as we sweated and finished up back here at the tiny paradise where we're staying, "For being so patient and listening to all of my stupid stories for the millionth time."
"You'd do it for me," he said.
"I doubt it," I told him. "I'm not as nice as you."

And this is true.

We drove to Vero down A-1A which is the highway that hugs the Atlantic on one side and kisses the Indian river on the other. It used to be nothing but jungle for miles and miles and now there are rich-people houses in gated communities almost the entire way, the jungle tamed and trimmed and made safe for the elderly, the young, and probably mostly the Republicans.
I could be wrong.

We had lunch at a place by the beach and a storm came up and we waited for awhile in order to get to our car without getting drenched. Finally, we just dashed for it and we did get wet but I didn't care and I stopped right in the middle of it and took this picture. 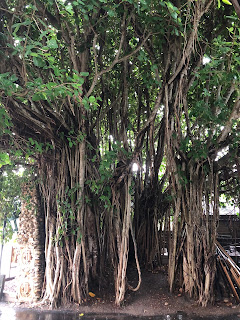 A Banyan tree. Which is a magical sort of tree.

And then back to this place which I am so loathe to leave. It has everything.
It IS everything.
The river, the pool, a bit of jungle, the giant bamboo which clacks deeply when the wind blows, the mangoes, the little tiny house which is all anyone would need. Air conditioning. Running water. The birds, the fish, the dock, the little hidden nook, the sky, the sky, the sky.
Lizards everywhere.
Even the shower where I found this one, tiny as any lizard I've ever seen. 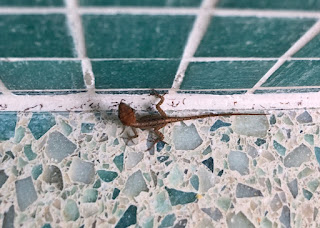 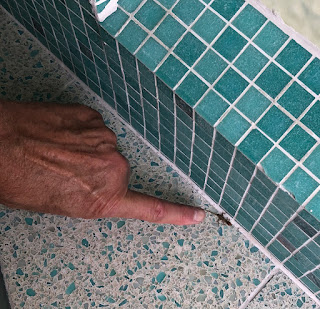 Well.
Although you CAN go home again, there is no guarantee that you'll be allowed to stay forever.
Lord God, Krishna, Buddha, Jesus, Coyote, Neptune, Apollo and Mary, it's blessing enough that your memory dreams have been preserved for real life.

I have so much more to say but it's late.

Here's what the sky looked like tonight off the dock. 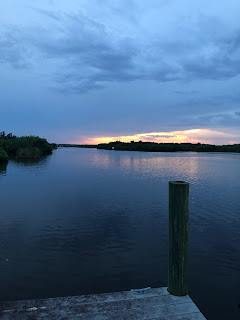 That water just flows and flows and it soothes my soul and it takes me with it in my dreams as well as in this life I've lived for sixty-four years now.

And that's all I need to say.