How Do I Even Manage To Turn On The Oven? 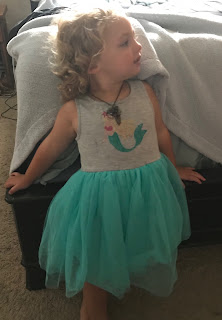 There's Ms. Magnolia June in her mermaid dress which I finally got to Lily when I went to Publix to return the drugs which were not mine. This turned out to be somewhat of a cluster fuck. Not the dress or seeing Lily but the drug situation. Not a real big deal but there was even a subsequent phone call later to clear up a few points.
The whole day has been sort of like that but I actually got a few things done that I've been putting off like getting my oil changed and finally getting some help so I can go online to check my bank balance which should be the simplest thing in the world and actually was and it would appear that I'd been on the wrong page of the web site and oh, Jesus. Really? Really?
And of course the ten-year old chick who helped me made me feel as if I needed to reserve my bed at the nursing home post haste, mostly because we were using a business-owned desktop computer with a MOUSE and I haven't used a mouse in at least seven years and I wanted to tell her that I have a Mac laptop and I pity her for having to use such clunky technology and that before she was born I got my first computer and with nothing but that and a copy of Macs For Dummies, I figured out how to make things work and even get on the World Wide Web which is what we called it then, but of course I did not and instead sucked in my senior citizen anger-shame and smiled and thanked her profusely.

Just now I tried to change the account number for our automatic payment to the electric company via their website which seemed to be so fraught with crap I was required to fill out that I said, "Fuck that," and then I called the toll-free number where of course I just got an automatonic voice telling me to press this and press that until it reached the point where it advised me that to finish I had to go to the website.
Which I had just left.
Oh, dear fuck.

Anyway, blah, blah, blah and I exchanged my bluetooth headset out for another which seems to be okay but the sound sucks. I did get to see the nice woman who helped me yesterday. I swear- I feel like she and I could be really good friends. If I have to go back to Best Buy one more time I'm sure we'll be scheduling coffee dates and discussing our love lives.

And then I went to McDonald's to get an iced tea because I really wanted an iced tea and boy, has McDonald's changed and not for the better! The place was a pig sty and unlike when I worked at McDonald's back when the burgers were made of ground dinosaur meat and we had to add everything up on an order pad with a pencil, there was no one manning (or womanning) the order station and there were computer order stations and everyone in the back seemed completely confused and people were waiting for what appeared to be many long minutes to get their food and I was there long enough to have an extended conversation with a woman who'd ordered in the drive through and had only gotten half her order. She worked at McDonald's when she was young too and we both hate the traffic in Tallahassee and she has religion and I don't which didn't seem to affect our blooming friendship in the least. When she got the rest of her order and was leaving (and I was still standing there, waiting to pay for a fucking cup to self-serve myself some tea) she said, "Nice to meet you!" and I said, "Nice to meet YOU!"
But hey- the unsweetened iced tea was perfect.
So there is that.

And that's what my day has been like. Go here, do this, go there, do that.
Take the trash and recycle, water the porch plants, check for eggs.
There were none.
I've changed my mind about the gender of Apricot again because this afternoon she stood up on an old rusty porch glider in the back yard and bawked and cackled like a hen who'd just laid an egg for a good five minutes. I've never heard a rooster talk that talk.
Now if she'll just start actually laying eggs, I'll be so happy.

Just got another picture of Maggie. 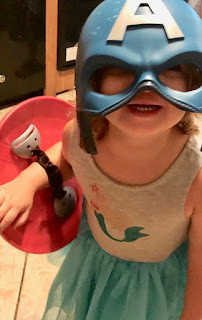 Somehow this makes me feel a little better about everything.
Her generation is going to save the world and they're going to look very, very good while they're doing it. At least if they get the chance.
Sigh.