An Apology To Rich White People, Plus Chicken News 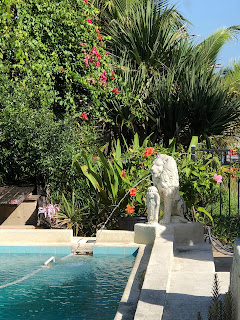 I should not have written what I wrote last night about the clientele of the Ocean Grill. I should not have said, "rich white people." That's stereotyping. I should have just said something like "the hoi-polloi" or maybe "wealthy people from up north who have second homes in Vero Beach" or "drunk, rude-ass people who appear to have more money than manners."
Take your pick.

So that picture up there- you know what it is and I can't tell you how hard it was to leave it this morning. We got everything packed and ready to go by ten this morning but before we left I took one more sweet little blessing dive in that most beautiful of pools beside the bamboo and palms, the hibiscus and bougainvillea.
"Good-bye," I said to the white sand road as we left. 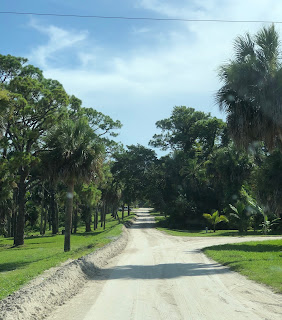 It was hard. It's always hard.

We drove home after stopping for some breakfast and I was in a rather foul mood which is understandable but I tried to keep the fuckiness to a minimum because there was no one to take it out on except for my husband and he's been the sweetest man in the world to take me on this journey to a past he doesn't share, to love me and show me that love so profoundly.

We'd heard from our neighbor who'd been tending the chickens that things were not well with them. He'd found one dead and only about half a dozen were coming to roost so we didn't know what we'd find when we got home.
What we found was thirteen chickens and Mick and Nicey are missing.
It definitely could be worse but it still makes me so sad.
Mick has been such a valiant rooster and I would not doubt that he got taken defending his flock.
Only eight are in the hen house right now so five are roosting elsewhere. Mr. Moon has gone out to look but I doubt he'll find them. Chickens can be sneaky as hell when they decide to be.

And so it is. I am home. Mostly unpacked except for my clothes.

It was a perfect birthday and I am absolutely grateful for it. For every moment of yet another honeymoon with my husband, for every moment of being in the place that gave me so much despite the fact that so many horrible things happened there too.
It gave me that river and my love of water.
It gave me that jungle and my love of plants.
It gave me the ability to understand poverty and how it can affect people.
It gave me years with my grandfather and grandmother.
It gave me my first books and my ability to read.
It gave me a few women who helped form me in the most graceful and selfless ways.
It gave me my imagination as I was able to visualize pirates and treasures and Tarzan and mastodons and worlds beyond the one in which I was living, one of which involved a huge, empty swimming pool with lions at each corner.
And it's not Roseland's fault that my mother married that man and I think I know that viscerally as well as logically.

Oh! Here's the picture I bought. 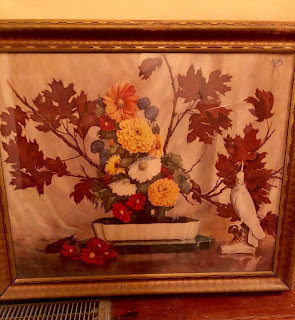