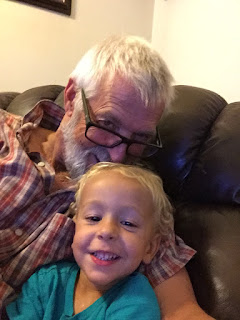 Oh, man! We had such a good time with this little guy. And I am pretty dang sure that he had a good time too. Anything he does with his Boppy is the very best thing to do. He's sweet though and let's me read books to him and give him his bath and get him ready for bed and all tucked in.

Last night I cooked some of that grouper and some cheese grits and made a lovely salad of volunteer arugula which has sprung up in the garden. It seems to be different from the winter arugula and I'm not sure how that could happen but eating a salad again made with greens just picked is heaven. And we discovered something which is that August can about eat his weight in grouper. Jessie says that when she cooks salmon he eats as much as she and Vergil do and I can believe it now. 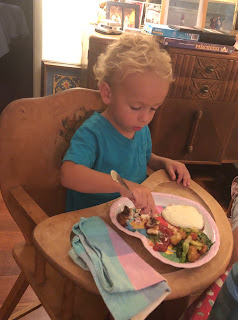 He didn't care a thing about his cheese grits or his salad, he just wanted grouper with ketchup. He tried the cocktail sauce I'd made but I think the horseradish put him off and he went back to good ol' plain Heinz. As soon as supper was finished he was ready for his bath and so off we went and it was a water-world-playtime-happiness event. After he got dried off and dressed in his pajamas, we laid on the big guest bed and read all the favorites. The Little Red Hen Makes a Pizza, A Fish Out of Water, It's A Book, Hide and Seek On The Farm, Hand, Hand, Fingers, Thumb and I can't remember what else. The child wants me to tell him what every pictured character in every book is saying. This gets sticky in books like Hand, Hand in that there are about fifty thousand monkeys drumming on drums. Sometimes I just turn the page and pretend I didn't hear him ask what everyone is saying.
After stories he said he wanted to sleep in the big bed and that I could sleep with him. I said, "Okay," but I have to get ready for bed too so I'll be back in just a little while."
He pondered this and decided that he'd just as soon sleep in the pack-n-play. That, too, was fine.
I put him in it and gave him Zippy and covered him up and kissed him but then he said that he'd like me to move his bed into Mer and Bop's room so that he could sleep in there and that he wanted to stay in the bed while we moved it.
"Well," I said, "Let me go ask Boppy if he thinks that's okay and will help me move your bed."
I went to find Boppy and reported this request and he sighed. "What happened to it's bedtime now go to sleep?" Which is so funny because this never worked with our own kids.
Then he sighed again and said, "Okay."
So we went into the guest room and August said, "Boppy say okay." No question mark there.
And his grandfather picked up one end of the bed and I picked up the other and we moved it through the bedroom, Boppy's bathroom, the mudroom, and into our bedroom as he laid under his covers, serious and still as a pharaoh.
After Boppy told him good-night again, he asked me to scoot his bed closer to ours and of course, I did. Why not? I told him I had to go brush my teeth and put on my nightgown and that I'd come back and get in my bed and read my book. That I would be right back.
And I was and he was still awake, but not fussing, just a little talkative and with some questions, mostly concerning when Boppy would be coming to bed.
But eventually, he dropped off and I made sure he was covered up and then Boppy came to bed and we all slept like stones until quarter after eight when Boppy got up and then I got up right after that and August was still sleeping. He finally woke up a little later and called out, "Mer! I can't get out of my bed!" and I went and lifted him high in the air and said, "I can get you out!" and I put him down and he said, "I go find Boppy!" and he pattered off and I thought how the sound of a little child running on the old wood floors of my house is one of my favorite things in the world.
He ate two and a half pancakes with bananas and peaches and blueberries and pecans in them and also, everyone's favorite- bacon. 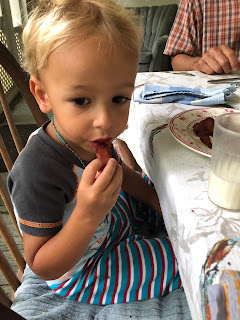 After the chickens were let out and fed some scraps and an egg was found and there was a little more TV watching and some more book reading, his mama and brother came out to get him. 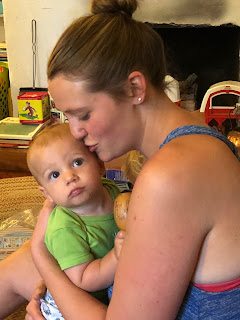 Levon is going through a stranger-danger phase and he is not sure about letting anyone hold him but his mama and his daddy but he lets Mer hold him. This is probably one of the things that makes me proudest in the world at the moment. He seems completely comfortable with me and I know it's just because I've spent a lot of time with him but still...it feels mighty sweet.

Jessie and I went out to see the chickens and honestly, I am now thinking that my big yellow Buff Orpington, Apricot, is a rooster. He/she is growing some very roostery feathers. Jessie's Buff looks the same so we may have gone bust when we bought that pair of chicks.
This could lead to problems but we'll just have to wait and see what unfolds.

August didn't really want to leave. In fact, he told his mother and me that he would like to have some water and then he would lay down and go to sleep at Mer's which is pretty funny. Was he ready to spend the night again? I think so. But good Lord! Why wouldn't he want to hang out some more? Watching TV, drinking chocolate milk, eating bacon and fried grouper, and getting to work with his Boppy. 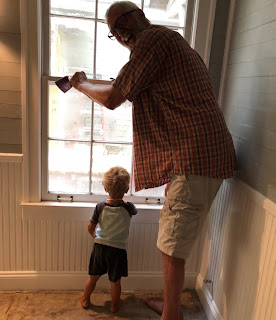 Here they are, sanding together, prepping for painting.

But he didn't fuss too much about leaving.
When he kissed and hugged his grandfather good-bye, Boppy asked him if he'd come back and spend the night again soon.
"YES!!!!" he shouted as he ran through the house, his arms raised high in the air.

Next, though, it will be Owen and Gibson's turn to spend the night and more adventures will be had.
And I can absolutely guarantee that The Little Red Hen Makes A Pizza and A Fish Out of Water will both be read before bed.

Rituals are important and that's another great thing about grandparents- they honor those rituals and they enthusiastically embrace them.
And just think- before we know it, Levon will be spending the night and there's going to come a day when Owen wants to sleep upstairs in his own bed in a space that he will make all his own.
And that will be cool too. 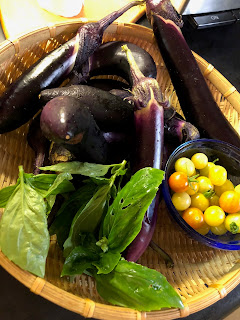 Italian eggplant parmesan for supper, time spent with a grandchild, a rainy afternoon nap with my husband and the Sunday blues forgot to make their appearance.