Being A Grandmother Is Not All About Freshly Baked Cookies. Thank Goodness 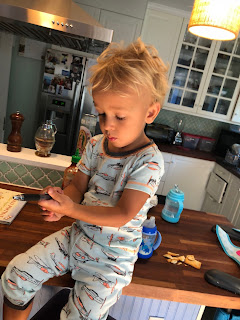 I hung out with two fine boys this morning and it was lovely.
Easy, too.
I think that August would be completely happy to be read to all day long. So we read lots and lots of books and Levon played on the floor or sat in my lap and then took a nap.
Here's how to get Levon to take a nap: when he seems to start getting sleepy, hold him and give him a pacifier if you want and then put him in his little swing and he is asleep. 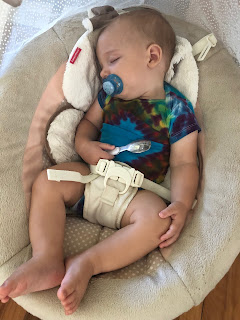 You will note that he is holding a spoon. Throughout the entire morning I'd give him a bite of oatmeal every so often and let him hold the spoon and he was loathe to let it go. As May said when I sent her this picture, "Don't want to lose your spoon. You never know when there might be more oatmeal."
Indeed.
He's simply a happy guy. 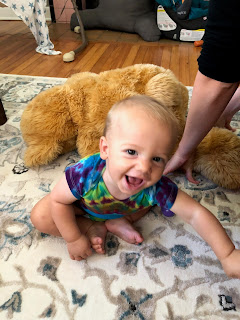 He's a I-can't-help-but-kiss-him baby.
Well. To be honest, most babies fit into that category for me.

August tried out some different names for me today. He's called me "Merm" before and he called me that a few times today. He also called me "Mary." I think he's just realizing that I, like his Boppy, have names which other people call us.
And he can call me Mary if he wants to. I've always loved my name. I'm not sure why but I do.
Hey! If if was good enough for the mother of Jesus, it's good enough for me, right?

He did a few entertaining hat tricks for my entertainment. 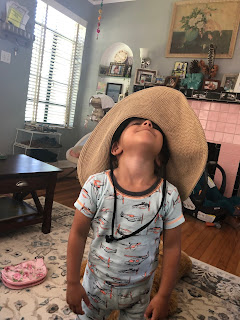 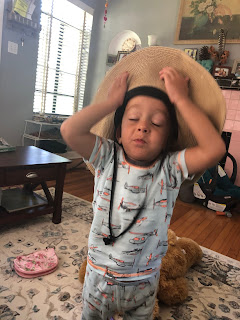 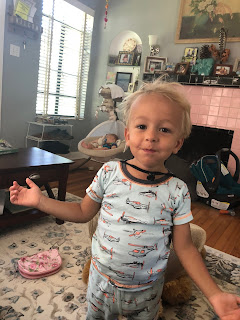 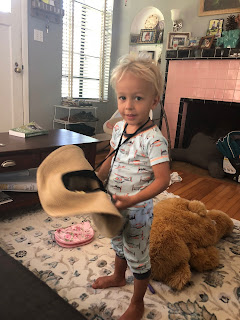 We cuddle-puddled with the big bear. The bear laid on me and August laid on the bear. It was very cozy. He showed me things he's doing in gymnastics class and also, a little yoga. I was quite impressed.

After Jessie got home and I kissed those two little guys good-bye, I met Lily and her three at the Indian buffet where I also had a good time. I was waiting in front of the restaurant and Gibson came running up and slammed me with one of his extra-special, unique and wonderful Gibson-hugs. And then Maggie came running up.
"It MER!" she said to her mother.
Owen dragged behind everyone. He was having a hard day. I think he's already over summer vacation. I can't believe he's almost nine. When I think back on being nine, I feel as if I was already fully formed as an adult. I sort of had to be, living in the situation I was living. It was the year my mother married my stepfather and when my already scary life became far worse than I could have imagined it would. But I remember the feelings I had and how frustrating things were. I remember going into the bathroom and just crying and crying. I was absolutely scared to death to speak out loud about any of the feelings I was having, even before my stepfather began abusing me because my mother was obviously, even to a nine-year old, teetering on the edge of sanity and I suppose I had made a sacred pact with myself not to do anything at all which would push her over the edge. She was all my brother and I had.
And so I was the best little girl in the world.
But Owen has no qualms about expressing how he feels and good for him! But bad for Lily. As all children do, he takes everything out on her, knowing for sure and certain that she is always going to love him. After lunch we went to Big Lots where the boys were thinking about using their saved money to buy a little pool for their yard but none of them were right and they wanted to buy junky toys and Lily said, "NO!" on that and good for her.
Gibson sort of got over it but not Owen. And then we went to the Goodwill bookstore and he wanted this and he wanted that and he didn't want this and he didn't want that and she finally put him in a time-out.
He eventually decided on a book and so did Maggie and Gibson and as our ritual goes, Mer bought them their books and on our way back to where our cars were parked, I told Owen I wanted to talk to him. He didn't really want to, but he did, and we sat down at a table in the shade and I told him that believe it or not, I could remember how it felt to be nine years old and what my feelings felt like and how hard it was. But that I could also remember how it felt to be a mother and how hard that was too.
"Owen," I said, "Your mama is trying so hard to make you happy and you need to try a little harder to make things easier for her. It's the hardest thing in the world to raise a good human being and she is doing her best to raise three."
He listened. I doubt he'll change his behavior but I know he heard me. I said my little piece and we got up and followed Lily and Gibson and Maggie to their car.
"One more thing," I told Owen.
"Yeah?" he said.
"I love you."
"I knew you were going to say that!" he told me. And I'm sure he did. In some ways, that child knows me better than anyone on this earth. And he knows I love him and I know he loves me. And it's not my job to get up in his face about things but once in awhile, I think it is all right to give him my perspective.

I love all my grands so much and each one of them needs me in different ways and I can be part of their lives in different ways, however it is I am needed most, but my most important role in their lives is to give them one more person whom they know without doubt loves them with her whole heart.
Who they know thinks that each one is tremendous and smart and gorgeous and funny and capable and unique and absolutely beloved.
Which is cool because that's exactly how I feel.

Well. That was my day.

I got this picture from my husband. 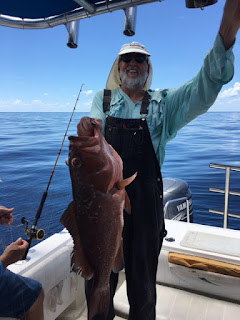 Now that's a fish. It's a red grouper and I'm really hoping it was the right size and species for him to keep because there ain't no better eating in the whole world.

And oh! Hank did a quiz podcast for a guy who has other podcasts and if you want to hear what my son sounds like and what his trivia sounds like, check it out. 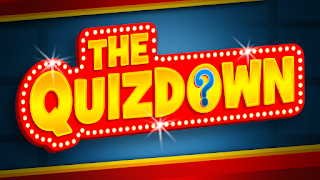 I'm so proud of him.

The evening cricket symphony is rising and falling with disparate voices coming in with harmonies to the chorus. The church next door is probably going strong but I'm sure their windows are shut for their air conditioning and my air conditioning is on too so I can't hear them but the summer praise hymns of the evening crickets are holy to me. They are splendid and magnificent beyond bearing.