For A Day Spent Mostly In A Hospital, It Was Pretty Good

I didn't talk about what I was going to do today because it involved my May and a surgery she was getting and I hadn't okayed it with her but now I have and so yes, I hung out with Michael while May got a vein procedure today at the hospital. She had some veins which were absolutely interfering with her life and it was time to get them dealt with. They were in the leg which was injured when she was sixteen and got hit by a car and I still don't really want to talk about that but I will say that she is not only alive but that her leg is strong and good although she has had a few problems and these veins were the main one.
So I got up early and met them at the hospital at 7:45 this morning and of course it took three hours before they actually took her into surgery and then the work took almost two hours so it was a long day but not unpleasant at all.
May feels about medical things the same way I do which is to avoid them until it's absolutely impossible and they cause her great anxiety so today has loomed large for her. She was pretty cheerful this morning and I think the relief of it finally being the day was the cause of that and she and Michael and I joked and chatted and joked some more after she got all prepped and was in the holding area and we met the anesthesiologist and his student who had a tattoo on his forearm which said, "First, Do No Harm," which I thought was pretty cool, and several nurses and then the doctor came in and of course she had to answer about a thousand questions over and over again but that's just the way it is.
They finally came and got her and Michael and I spent the next two hours just talking and talking and I really enjoyed that. I got to know my son-in-law better and I also got to see once again just how much he loves his wife and that made me feel so good.
And then, at last, the doctor came out and told us that all had gone very, very well.
"She did great," he said, which is always so funny as the patient's only job is to stay alive while they're doing the surgery but it was good to hear those words.
When we got to go back and see her, she was in fine spirits and not the loopy, druggy ones. She just seemed to be perfectly herself and the relief of it all being over was a beautiful thing.
The cessation of dread can be like a rebirth. 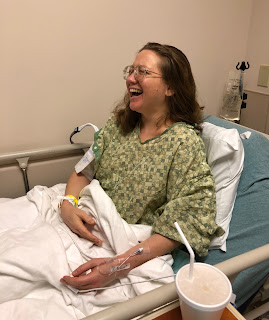 She was laughing at something one of us had said and I promised her I was only taking the picture to send to her siblings and now I've gone and broken my promise but look how beautiful she is! So happy to be done with it. 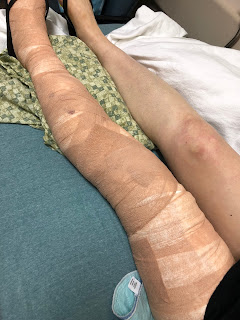 She did give me permission to post this picture of her bandaged leg but it's sideways here and I can't figure out how to make it right but you can see what it looks like.
Pretty impressive!

And then pretty soon they came and unhooked her from everything and she got dressed and they wheelchaired her downstairs and Michael helped her carefully into the car and off they went for home.

Everyone was so very sweet to her and the wife of one of Hank's best friends was a surgical tech (I think) and promised to take good care of her and obviously, she did.

And so that was what I did today. Mostly. I also had to do some bank business in that my debit card got compromised and I had to go through the rigamarole of applying for a new one and blah, blah, blah. And then Publix, of course, because you never have ALL of the foods.

And finally home where all is well. I think Maurice was greatly relieved that I had not left on another trip. She's been sleeping with me ever since we got back from Apalachicola. She may not appear to love me or even barely tolerate me but she depends on her humans and she feels as much love for us as she can. It's been so sweet to have her there in the bed where I can reach out and pat her for a bit of reassurance for both of us.

Do you remember the picture of the clerodendrum I posted a week or so ago?
Here's what it looked like today with the late afternoon sun shining through it. 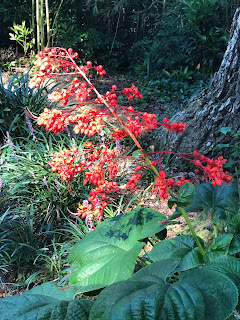 A close-up of the individual blossoms. 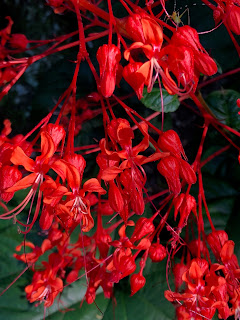 But not as pretty by a millionth as my beautiful precious girl May whom I hope is, at this very moment, eating a Popsicle and either watching Netflix or reading one of the books that her sweet husband bought for her to have during her resting and healing time. 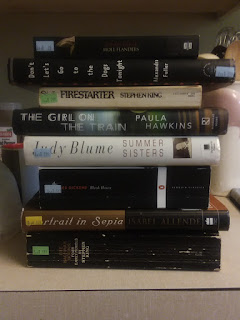 Not only is he a good man, a sweet man, he is also a man who obviously is very smart and who knows his wife so well. And loves her even more.

Ah. Makes a mama's heart be at peace.