What We Did Today 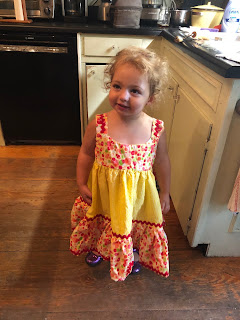 Well, the dress I made for Ms. Magnolia June is obviously too big but she doesn't seem to care.
Her visit went very well. She didn't fuss at all except for once when she fell and once when Maurice scratched her (I warned the child) and once when, after cuddling and singing and book-reading for about an hour last night I finally gave up and put her in her bed and walked away.
Luckily for Maggie her grandfather came in and took her out of bed and held her awhile and then put her back in her bed and stayed in the room with her until until she fell asleep.
That child does love to cuddle. And does it in a very comfortable manner, somehow. She woke up at four and I just brought her back to our bed because four o'clock in the morning is not a time when I'm prepared to do sleep training.
Okay. I'm never prepared to do sleep training, never was and never will be.
But she cuddled up to me and made me put my arm under her curly head and we slept pretty well.

She's just such a gorgeous child. And she's a busy child. She was so well-behaved and if she wanted to do something that I did not want her to do (eat chocolate) she would ask why about five times and I'd carefully explain why (because she had a piece in her mouth as she was asking why) and then she'd go on to the next thing. 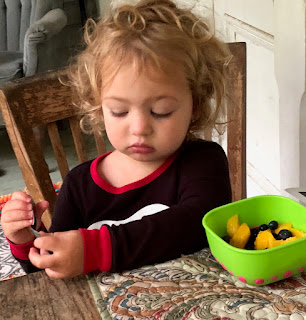 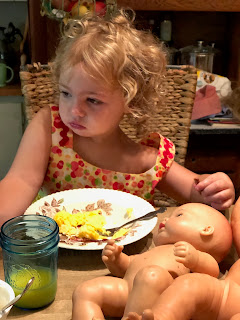 She loves her babies. She plays with them a lot, carefully putting them into bed with pillows and covers and kissing each of them good-night. She's a good little mama.
So there was baby-playing and there was chicken and goat-feeding but it was already so hot and so buggy and miserable outside that we cut all of that pretty short although we did go pick the squash in the garden. 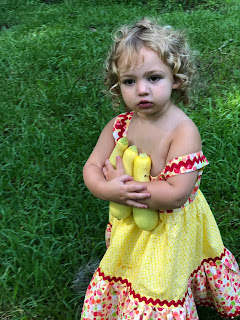 Isn't that a beautiful picture? She insisted on carrying all three of those summer squashes. She kept dropping one and I kept offering to help but no, she would not let me and made it all the way up to the kitchen with them and put them gently in the refrigerator when I opened it up for her.

We had a bath last night and I say "we" because she wanted me to get in with her and I did which was quite a merry experience. We laughed and laughed. But today she wanted another bath and I could not think of one reason in the world not to let her get in that big tub. 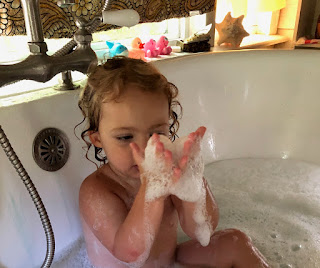 I didn't get in this time but still, there was quite a bit of fun to be had. She washed my arm with a lot of bubbles and this made her so happy. I pretended to be indignant but she knew I was just being silly. And then she had a shower because...bubbles...and then she wanted to get back in the tub and I said, "Sure!"
This time with no bubbles, just fish and mermaid activities.

We did laundry and she helped me fill up the washer and I showed her which buttons to push and she did. She wanted to do the big alphabet floor puzzle and so we did that.
Three times. Well, three and a half. 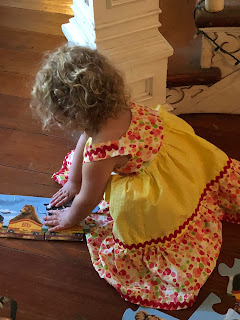 Magnolia is a very industrious child. She played with blocks and the magnet toys and rubber bands, too. And also, the old Fisher Price lap desk that Hank got at the flea market for Owen because he'd had one when he was a little boy and he loved it. 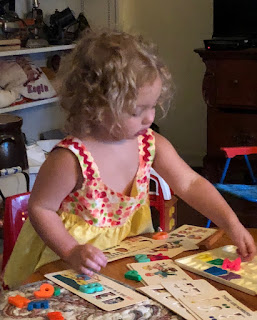 Maggie sings all day long as she goes about her activities. Mostly the alphabet song and the finger family song and she has an amazing ability to carry a tune for a child her age and sometimes she makes up her own lyrics. I think she may have a bit of a gift there.

I realize, looking at these pictures that she seems so serious in all of them. And she was, actually, because she was working at one thing or another in almost all of them. As it's been said many times, play is a child's work and I believe that. I didn't really get involved with a lot of it unless she asked me to and it was so interesting, watching how she flowed organically from one activity to another. But we did have lots of silly laughing time too.
So it all went well and I got some way overdue Mer and Maggie time. Gibson was staying with his darling Lenore and so Lily and Jason got to make the long drive to camp and back concentrating on the eldest son. 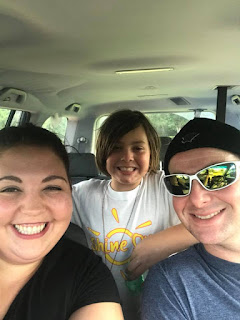 You think Lily was glad to get her big boy back?
When they got here to pick up Maggie, she didn't know who to hug first, her brother or her mama or her daddy. She didn't ask for her mama once while she was here but when she finally got to see her again, she was delighted.
And Owen reports that he had the VERY BEST TIME and he did everything from archery to fishing to swimming to...well, everything. Doesn't he look happy in that picture?
I asked him if he'd been glad to see his mom and dad though, and he said yes. But I don't think he spent any time crying in his pillow.

When their car pulled out of the driveway and I was all alone again, I will admit that it felt good. There is a reason that sixty-four year old women don't have babies, even if those babies are so very well-behaved. And of course I didn't do anything crazy like attempting a trip to the grocery store with my granddaughter. We just hung out in the AC and played with stuff.

Jessie and Vergil and August and Levon are home and I better get to see them tomorrow because they've been gone too long. When Jessie texted me on Sunday that they were coming home on Monday I said, "Good. Because I'm done being nice about it."
That's so mean.
Families have to share. It's in the contract. And the handbook.

Lord, don't I have a blessing-full of grandbabies?

And I think we will all sleep well tonight.