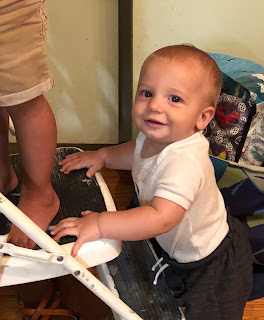 Last night when August got here and I opened the door for him and he burst through it I said, "August! I have missed you so much! How was your trip to North Carolina?"
"Pretty good," he said, which I knew he would.
His eyes were darting about everywhere and even as I kissed him I knew what he was looking for.
"Where Boppy?" he asked and then there was Boppy and August said, "What you doing? Watching TV?"
Mr. Moon allowed as how he had been and before I knew it, the two guys were squished up together, Big Boppy and Little Boppy, in Mr. Moon's chair and what was there to do but bring them chips and salsa? Vergil joined them and they all watched Coco together which I still haven't seen and I want to.

Levon seemed more interested in seeing me than his brother had been, grinning a big ol' four-toothed grin when he saw me. Lord but that child is growing fast. And who does he look like? He looks so familiar to me. Perhaps he simply looks like himself and that is that. He's a gorgeous boy and his passion for food is remarkable for someone who only had his first bite of it about a month ago. According to his mother, he eats everything he can get to his mouth and still wants to nurse all the time, too.

So dinner was fun and August finally began to pay a little more attention to his Mer when it came time to whip the cream. 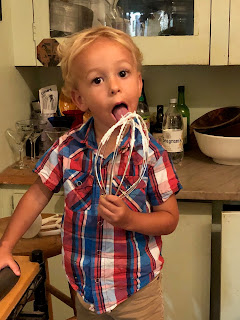 "Do I get a stool?" he asked when I told him he could help.
"Of course," I said. And he did.
Levon wanted to climb it too. 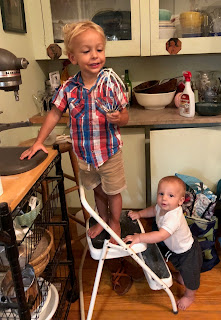 Beautiful boys.
Jessie told me that August is already asking questions like, "Does the wind come from trees?" and "Why do the clouds get pink?"
He'll be three at the end of September.
I have a feeling that the questions have just begun and I sort of wish Jessie could write down every one for me to take note of and record because the questions children ask are so often beautiful and profoundly mysterious and sometimes very, very funny.
Speaking of funny, I told August I would read him two books before they had to leave and we laid down on my bed and in one of the books, there was a daddy bear who was putting his son to bed.
"What he saying?" asked August.
"Uh, maybe he's saying 'night-night'," I said. "What do you think he's saying?"
And then August came forth with a deep daddy bear voice saying, "HA HA HA HA HA HA HA HA HA..."
and so on for about forty seconds.
Jessie and I almost lost it.
When I was changing his diaper and putting his pajamas on, he puffed out his tummy which he is very, very good at. It's a special skill.
"What's in that tummy?" I asked him, poking it gently with my finger.
"Brudders!" he said.
And we laughed and laughed.

Today has been a different day and one in which I woke up exhausted from a dream that I'd had where I was so tired I couldn't take my clothes off to try on different clothes at a Goodwill, nor could I pick up an iron I was considering buying.
Shall we call Dr. Freud? Oh, I don't think we need to.

I spent most of the day cleaning house because Lon and Lis are coming tomorrow and although I know without a doubt in this world that they would not care if I didn't lift a finger, there is a question which must be asked and that question is, "Have you no pride?"
Well, if you could see me right now, you would know that no, mostly I don't. But for goodness sake, there is a certain standard which even the most slovenly of us should aspire to and that would extend to a clean bathroom and clean sheets, etc. And when was the last time I mopped the kitchen?
Who knows? Not me.

So I did those things and trust me- there is still enough dirt and dust in this house to start a preschool play yard but it's a little better.

But here's a thing that happened which had absolutely nothing to do with cleaning:

I went into my bathroom to pee as one does and I already had my overall straps unhitched when I noticed that the big "curtain" in my bathroom which is a small Kantha quilt, had fallen and thus, if I did pee I would be potentially doing it in front of the entire population of Lloyd, so I decided that I would put the quilt back up. I had to get in the tub which sits right in front of the window and I did get the cloth back where it was supposed to be and as I turned to step out of the tub, I somehow got the toenail on the big toe of my right foot caught in the overall hardware hanging from the unhitched strap and quickly realized that I was on my way to a possibly deadly fall over the edge of the clawfoot tub onto the ceramic tile and in a desperate attempt to free my foot and leg from my now-murderous overall strap I almost pulled my toenail off but that's okay because I did not fall and am still alive.
But I gotta tell you- that shit hurts!
And now my toenail is bleeding and if I hit it on anything I'm going to scream like a hyena.

How absurd is that story? It's like something from a James Thurber story (does anyone know who James Thurber is anymore?) only not nearly as funny.

And I've also been slightly mean to my husband for no reason except that I'm feeling pissy.

However, tomorrow our beloved friends will be arriving and they are playing in Tallahassee so I will actually go out of an evening and on Saturday we'll all be traveling over to Apalachicola to celebrate birthdays, anniversaries, Christmas and life in general. We'll be staying at the Gibson, playing cards on the porch, drinking fancy drinks, eating out at wonderful restaurants, and just flat-out having fun.
And I need all of that more than words can say.

I'm going to go roast a chicken now to make sure my husband knows I love him.
Mashed potatoes may be involved.

Be careful out there and remember, more deaths occur in the home than anywhere else.
I am grateful that one of them did not happen here today.
I must remember, however, that the night is still young.