They Were Lost But Now They're Found, Also, Holy Hell! What Happened In Helsinki Today?! 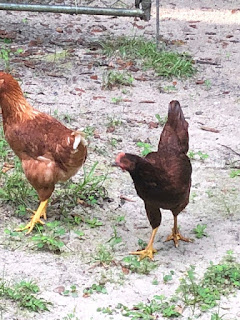 Terrible picture and I apologize to Miss Dixie for cutting her head off but I took it on the fly this morning. Those two hens did not show up last night in the hen house and I was pretty darn depressed. But I always say the same thing which is, "Well, let's see what we see in the morning," and what I saw this morning around 9:30 was Dixie and Nicey scratching out in front of the hen house looking absolutely fit and fine.
I was so relieved.
I went out to see them and they ran up to me as if they were starving and also, as if to say, "Hey! Where you been?"
Excuse me? I wanted to ask them where they'd been, where they'd spent the night, and why they didn't come home to roost.
Maybe they're having some sort of kerfluffle with some of the other hens. Who knows?
Not me.

So. Been quite a day, huh?
Think this will be the end of Trump?
I mean, he stopped just short of pinning a huge sign to the front of his huge jacket saying, "Yes, there is a pee tape and yes, I owe the Russians millions of dollars and yes, I am guilty as sin of everything I've been accused of and yes, I've sucked Vlad's dick and yes, I liked it."

No collusion. The Hillary e-mails. Her server. Etc., etc., etc.
Doesn't believe what every investigative branch of the US government has uncovered but believes Putin.
Yeah. Treason.
What. A. Dick.
Who basically has the fate of the world in his hands but hey! Don't worry! He talks to Sean Hannity an hour a day and with an advisor like that, all will be well. There, there. Don't worry. All will be well.

I like how he kept checking his notes to be sure of the wording of what he needed to say which is so absolutely not Donald Trump's usual style of bluster and blathering moronic off-the-cuff word salads although there were some of those too. I thought he didn't need no stinking notes.
He looked mighty nervous, too, didn't he?

Well, anyway. Let us see where the fall-out leaves us.

I myself took a walk that just about killed me. It's so hot and humid that you can't believe it. Anyway, I did it, la-di-dah, and now I'm walking like a ten thousand year old woman.

The only other thing I did outside today was to clean out the poopy hay and replace it with fresh in the hen house.

I did a lot of ironing while watching Queer Eye on Netflix which made me cry so much at certain points that I'm surprised I didn't try to iron my arm instead of the shirts I was working on. I certainly have enough wrinkles on my arm to justify a good pressing.

And I guess that's the news from Lloyd although I did find an imagine online of what I imagine August's small car to look like. 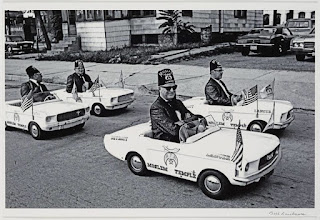 That's it! Exactly! Only without the flags, probably. Since it's just a funny cartoon image in my head I am allowed to imagine the small boy driving down Tennessee Street in Tallahassee with giant trucks and SUV's all around him, beeping the small horn in his small car to alert others to get out of his way because he's on a mission to get to Lloyd! Before his diaper needs changing!

I sure hope that Dixie and Nicey roost at home tonight. Maybe they were just very, very unhappy with the unsanitary nature of their roost boxes and will be so delighted with the fresh hay that they'll settle in safely with their sisters. And, uh, brothers.
I heard a teen crow for sure this afternoon but when I went to look to see who could have done it, Apricot and Ringo were standing right next to each other and no one was talking. I think that if Apricot is a rooster (and I'm pretty sure he is) I might rename him Liberace because of all those blond feathers. And let me just say that if he IS a rooster, it would help tremendously if he was as gay as Liberace because Mick would probably leave him alone. But would he leave Mick alone? Or Ringo? That might just be trading one problem for a whole different set of them. But the hens could get some fabulous grooming tips and that's always a good thing.

Again. We shall see.