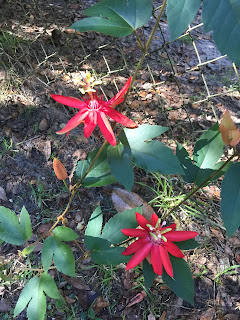 The red passion flower is still blooming and although the vines are definitely not covered with flowers, I've had more this year than in all the years before. It will probably bloom until our first freeze. If we have one. I have to tell you that I've actually complained a teeny-tiny bit about it being so chilly in the past few days.
I know. I KNOW!
I am an ungrateful wretch and a wimp to boot but y'all- it's 56 degrees in my hallway right now! For us Floridians, that's like where's-the-igloo? weather. And it's supposed to get down to 39 degrees Sunday night so you can just mark it on your calendar that I'll be whining like a little bitch when that happens. I've already gotten out the duck (which for those of you who do not know, is my down comforter) and used it for the past few nights. Of course I still keep my window open and have two fans blowing on me. I love being cozy under the duck and the cooler air and the fans enhance that experience.
I've also had to wear slippers and I hate that but at least I do have slippers and I should not complain although that's never stopped me.

I've been thinking a whole lot about the whole Harvey Weinstein thing and I have a lot to say about it and the fall-out and what so much of that says about us, about our culture, about the relationship between power and abuse and how it just might possibly change the whole world if suddenly women realized the power that we ourselves have based on speaking the truth of what has been done to us and exactly who did it and exactly who enabled it.

But that's just all too much for me tonight. 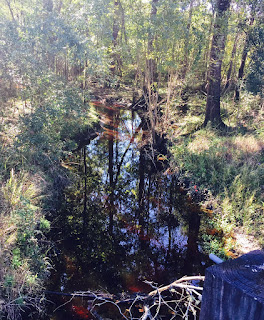 That's a picture of Still Creek, a tiny little rivulet that I walked by this morning. It soothed my soul which has been roiling for days.
And years.
And a lifetime.

Let us gather again tomorrow and talk about things.