More Than I Can Say

My MacBook cranked right up this morning with no problems and I can't tell you how grateful I am for that. I was met with sadness though when I opened the door of the hen house and let the chickens out. There was a pile of feathers and Miss Owl, I think, was missing. It's always been hard for me to ID Owl and Lucy unless they are together for comparison but I think it was Owl. Lucy has been looking around all day and I can tell she is off. I got no egg from her and I saw her inspect the pile of feathers.
Hawk? Owl?
Most likely one of the two. An aerial attack, a quick claw-snatch and flap of strong wings.

It's quiet this evening after a fairly busy day. I met up with Lily and her children and Jessie and her child at Costco and it was chaos, as it always is when all of the cousins are involved. Owen even said that August was way more energized than he'd ever seen him. Gibson brought a piece of paper and a pencil and he was writing tickets. I'm not sure what for, but he didn't write me one.
Phew! 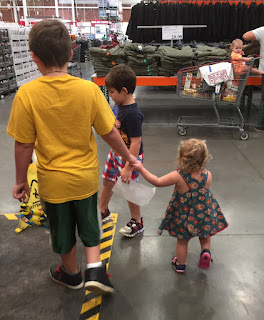 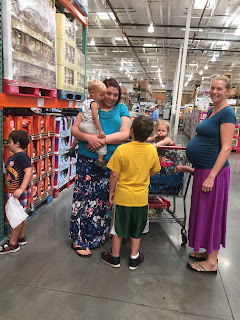 We were too early for samples and the children were bitterly disappointed. Owen insisted that he was about to die of hunger. Maggie and August were given some of my cherry tomatoes which they love and a few blackberries and they were happy and did not starve. Actually, Maggie is eating an entire Babybel cheese in one go in that picture.

After Costco we headed over to our regular eating establishment, El Patron, where we sat outside and it wasn't bad in the shade. There was a nice breeze and they always bring us lots and lots and lots of chips and salsa and bring Hank a giant tankard of his beverage of choice and we tip them like we've all been food servers before (which we have) and even Mr. Moon showed up to join us. 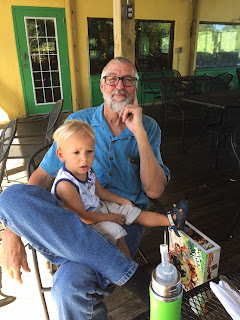 August took his accustomed seat on his Boppy's lap where he is most content. 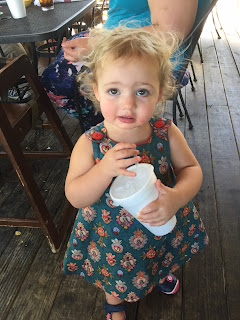 Magnolia entertained herself by walking around and visiting everyone. 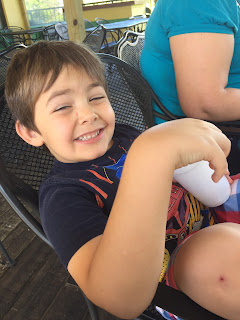 Gibson was his Gibson self and told us more jokes and kept a record of our behavior on his ticket sheet. 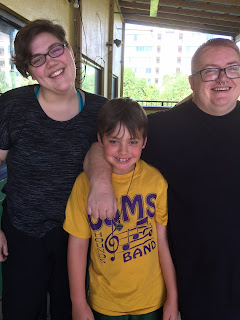 And Owen did not die of hunger but posed with his Uncle Hank and our Rachel.

Here are Jessie and her beautiful belly-full-of-baby and August and Lily and Maggie. 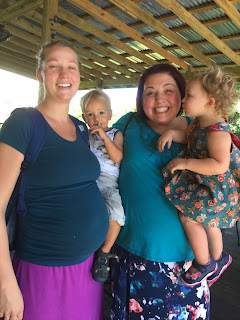 Can you see Maggie getting puckered up?
And...she makes her move! 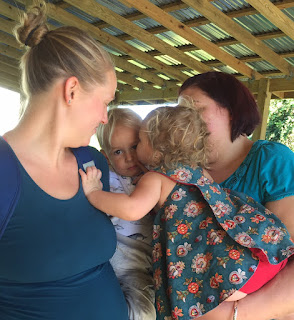 August, as usual, appears to barely tolerate such mushy stuff.

And all of that was the exciting part of my day. After lunch I went to Joanne's Fabrics and bought blanket binding for King Richard's quilt and then I went to Publix. Mr. Moon has driven to Georgia to the hunting camp and so I am alone again, but not upset about it at all. I can and will work on the quilt and whatever I want tomorrow at my own pace with no one's schedule to adhere to but my own.

I just closed up the hen house and found Joe Cocker on a tiny ledge with three hens. Camellia, Dottie, and Violet are all snuggled up to and underneath him despite the fact that there is a whole lot of empty real estate to bed down in. Dearie is up in the tree along with Nicey and it seems to me that Dora is displaying some broody behavior, sitting flat in the same exact position she was in on a nest hours ago when I checked for eggs but that makes no sense whatsoever. This is not the season for hens to hatch eggs.
Unless of course, the global climate changes have affected the eons-old internal timepiece of my hen.

I discount nothing these days which appears too unbelievable to even contemplate. Since Trump got elected every day of his reign seems to bring another act or quote of his which shatters what I thought even possible from him. I comfort myself by thinking at random times during the day and night that perhaps at this moment, he is being arrested for treason or some other high crime which surpasses even his own party to ignore but I am beginning to think that no such crime exists for these soulless people of privilege, these heartless people from hell.

All we can do right now is to absolutely not lose sight of that which is true, that which is real, that which is correct, that which is loving, that which is right, that which is sane, and to not accept any of these perverted things which are coming from the now-defiled office of the president but to speak up against them and to remember that history will not be kind to these people although this is rather cold comfort while we are in the middle of it all.