I Just Want To Talk About Chickens, Okay?

I don't want to talk about it. Talk is cheap and like you, I'm sure, I feel helpless in the face of it all. Or maybe you don't. Maybe you feel so angry that you're ready to do something about guns but like one thing I saw today said- when we accepted the slaughter of the children at Sandy Hook we gave up any pretense of trying to control the sale and distribution of guns and ammo.
Or something like that.
You know what I mean.

Let's talk some more about chickens. Endlessly fascinating subject and real and right as rain.
I heard a teenager crow today. A scratchy, tenor first attempt at a crow. Not Mick and not Joe Cocker or Dearie either. Had to be either Rose or Pearl and sure enough, those were the only two birds out in the kitchen bed where the sound had come from.
I think it was Rose, the little banty offspring of Mick and Violet's although I see no comb or even wattle. Still, it almost had to be. 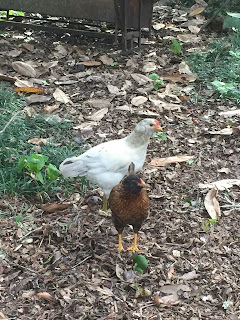 I could be so wrong. Some young'un was crowing though and they're the only two.

Poor Camellia is going through her complete molt again. All of the chickens do it to some extent, though in the young ones it is hardly noticeable. Last year Camellia lost almost every feather on her body and looked ready for the pot and I felt so bad for her and she's doing it again this year. Feathers line her sleeping nest and she is already showing naked patches. 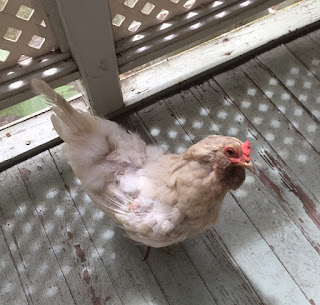 After laying regularly all spring and summer, she has paused in her production. That last egg I got from her was a few days ago and it was a jelly-egg, the shell soft and wobbly. Bless her old heart. I don't know how old she is but she was Kathleen's so she has some years on her. When she comes on to the porch I can't help but giver her some cat food which she runs to peck at. She is such a sweet old girl.

My next door neighbor called to me from her back yard a little while ago when I was outside. She was filling up her chickens' water containers and she wanted to tell me about the twenty new pullets she just got. Then she wanted to discuss Dearie who lives over at her house during the daytime, sneaking off to the back pasture with some of her hens. Also Jack whom she not only feeds canned cat food but also brushes which she claims he loves. I don't know why he doesn't just move in with her. Probably because she has about twenty dogs.

And I guess that's all I have to say tonight. It serves no purpose whatsoever to discuss chickens except that for me they are a reminder of that which is good and grounded, no evil involved.

And let me say that I just sneaked another peek at FB and it would appear that Tom Petty is still alive but not expected to live.

I guess that could be said about all of us in terms of the long run.

Let's live until we can't.