Remember What The Doctor Said 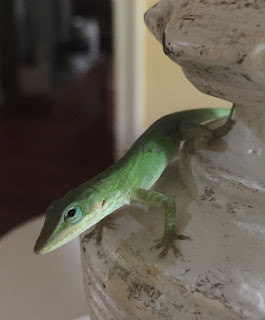 I slept so hard last night that when I got up this morning my pillows were hardly disturbed and my sheets and blankets needed nothing more than a slight tug at the top to make the bed look relatively made. I don't think I even moved. And this morning I was just hanging out here at the house with my little buddy, the Anole, when I got a phone call from Jessie. She had already texted to see if she and August could come hang out while Vergil did some deer processing and of course I'd said yes and on the phone she asked if maybe I could watch the boy while she went to Costco and Publix, and again, of course I said yes.

August had wanted his mama to give him kitty cat whiskers and so she had painted some on him and also, a cute little kitty cat nose on his own cute little boy nose and the first thing he asked when I opened the car door was, "Chickens go?"
He loves those chickens.
After Jessie and I had visited for a little while, she took off all by herself, except of course for her intrauterine baby, and August and I settled in for some good times. We read a lot of books, including this one which has been one of all of my grandchildren's favorites. 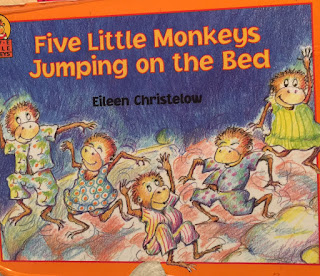 August loves it too and we talk about all of the pictures and the story as we read the book and he wanted me to read it twice, and so I did. 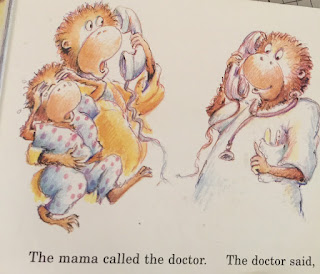 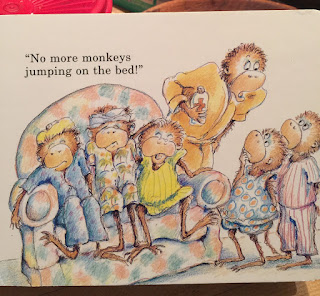 After books we went on to porch playing 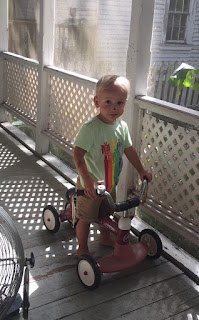 and playing with the toys in the Glen Den where not only are animal heads and mounted fish kept on the walls, but where there are also enough children's toys to start a preschool.
Every man's dream of a man cave, right?
We played with Lincoln logs and the Fisher Price farm and some little bunnies and mice that have houses and furniture and clothes. What he wanted though, was the phone from the big laundry basket where many of the toys live. He knew it was there but he was having a hard time reaching it. I got it out for him and he played with it for a little while and then we went into the guest room where there are more books and we read a few of those and I changed his diaper and then I offered him the old real phone that I keep for when the electricity goes out. 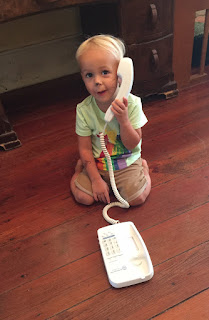 Which he loved.
And then I realized he was saying something over and over and I really started paying attention.
This is what he did.


Do you hear what he's saying?

Obviously a genius.
He had the right phone and he knew what to say on it.

So that was fun and he was completely happy except when I started a load of clothes in the washer and he freaked out and I have no idea why (it's a front loader) and he made me stop it and then open it and he took the clothes out and put them, sopping, into the laundry basket.
Was he afraid the clothes were being hurt? I have no idea but he did NOT like that washer at all.
He got over that quickly though and then we had some tomatoes and pickled okra and mac cheese, as he calls it, and then mama came back and we ended up reading one more book before he left, all three of us cuddled on the bed, and then Jessie took her little kitty cat home and I've spent most of the rest of the day embroidering and have made so little progress that it's ridiculous but I had a good time anyway, watching Frankie and Grace and I have to admit that my affection for Jane Fonda has grown considerably and can I just say that DAMN! Sam Elliot!
I feel I need say no more about that.

And now the sun has set in a fiery rose-lit glory and the chickens have made an unusually quiet retreat into the hen house.

I sure am feeling fortunate about this day, this life.

Try not to jump on the bed. 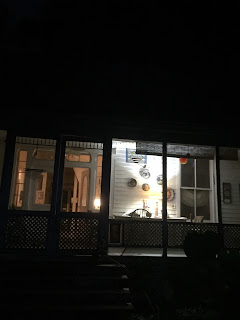