Is It The Full Moon? 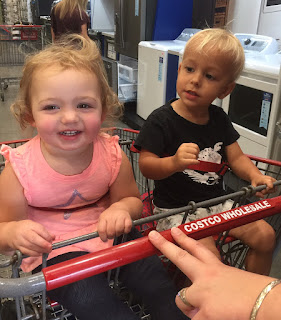 The youngest cousins accompanied us to Costco today and sampled everything from pizza to pork chops to peaches. They are starting to really pay more attention to each other, especially when it comes to who has what and who is being allowed to do what. It's amazing how early the it's-not-fair sense kicks in.

It was good to get out of the house I guess, although I am sure I was lousy company. I woke up feeling as if the world must surely be done with me and that I am nothing but an annoying, busy-body old lady who really has nothing to offer anyone and please don't bother to tell me this is not true because that's just the way I felt and still do, actually, plus I had a lot of anger mixed in there and I'm not sure at all where that came from.
So this afternoon when Maurice and Jack were about to get into it and I made the incredibly stupid mistake of reaching out to stop Maurice from leaping on Jack and she bit me so hard that I'm sure I have a bruise under the bandaid as well as a bloody hole or two, I was so mad I could have thrown her across the porch. Of course I did not, but I will admit that I threw an apron at her and screamed at her.
Goddam, it HURT!
I know she didn't mean to hurt me. I know that. But honestly, how long have we had this cat? And I have shown her nothing but love and affection, all on her terms, never forcing the issue but waiting for her to come to me, feeding her the trailer trash treats she loves, never over-reacting in the least when she's bit or clawed me.

May I just say- it's not fair?

I still love her but I'm fucking keeping my distance and you can bet on that.
I understand that we not only anthropomorphize our cats in believing that they do very much care for us and have deep affection for us but we also probably rationalize their bad behavior in the same way.
"Oh, it's not her fault. She had a traumatic childhood."
How often have I said that?
And honestly, I know nothing about her childhood. She never has shown any fear of humans (or anything, for that matter) so I don't think she was treated roughly as a kitten. For all I know she was a beloved pet until she started displaying the clawing and biting and was then abandoned in front of my house where she has been ever since.
Well, don't worry. I will get over my snit before the puncture wounds are healed.
What's one more wound anyway? I have a veritable railroad track of rose thorn wounds down my leg, ant bites on my arms, and a scrape on my hand which I have no idea how I got. Sometimes I look at beautiful older women who are done up nicely in one way or another and I feel ashamed that I don't even make an effort. There's a woman about my age I see at Costco who has short blue hair and tattoos and she wears awesome clothes and I want to be her. And then I see a lady with pretty hair, fixed up in an attractive way, not screwed up in a stupid Olive Oyl bun and stuck to her head with a hair tie, wearing make-up and tasteful jewelry and clothes that don't look like she slept in them and I want to be her.
I don't know. But here I am, liver and age-spotted as a leopard, scarred and gouged and bit and wrinkled, crooked and bent and wattled and I just feel as if I've given up and wonder why in the world my husband stays with me or why my grandchildren don't scream with fear when they see me.

I got a good long row of mesclun planted along with a row of collards (two kinds) and a row of arugula and that was all I could manage to do this afternoon. It doesn't look like Tropical Storm or Hurricane Nate will be much of a threat to us (although hey! who knows?) but we should be getting some good rain which I will be grateful for. Somehow I am at a point in my life where there's almost nothing which soothes and quiets my soul like good, steady rain, especially if it's falling on a just-planted garden although watching it fall on any green growing thing feels like a promise of hope.

I will hold to that thought and I offer it to you as well.