This morning was fucking hard. I had the shaky anxiety, the stomach in nautical knots anxiety, the flaming anxiety and all of that was accompanied by the I-ain't-never-done-nothing-right-in-my-life depression.
Such a lovely bouquet of emotions for a fine fall morning.
Then I went to let the chickens out and dammit all to Jesus hell, little Rose had been murdered in the coop, her head pulled through the wire probably by a possum, leaving behind a small and feathered body.
I say possum because when Mr. Moon went to shut all the chickens up last night he saw one out near the coop.
I just cried.

But you know, life goes on despite anxiety, depression and dead hens, and Rachel texted and asked if I'd like to go to lunch with her and Hank and she'd text everyone else to see if they wanted to go and so after I got the sheets on the line and some other chores done around here, I went to town and met everyone. August was wearing his overalls and Jessie told me that when she brought them out this morning he said, "Like MerMer!" and he gladly put them on. When I saw him I said, "What are you wearing? Overalls like MerMer's?" and he said, "MerMer overalls go? Home?"
"Yes," I told him, "My overalls are at home."
I wish I looked half as cute in mine as August does in his.
Maggie hugged me to pieces and patted me as she does, with me patting her back 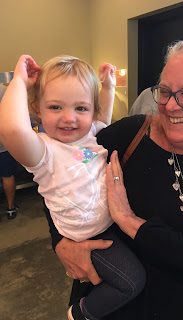 and we all ate delicious mostly Asian food although fried plantains were on the buffet right along with the curries and Mongolian tofu and I swear one of the best dishes today had chayote in it. One time they had tamales and we have determined that there are probably some folks from Mexico who work in the kitchen and doubtless, that is true. As Anthony Bourdain says, if every Mexican in the US suddenly disappeared, there would be no more restaurants.
Anyway, it was just perfect to see my kids and laugh and enjoy delicious multi-ethnic foods. Both babies had ice cream cones and wanted more so Hank came up with a healthier solution which was to stick chopsticks into watermelon chunks. Maggie wasn't having it but August thought it was awesome. 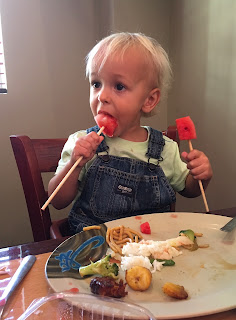 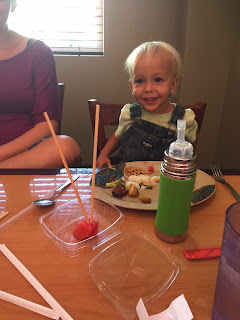 Maggie simply walked over to the refrigerated dessert case, opened it up and snatched Hershey's kisses out of it. Because she's Maggie and that's how she does it.

After lunch we hung out in front of the nursery next door, checking out the fountains. 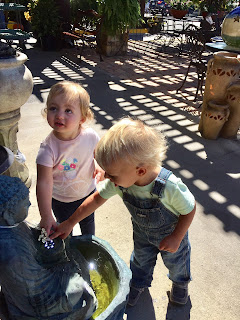 If you put your finger on the place where the water comes out it sprays everywhere which is wonderful! 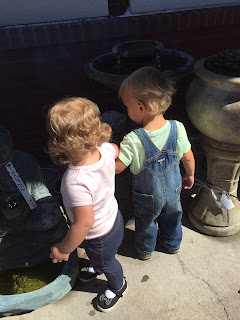 Look at those cute baby butts! Maggie actually tried to take her clothes off so that she could get in the water. Her cute little baby butt was exposed for a second or two as she almost succeeded.
In a perfect world, she would have been allowed to strip nekkid and get in that fountain but we do not live in a perfect world.
But I will say that baby butts ARE perfect and that's just the truth.

So. Here we are. Friday night. I'm making a cauliflower gratin and a roast chicken (not Rose because I'm a big fat hypocrite) and martinis are involved.

I hope everyone's having a decent Friday and that your weekend goes well. Mine will go better in that our heater which WAS NOT WORKING (are you surprised?) has been fixed and also, the gas guy came and made a delivery so that when it gets down to patchy frost temps on Monday morning, we won't die.
The folks at the church next door are belting out the worship and I can hear cats fighting somewhere in the darkness. I hope that Maurice isn't one of them. Her face is already torn up once again.
She is a warrior, not a lover.
But I love her and she can just deal with that. And she hasn't drawn my blood in maybe a week.
Progress!