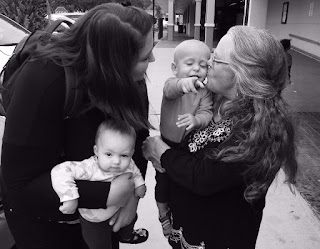 I had the fullest day. I wanted to cram it completely full to block out everything that was troublesome, worrisome, horrendous and hard. I couldn't sleep very well last night. I would drift down about one millimeter below the line of consciousness and then immediately and suddenly find myself above it again, back wide awake. I did this over and over and over again and so I wanted to wear myself out today and I guess I did.
I'm exhausted now.
I went to Lily's and picked her and Owen and Maggie up. Owen got his head wired yesterday for the EEG study and we had to take him back to get unwired. The neurologist's office is in the "professional building" which aligns with the hospital and shares parking with it and since Maggie was asleep, I dropped off Owen and his mama and Maggie and I parked on the top deck of the parking garage with the sky above us and we waited to hear from Lily so that we could drive back through the levels and layers of garage to pick them up again, which we did. Owen's hair was fierce from the glue they'd used and he was a little wild with it all. I have no idea what's going on in his head and I mean that in all ways. They will have results next week and we shall see where we go from here. I have a feeling that we'll be going down to Shands, the teaching hospital in Gainesville where they have a good clinic for epilepsy and we don't even know if it's epilepsy but I think they will be able to help us find answers.
Meanwhile, the boy is fine in all other ways. He is suddenly reading and being able to spell words and he just spontaneously does that, and it's such a beautiful thing to see. I think he is amazed at the way this is happening, as if by a sort of magic.
So. Next we went to a local park where Gibson was playing with his cousin, the darling Lenore. He spent the night at his other grandma's last night and they went to the fair. Owen, with his wired head could not go but he seemed to be okay with that because they had a family night at home with his mama and daddy and little sister and they watched some movie that he wanted to see but Gibson had obviously ridden his share of rides and had his share of fun because he had almost a complete break-down over the fact that he'd forgotten the Mountain Dew that his grandma had promised him at her house but he got over it and they had brought Owen a bag of cotton candy and oh- the sugar, the wildness, the boys.
Owen wanted to go to Japanica and so of course we did. Jessie and August met us and we had our usuals- our miso soup, our salads with ginger dressing, our sushi and bento boxes. Owen had two bowls of soup, two salads and a lot of sushi. So did Gibson. Maggie ate everything her mama would give her and August did the same and probably had more of his mother's salmon than she did and I gladly let him have my spring roll and Maggie some of my rice. Maggie loves to say, "Uh-oh" and she loves to drop things on purpose so that she has a reason to say it. August loves to sign for "more" and is frantic with it. "More, more, more!"
And of course, we checked out the most comfy couch in the world because that is what we do at Japanica. 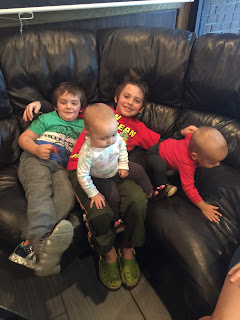 Four puppies and you can't pose them at all.

Afterwards we went to the Goodwill bookstore and books were bought and some games, too. I even bought myself a copy of "Terms of Endearment" because I only seem to be able to reread books of Larry McMurtry's now and that's fine. It's okay. Who cares? Comfort is where you find it and I find it in the plain talk and beautiful dialog of McMurtry's people. It's like visiting with old friends who expect nothing of me. Nothing at all.

And after THAT, Lily and the kids and I went to meet Jason at a new grocery store over by the FSU campus which was having a grand opening. Rather ridiculous but hey! It was something to do. It's one of those faux healthy grocery stores and Lily did pick up some very good deals on organic vegetables and fruits. The loss-leaders, as you will, and I walked around in shock, so many people and so much stuff. Some of it was ridiculous- the make-your-own-trail-mix bar which which was nothing more than big vats of candy and dried fruit and nuts. Mostly candy. Samples of everything from gluten-free cookies made with all of the trendy hot ingredients to bacon. BACON! Owen wanted the bacon. And there was cheese and wine and beer and I looked around at one point to see people of every age and every color and size and form and shape and here we all were, simply gathered in one place to see what sort of food and drink this new place was bringing us, just human beings hoping for a free taste of this or a good deal on that and I teared up bad because all day I've been checking the news about who DT is calling together to act as his advisors, his cabinet, and it is so bad.
How can THOSE white men represent us?
Well. They can't and that is the answer and I don't feel like talking about any of it right now.

I kissed my babies and my daughter and my son-in-law good-bye and they all went home in Jason's car and I came home in mine, actually stopping at Publix if you can believe it. I was numb, it didn't matter, but I needed things like shower spray and fuck if I'm going to buy all natural shower spray that doesn't work for too much money and I needed toilet paper and wasn't interested in buying wheat straw toilet paper although I'm sure it's awesome and will save the planet but I just got what was on sale at Publix. I talked to my friend who is recovering from breast cancer treatment and I found a little pink shoe on the floor and delivered it to the mother of the little girl who had lost it and I bought a damn chicken to roast because...comfort.

And here I am. Dishes and clean clothes put away. My own chickens put up for the night. Do you realize that I am feeding twelve chickens and am only reliably getting one 3/4 size egg every other day? Perhaps I need to worm them.
I'll think about that tomorrow.
Tomorrow.
Will I get back in the garden? Why not? Will I spend all day in bed reading? Ah, probably not. I could go to the festival that Hank has practically killed himself planning for the last two months. I don't know.

I walk through my house, one room leading to a next, this house which was built before the Civil War, another time in our history when it must have seemed as if The Great Experiment had completely failed and it should give me comfort because it still stands and offers me protection and a sense of safety but it really doesn't. This house may survive and stand through that which is upon us but I am not sure I will.
My soul feels too crushed to hold up to the forces of that which press upon us all.
They are singing at the church next door and I do not know if they are singing hymns of faith or of hope or of despair. It really doesn't seem to matter to me at all.

I hope I feel differently tomorrow.