This World, These Worlds, This Love 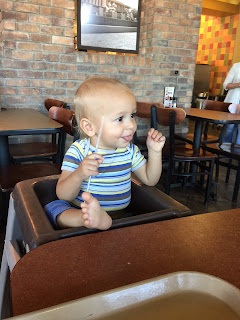 Now that's how to eat lunch, y'all. Laid back and plenty relaxed. Put your feet up, make a goofy face. Pretend to offer your cousin a cracker and then take it back and laugh. Oh, August.
It's so funny how he and Maggie are both on about the same track when it comes to walking. They're both toddling around like the little drunk monkeys they are. August is a little more skillful but then again, he's three months older. Maggie has the advantages of (a) being female, and (b) having siblings to teach her how to walk. 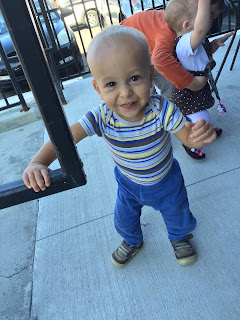 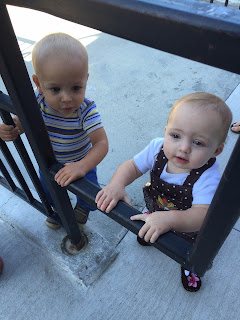 Such sweet babies.
"Just stay the way you are," I tell them, and they won't. They can't. But oh, what a sweet age. Maggie babbles and babbles her sentences and we pretend to translate them. She says "Uh-oh" and "ouch" very clearly. She says ouch when she tries to pull your face off. 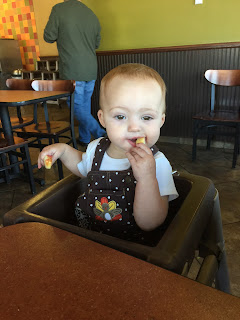 Do not let those dainty looks fool you. This is a tough little woman baby. Do you remember when she was born and Lily said, "She doesn't have any eyebrows!" and Jason said, "She'll get one."
She's working on it.
My little Frida beauty.

We had a good time at lunch. There was another baby behind us, younger than our babies, and Gibson made her laugh and he said, "I love babies. When I'm around babies I just go crazy!" And he does. He is the sweetest boy, that Gibson. He's pure honey and sweet cane syrup. When we went to get hair cuts, he said to me, "Oh Mer. Don't cut your hair. It is beautiful." 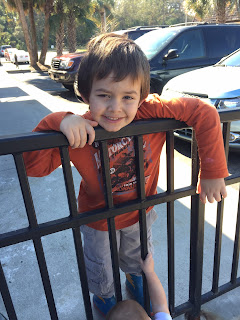 After lunch we went to Costco and got things for Thanksgiving. Pimento cheese for sure.
"Jalapeno or regular?" I asked, reaching for the container.
"Jalapeno," said Jessie.
"Yeah, the kids don't like it anyway," said Lily.
"Thank god. More for me," said Jessie. And we giggled like Betty Rubble and Wilma Flintstone.

After Costco, Lily and Maggie and Gibson and I made a mad dash back to her house to put all of the cold things in her refrigerator and then raced back down the road to pick up Owen from the bus and then we drove back into town for the haircuts with our dear, beloved Melissa or "Miss Lissa" as Gibson calls her.

Miss Lissa is a genius haircutter and when Owen said he wanted to be able to do a Mohawk AND keep his rat tail, she figured it out. 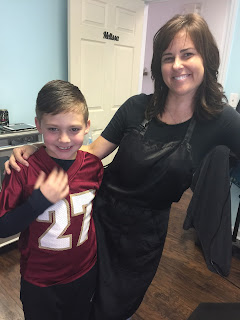 Believe it or not, he can do a Mohawk with that cut.
And here's the rat tail, which is so proud of. Because...well, who knows? 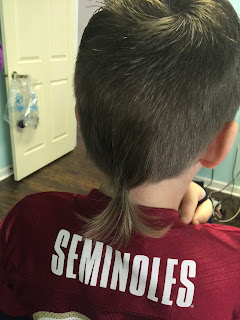 Lettin' his freak flag fly, I suppose. Seven years old and I'm already starting to see symptoms of teenagedhood and it's scary and wonderful and I love that boy so much. He got his progress report today- all A's. 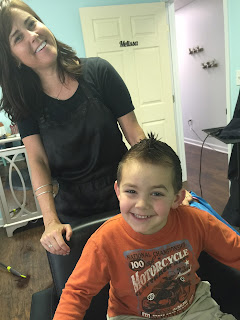 He also wanted a Mohawk and also has a rat tail because his beloved big brother has them.

Lily got her hair cut too and it is beautiful but I didn't get a picture. I love it. Melissa always knows just what you want and how to do it whether you're a four-year old boy or his mother.

We finally got so tired of trying to keep Maggie out of the hair that we just let her get into it and this is what she did. 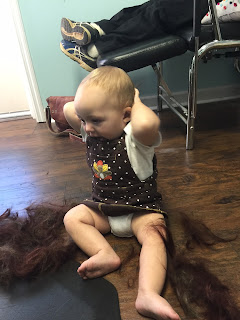 You can't really tell but she's trying to put the cut hair on her own head.
Ten months old and she did this repeatedly. Attempted to attach her brothers' and mother's hair to her own little head where she's just starting to grow her own.

My grandchildren are geniuses.

So after all of that we went to Publix and finally, at around six I got home to Lloyd and unloaded the car and put everything away and went and shut my chickens up, all twelve safe and roosted.

All day long I've been thinking about Cozumel and how yes, we are actually going to be there in a little over a month, me and my man. That this will be what we see. 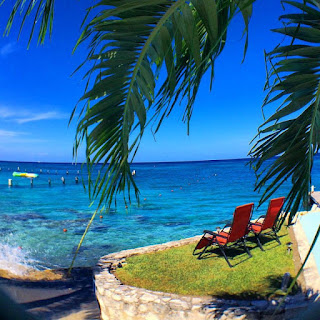 Every damn time I've ever visited, I've threatened to just stay. To send Mr. Moon home to tie up loose ends and sell everything and I'll find a place for us to live. If the children want to move too, we'll just find a damn compound somewhere in town. I told Lily today that this might be the visit where it actually happens. She said that she and Jason had discussed this and decided that if we wanted to do that, they'd sell everything and move down and start over too.
Because you know- here I am, still as tied to my children as I ever was with the added inescapable gravitational pull of my grandchildren and I can't live that far away but dear god- if ever there was a time to flee, to go and live in a place where the water looks like this and the Mayans are so kind and it's so far away from what's going on here right now (which I cannot bear to talk about tonight- I just can't) then this would be it.
A dream, a dream, an unrealistic dream.
But what makes a dream reality?
Simply choosing to choose it, I suppose.

Well, for tonight I am simply going to think about the two weeks we'll be there which will pass like a dream, I know, because the time always does. A dream of that color of water, of a completely different world a few inches below the surface of it, of smiling faces, of soft air, of the smell of grilling garlic, and jungle and tiny ruins and sunning iguanas and watching the boats come and go, watching the sun set over the water, turning it every shade of rose and gold, of playing cards with my husband and laying in bed and reading books and listening to the sharp, liquid song of the birds, and going to see our old friend Rogellio to see what crazy trouble he's gotten into recently and eating the freshest seafood, the sopa de lima, the Yucatan style pork, walking in the square at night and standing in line for elote, flirting with the children, window-shopping the silver, all of it, all of it...just being.

I remember when we first visited the island, almost thirty years ago and the only televisions were at the sports bar and they were all tuned to sports and the only newspapers were in Spanish and of course there was no internet and we truly could drop out of it all simply by arriving and staying, feeling as if we had escaped the very bounds of what we call reality but which, in fact, was exactly the reality I wanted to inhabit. Well, those days are gone and I'm sure we will get into discussions about that stuff with the people who live there and with tourists and I don't want to talk about any of it but we can avoid them if we try.

And I am going to try.

Lucky me. Grandmother of these beautiful babies, mother of my beautiful children, wife of my good husband, fortunate enough to escape the bounds of it all for a little while and to remember that civilizations come and they go but that babies are always beautiful and that there are places on this earth, for now at least, where we can breathe and sleep and dream of myths and legends and silver darting fishes and water as clear as gin, as blue as nothing you've ever seen before, and still, thirty years on, walk down the sidewalks holding hands with your love murmuring, "Buenos noches, buenos noches, buenos noches," and that is all that needs to be said.