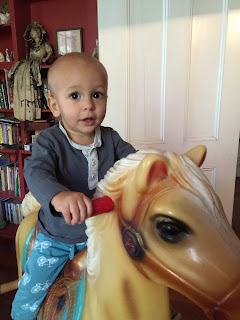 The good old bouncy horse that Mr. Moon and I bought in an antique store in Thomasville, Georgia when Owen was a baby was ridden by its third cowboy in our house today. He liked it, that August child. It was a fun day with babies toddling around and eating crackers and apples and dropping crackers and apples so that the other one could pick them up and eat them.
Gibson wanted to play games on my tablet, and did, and Owen wanted to hang with Boppy and they did, doing target practice with the BB gun. Owen ate kale from the garden and then he and Boppy got dressed in their camo and went to sit in the deer blind at our friend's house.
They've just come in and although they did not see one deer, they had a good time hanging out. I just told Owen, "You know, when you were born, this is what your Boppy was dreaming of. Taking his grandboy hunting."
"She's right again," said Mr. Moon.
"Boy, Mer, you know a lot of stories," said Owen. We had just discussed the story of the time I found a snake in my kitchen and had to call the very same friend whose land they were just hunting on to come and get him because Mr. Moon was out of town. I am not exactly afraid of snakes but I do not like to handle them and although there is part of me which would like having a pet oak snake in the house to eat vermin, there is another part of me which knows I would die if I reached for a plate to serve supper on and found a snake on it. Which is why I had to call our friend to come and get it while I still knew where it was which was behind the microwave.
Stories. Yes. I have a million.

So anyway, it was such a nice day that we took the babies and Gibson out back and spread a quilt for the babies to play on 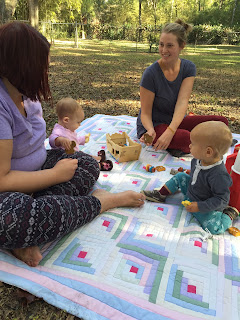 which they did for about five seconds before they began toddling over to the play set where they tried to do completely inappropriate things like climb the slide and August did climb the ladder up to the platform with his mama standing right behind him. That child is a climber. 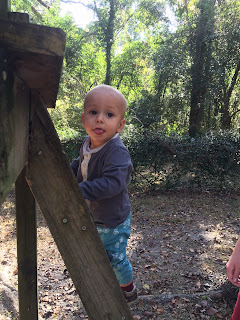 Gibson begged for me to swing him and so I did. "Higher! Higher!" he commands and demands.
I do my best.

Jessie and August did a little swinging too although August didn't quite get the concept. 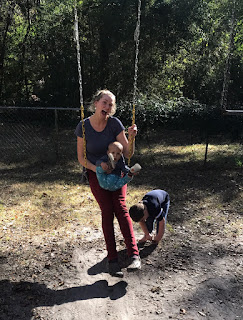 But he giggled and tried to eat his shoe and we finally came inside and Gibson and I played one round of faux Monopoly and there was more snacking and cracker cracking and I went out and picked salad greens for Lily and I gave Jessie some of our soup from last night. I always seem to want to send my children home with food. At some point, both of the mamas decided that, sigh, they should get home and so some laundry or something and they packed up children and babies and food and everyone kissed and hugged good-bye.

I've had some more anxiety today but as always, the babies have helped distract me from it. I am so lucky to have such sweet distractions. It is chaos when they are here and crazy too but nothing that a few paper towels, a broom and a dustpan, and a little super glue can't fix right up. 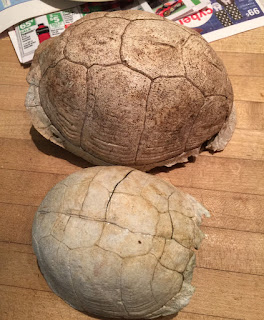 I like being a grandmother who does not have fine china to break but instead, turtle shells found in the north Florida and south Georgia woods and brought home by my husband. I remember back when our own children were young and Mr. Moon and I despaired over ever having a piece of furniture or a rug or anything, actually, that wasn't child-broke or stained and we'd say, "Well, when the kids are grown..."
And they are but now the grands are here and so it goes and we are old enough now to realize that we do not nor do we care to live in a museum where things cannot be touched and played with, where breakage represents near tragedy but are happy in our comfortable and funky surroundings, our treasures the most mundane and sturdy of objects which can and do withstand the ravages of childhood.

This is the greatest luxury of all, I think.