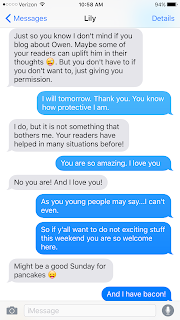 Yesterday evening right after I got home from my day in town and was putting my groceries away, Lily called and her voice was very quiet and very sad.
"Owen's doing that thing again," she said.
That thing being what was probably a seizure like he'd had over a month ago.
My heart dropped so fast and so hard. Somehow I'd known that something was going to happen yesterday. I felt it in my old bones.
"Are you going to take him to the ER?" I asked.
"I don't know," she said. "They couldn't do anything last time."
And this is true.
We've taken him to the neurologist since then and they did an hour long EEG but we haven't heard back from them and you know, being human and all, we've just sort of gone on with our lives, hoping that the incident was a one-shot deal, a mystery to leave to the ages, no harm done, etc.
Plus, you know- strep, almost-cut-off-fingers. Life.

But. Here they were. Here he was.

I said, "I'll be there in a minute," and I slammed the refrigerator door shut and got back in my car and was at Lily's house in just a few moments. I walked in to find Jason holding Owen on the couch. The boy was wrapped in a quilt and still but he reacted when I walked into the room although he didn't know exactly who I was. But he smiled. Lily was on the floor beside them, holding Owen's hand and nursing Maggie.
And we discussed going to the hospital which is what they'd done last time this happened. By the time they'd gotten to him, he has been coming back to himself and all of the bloodwork they did, all of the testing, the CT scan- none of it showed a thing and they just suggested an appointment with a neurologist, which is course what Lily did.
And so, we decided not to go to the hospital. Slowly, he was coming back to himself (I know I keep using that term, but it is just the only way I can find to describe it) and the idea of taking him to the brightly lit ER where they wouldn't really have the means to figure anything out just seemed cruel. We waited.

Eventually, he was Owen again, fully present and knowing everything he knows. He knew he'd been through something but he couldn't remember how it began or anything else about it and didn't really seem to want to talk about it.
Lily finally got to talk to the on-call nurse at the neurologist's office and she recommended they just keep Owen as unexcited as possible this weekend and get back with the doctor on Monday which was good advice.
I talked to this blog community's resident expert on all things seizure and she was calm and reassuring and helped more than she can know.
We talked to Jessie, who is a nurse, and to Boppy, who is in Georgia. Everyone so worried, but calm.

And thus, before long Owen was playing with his sister and his brother and we all took deep breaths and eventually I left and came on back home where I got in touch with Uncle Hank and with Aunt May and made a martini and put the chickens to bed and Lily sent me that beautiful picture of Owen with his sister who was eating spaghetti and she sent me that text, telling me that I can write about this if I want and how this community is always so helpful and uplifting to her.

So you know I'm crying right now.
It is the most beautiful day ever. Owen and Gibson had their last football game today and although Owen didn't play, they all went and Gibson did play. I got these pictures from Lily. 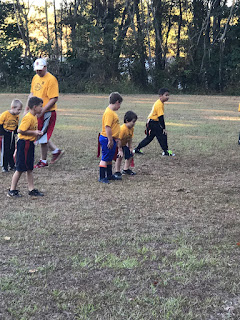 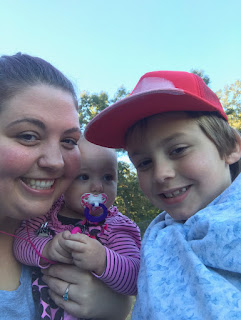 There will be no going to the fair this weekend or the Fall Festival at Owen's school either (the bouncy house- the excitement!) but that's okay. His daddy said they could draw together, which they love to do, and read stories. Maybe tomorrow they'll come over for pancakes.

The sun is shining and it's coolish, the zebra-winged butterflies are drifting about the firespike blossoms which glow crimson in the light. The leaves on the trees are glittering like gems in the breeze and the sun, and the chickens are scratching about the yard. I'm going to work in my garden today, I am going to remember to breathe and have faith that all will be well and that our darling boy is going through something that so many children go through and I know it's not going to kill him and that he is in the best possible family who love him and hold him up that he could be in. We will get it figured out.