That Was Just A Dream

A MOST exciting event happened on this day!
Well, for me.
No one else seems to be too excited. That would include Lily, Jessie, and Mr. Moon, all of whom I texted with the news and pictures.
Here's what happened. 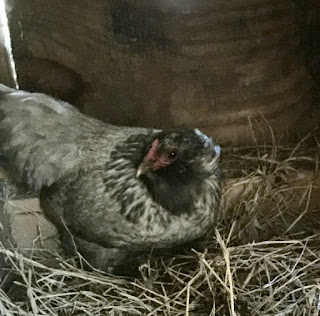 When I went to check for eggs, I found little Miss Violet on the nest, which is something I've never seen before. I've never seen any of the banties on the nest but there she was. I was so shocked that I wondered if she was sick. I backed away and gave her her privacy because none of the hens likes to be disturbed while on the nest and the banties are the shyest of all. A few minutes later I heard her calling for Otis to come and collect her and I went back in to see if she'd left me an egg. 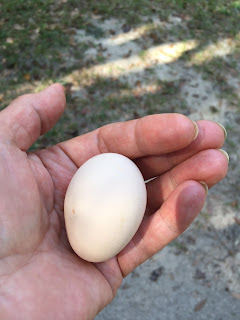 And she had! A fine little pale ivory egg. Here it is next to one of the Chi-Cha's eggs to give you the scale and color  of it. 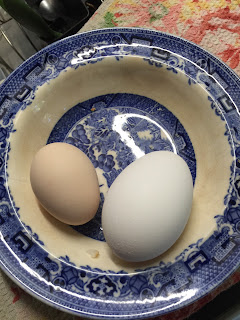 Oh, my heart! I was thrilled! You'd think that by now I'd be over this ridiculous delight over getting eggs from my chickens, but I am not. It would be like a midwife delivering her four-hundredth baby, yawning and saying, "Ho-hum. Just another baby."
Well. Not quite. But still. And this is such a darling egg. Can't you just see a breakfast for Mr. Moon made with four of these, fried up nicely next to some toast or a biscuit? And just think- if I want to make a recipe but need to increase it by half and it calls for one egg, I can use one regular egg and one of these! Right?
Oh my gosh. The possibilities are endless.

What's that you say? I need to get a life?

Oh well. Sure. There is that.

So. I didn't do nothing today which is what I threatened to do. I just took my time with everything I did. I washed clothes and rugs and bedclothes (isn't that a cozy word?) and did some sweeping, some mopping. How I love the smell of Fabuloso and white vinegar! In the morning OR the evening!
I read the article from Facebook which you can find HERE about Neiman Marcus selling frozen collard greens for sixty-six dollars plus shipping (serves 8-10) and it made me laugh and not in a bad way. In a good way! My row of sturdy collards makes me feel even richer than I did before! Ever since kale got to be the hot item and True Holy Grail of Greens, I knew in my bones that collards would be next. Of course the Neiman collards come already cooked with bacon and "just the right amount of spices."
Oh! Wait! Forget about it. They are sold out.
It's a funny world, isn't it?

And funny things are going on in the yard right now too. Mick is already in the hen house and calling for his hens and Otis is in the yard and calling too, a sort of rooster gospel call and response thing, and I just went out to see what was going on because although I don't really watch my chickens all day long, I am familiar enough with their routines to know when something is off, and damned if Otis hasn't sort of trapped Trixie and Camellia under the old shed and HE JUST JUMPED ON TRIXIE! and had his way with her and then, being all roostery and stuff, found some crumbs of old muffins I'd thrown out a little earlier and was tid-bitting for her and she is traumatized and having none of his muffin crumbs and hiding on the kitchen porch and that's why Mick is calling. Trixie is his favorite wife and she always sleeps right by him and he doesn't know where she is. Otis is a sneaky boy and if Mick knew what he'd just done- well, it wouldn't be pretty. But this is the way of the rooster and I can't judge it by human standards and quite frankly, rooster behavior is far more understandable to me than human behavior for the most part.

In the time it's taken me to write this, I believe that Otis covered Camellia too and now everyone has quieted down. The sun has set and the light is fading to the west and I feel peaceful. The World Series is over and since my husband is out of town I can watch whatever I want to on the TV without guilt while I eat my supper of delicious leftovers which is going to involve an avocado and then I can get in my bed with its old and clean sheets and read my old, old Larry McMurtry book and tomorrow I'm going to town to return the flour-sack sheets and I found the receipt today so hurray! And I need to buy an old blanket of some sort to be the middle part of Gibson's name blanket I'm going to be making him which means going to the Goodwill and also...the library! And maybe lunch with some of my kids and grandkids.

Yeah. It doesn't get much better than this for an old hunting widow in North Florida in the early days of November as another year gets closer to an end. I ran into an old friend from the very old days in Publix a few days ago. This is a woman who was at two of my births and I was at one of hers. One of the most wonderful and delightful births I've ever attended where her husband delivered their breech-presenting son in the loft of their handbuilt house- a complete and utter hippie home birth- and as we talked and blocked the aisle, I began to weep a bit. We were discussing aging and its pains and aches and she told me that she has a real, true heart condition and has to walk with a cane and how her youngest son (that boy I saw get born butt-first) is completely redoing her kitchen and how we really were not supposed to live this long and I said, "But you need to keep living because you still have grandchildren coming who need to know you," and then our tears flowed like crazy and we were a scene right there in the grocery store and I am thinking about that. And how her MOTHER is still alive and how so much of it is all like a dream.

Oh. Life.
And I think it's time for me to repost my favorite music video of all times, the video for which music videos were invented.


Oh, Mr. Moon. See what happens when you leave town?