Lord, I Need To Get A Grip 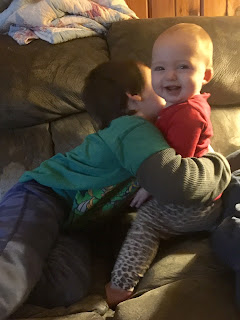 As the sun goes down my anxiety and fear rise and although I was able for most of the day to push things aside in order to be fully present for these two, I'm here alone now and it's just hard.
I don't mind being alone, I love solitude, but these nights when the sun goes down so suddenly early leave too much dark night time ahead of me and it keeps hitting me over and over again that this thing has really happened, that that man is the President Elect and just seeing pictures of him in the White House with the president I have come to love and respect above all of the others makes me sick and sad and horrified.

There is still no sense to be made of any of it. There's no one person or group of people to blame, to violently shake my finger at and hate.
I wish I could. God, that would feel so good.
I did shoot a bird at my neighbors' house when I drove by today, their Trump/Pence sign still proudly stuck into their yard a few feet away from their permanent Easter sign which proudly proclaims, "He is RISEN!"
It didn't help.

Lord, I'm sucking at life right now. You want to know how bad I'm sucking at life? I drove through McDonald's and got Gibson a fucking happy meal after I picked him up at school. And if that's not bad enough, I ordered a damn filet o' fish for myself AND a small order of french fries.
I have to admit that the filet o' fish was pretty tasty but the fries sucked.
I bet it's been forty years at least since I had a fish sandwich at McDonald's.
Yeah, well, it'll be another forty years before I have another at which point I'll have been dead for a very long time although I have no doubt that there will still be a McDonald's but the point IS, I've dropped to new lows fueled by the feeling that what the hell can matter now? I mean, we're screwed.
And not even just by the fact that DT is going to be president with a Republican house and senate.
Nah, nah, that's just really fucked up.
No, the we're screwed thing is that so many of us in this country hitched a ride on the hate train for whatever reason or reasons and that didn't happen because they're happy and loving people with humanity's best interests at heart and it was so nice to be able to pretend that sure, there were definitely pockets of haters here and there who wished harm to others because of their race or gender or sexual preference but THOSE WERE THE EXCEPTION and overall, well, golly gosh by gum, this is just a great nation and mostly made up of real good folks who don't care what color your skin is and just love a good 4th of July parade and who doesn't?! Pass the potato salad, y'all! Everyone loves potato salad! And watermelon too!

So. I remember after Katrina and someone said something like the way that had been handled and what the aftermath revealed had let the whole world see American's dirty underpants and I keep thinking about that and how this election has not just shown the whole world our dirty underpants but the fact that we're not even wearing any.
We ain't that civilized.
And we haven't bathed in centuries.

It just occurred to me that perhaps DT's presence in the White House will just magically take care of that so-called immigration problem. Who the hell would want to come live here now?
See? His plan is already working!
Let me be the first to point that out.
You're welcome!

But here we are and what's done is done and I don't have any answers except the same one I always have which is to love each other and especially the babies. Get their tanks filled up now with the pure good juice of it so that when they grow up they aren't as apt to have any room for the hate and the anger which leads to more hate and anger and shit like this happening.
I will say that if people were not as scared about health care and where their next meal is coming from and where they're going to lay their heads at night and how their children are going to be able to support themselves they might not be so inclined to be blinded by hate mongers but that's the sort of thing that the government has to deal with and our government is too busy dealing with things like preventing women from receiving health care and making sure that people use the bathroom that corresponds to their birth-genitals and guaranteeing that any asshole with a mental illness can buy an assault weapon and that we're protected from the perils of legal weed and that pharmaceutical companies and insurance companies can have real good years to prove to the stockholders that they're doing their job and that we have plenty of bombs in the old stockpile for someone like DT to come along and decide to see what happens if he punches in those codes and that the ultra rich can hold on to their fortunes to worry about basic human needs. And rights.

Hmmm...
Maybe I'm in the anger phase of grief?

Possibly. And in ten minutes I'll be back in denial and then perhaps I'll try bargaining,  and of course depression is always waiting in the wings, make-up in place, script memorized.

Will I ever get to acceptance?

I fucking hope not.

Well, the moon is rising up, big-bellied and if she were a woman, she'd be eight months pregnant and she doesn't care what's going on here. She's going to pull her tides and create her havoc and inspire lovers and make my cats crazy and disturb our dreams no matter what.
That's sort of reassuring.
Right?

Oh. Maybe this is all just a super moon dream and we'll wake up and it'll all be okay.

What stage are you in?