WHAT AM I SUPPOSED TO BE DOING?

My mind is all over the place and I can't focus on one damn thing for one damn minute and the phrase "lost her marbles" is a pertinent one as I keep imagining my head splitting open and marbles galore spilling onto the floor, rolling everywhere as I frantically try to pick them up and return them to where they belong.
Rattle, rattle, rattle.

Anyway, last night we went to a new restaurant which is, in fact, quite close to Lloyd via interstate, to celebrate Jason's birthday. I've been watching them get ready for months and was amazed to see that one of the first things they did was to plant a beautiful vegetable, herb, and flower garden in front of the building. Lis and I went there a few weeks ago and I took pictures but never got around to posting them. Last night after we ate (and the food is delicious and fresh and they do use the vegetables from the garden and from beds planted in back, as well), Owen and I took a stroll around the garden and we kept discovering new things. The owner came out to do his own evening stroll of the garden and he talked with us and we also got to talk to a guy who was actually working in the garden and who, I believe, had originally helped plant it. The pine logs use to delineate the beds came from his property in Sopchoppy. So many herbs and flowers as well as squashes and melons and greens and okra and beans and tomatoes and peppers and...well. It put my garden to shame. I was proud of Owen because he could identify a lot of the plants. That boy has been paying attention. 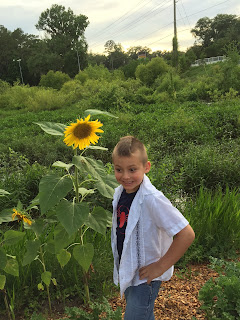 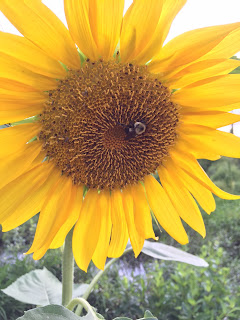 Happy bee.
Behind Owen in that picture there you can see a swamp or a marsh which, right now, is filled with water from our recent rains. It was just beautiful. We ate on a sort of porch with a view of the marsh and my only complaint was that it was so loud. I can't take that sort of distraction any more. But, still. Here's a beautiful picture of Boppy feeding a bottle to Maggie who was stunning in her little sailor suit. 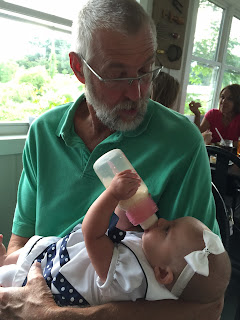 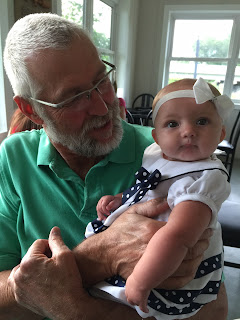 Oh! The name of the restaurant is Backwoods Crossing. Check it out if you live around here.

After supper and the garden tour, we met back up at Lily and Jason's house for delicious cake which Lily had made and ice cream. 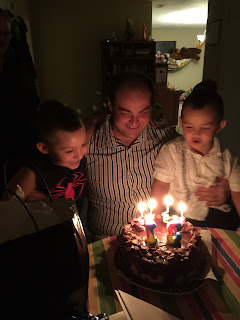 I think Jason enjoyed his birthday. I sure did. After all of the supper and the drink and the cake, I could barely crawl to the car and when we got home, I couldn't even unload the dishwasher but fell into bed where I started reading a new book that I am loving.
The Last Four Days Of Paddy Buckley.
Don't read it if you can't deal with what happens in mortuaries and funeral homes. Not in a bad way, just in the regular way of what happens to our bodies after we die. But if you liked Six Feet Under, you'll be fine.

So. That's it from me today. I have this feeling that there are about a million things I should be doing because, oh yeah, did I mention that a week from today I'll be on my way to Cuba?
I might have.
I have no idea what we're supposed to bring or not bring. Lis and I will not be staying in a hotel but in different rooming arrangements and I am throwing myself to the gods of mercy in that I sincerely doubt there will be air conditioning, not to mention the fan that I go NOWHERE without my little fan which runs beside my bed every night. Y'all- I am stepping so far out of my comfort zone that it's not even within my ken to imagine.
Fuck it.
Havana.
I suppose I should at least get my suitcase back from May. I would love to find one dress that I can wear to the gigs that will be cool in the sense that I won't die of sweating in it and which also makes me feel at least a tiny bit pretty. Long. Lis will be wearing her petticoats and you can bet on that.

I better get off my ass and get going, retrieving those spilled marbles as I go, as best I can.